In a video of the honorary departure, the two couples stood and chatted for a few moments, even laughing, on the steps before the Pences got into a vehicle and were driven away.

The honorary departure involves the incoming vice president sending off the outgoing vice president and would have involved former President Donald Trump bidding farewell to President Joe Biden as well, though Trump did not attend the inauguration ceremony.

Instead, he and his wife, Melania left the White House early Wednesday morning for Joint Base Andrews. He gave a campaign-style farewell speech before boarding Air Force One for a final time as president and traveling to his Palm Beach club, Mar-a-Lago.

Pence opted not to attend that event and instead attended Biden’s inauguration.

Earlier that day, calm prevailed outside heavily fortified state capitol buildings across the U.S. as Biden and Harris were sworn in. 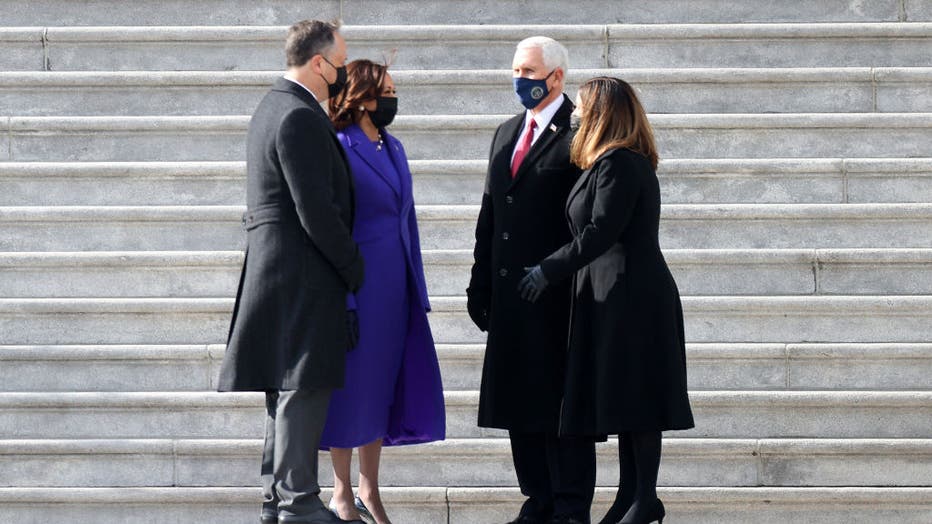 The FBI had warned of the possibility for armed demonstrations leading up to the inauguration after Trump repeatedly and falsely claimed the election was stolen from him.

Fewer than a half-dozen demonstrators showed up outside the capitols in Concord, New Hampshire, and Lansing, Michigan. A lone protester wearing a "Make America Great Again" hat stood outside a chain-link fence surrounding the California Capitol in Sacramento, as dozens of police officers and National Guard troops guarded every entrance.