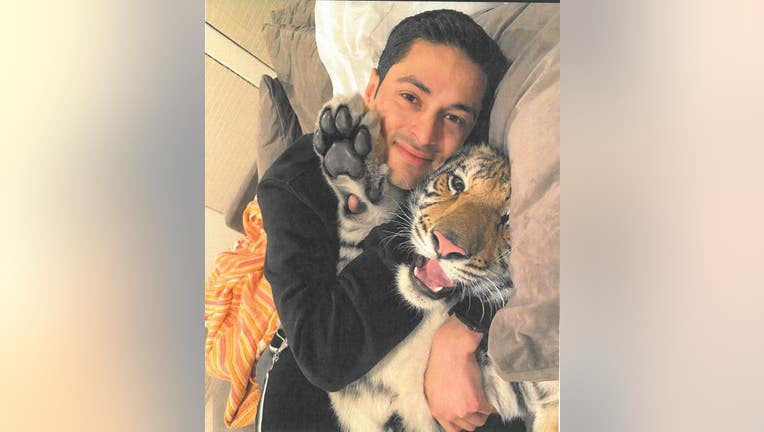 HOUSTON - It's been almost a month since headlines hit about a tiger roaming the streets of west Houston. And while the big cat has since found sanctuary in a wildlife preserve, the man involved in the entire case, Victor Cuevas, shared a love letter opening up about India, the 9-month-old Bengal tiger.

The story itself has a lot of twists and turns with claims of who India belongs to and where the tiger was during its nearly week-long disappearance but Cuevas' letter strongly demonstrates his affection for the 9-month-old.

"India, although I might never get to run with you again, never get the chance to swim with you, ever hear your chuffs in person, never dance with you and make funny videos to send to your mom, I thank you for the love you showed us, the memories we made, your kisses," Cuevas writes.

Man plays with tiger that is still missing in Houston

Video has been released of a man playing with a tiger that hasn't been seen since video of it walking the streets of a Houston neighborhood went viral.

The entire scandal began after Houston police received a report on Sunday, May 9, about a tiger on Ivy Wall Drive near Riverlace Drive.

Prior to the officers' arrival, video shows the tiger walking in front of a house. Cellphone video also shows an off-duty deputy confronting the tiger. The deputy then can be seen with his gun out, but he never fires.

Officers say 26-year-old Cuevas was then seen escorting the tiger into a home and later put him in his vehicle before driving away. A brief chase ensued, but law enforcement lost him. It was later confirmed Cuevas has previously bonded out of jail on a murder charge in Fort Bend County back in 2017.

He bonded out of jail soon thereafter but, Cuevas' attorney, Michael Elliott, said India did not belong to his client and didn't know where the tiger was.

This, in turn, led to several eyebrows raised as to who India's actual owner was, which complicated matters further when a video of Cuevas playing with the tiger was shared with FOX 26 and photos provided by his attorney of India in his home, having his own bed and even cuddled with Cuevas.

RELATED VIDEO: Tiger seen playing with murder suspect prior to his arrest

A day before Elliott shared those videos, a Fort Bend County judge reset his previous murder charge to $300,000 and he was back behind bars.

The next day though, India the tiger was found safely and turned over to Cleveland Armory Black Beauty Ranch in Murchinson, Texas.

Confusion as to ownership of India arose once again when Elliott doubled down on his comments of Cuevas owning the big cat; especially after the Houston Police Department strongly suggested it was.

In a shocking turn of events, a missing tiger was finally found after several days and our Matthew Seedorff tells us that despite Victor Cuevas' attorney claiming it did not belong to his client, Houston police are confirming otherwise.

And Cuevas' affectionate Instagram post with pictures of him holding India close certainly paints the picture of the two sharing a once seemingly inseparable bond.

"I’ll always hug your pillow at night and I’m very grateful for the 1 in a million bond we shared. That will forever live within me and through the grace of God I can of [the] day make good on my promise to you," Cuevas' post continues. "We love you with all of our entire hearts little boy, always and forever."