Viral video captured the heartwarming moment a group of Philly dads comforted a nervous student on the first day of school.

PHILADELPHIA - A new mural outside of Allen M. Stearne school displays a beautiful array of colors, including the quote, "Enter as a caterpillar, emerge as a brilliant butterfly." However, one young student needed a little extra motivation on his first day of school.

"It was just a magnet feeling, you saw him going through something we all felt before, we all felt this, and when we saw that we just all gravitated to this kid," says James Wells.

Wells joined a group of fellow dads with non-profit "Dope People Doing Dope Things" and Peace and Love Attire that lined up outside Stearne Elementary to greet the students on Tuesday. They gave out high-fives along a red carpet and handed out school supplies. 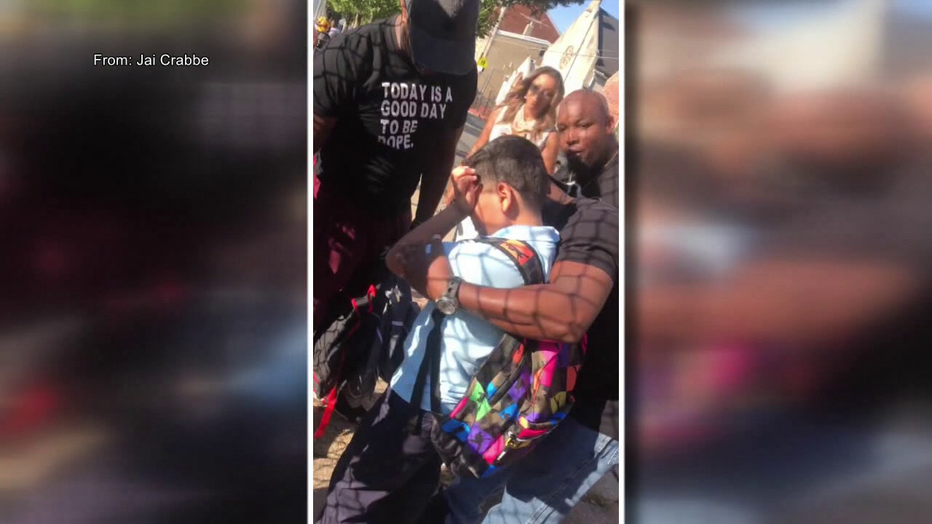 At one point, they spotted a student clearly having a hard time. Jai Crabbe saw the group approach the boy and took out her cell phone to start recording.

"It was one of the best moments I have ever experienced, it was just so genuine," says Crabbe.

"When we see him crying, the innate nature in me was just go give him a hug, a lot of kids don’t get hugs in the morning," says Patrick Faulkner.

In the video, you can see Faulkner immediately hugging the child. One father compliments his Fortnite bookbag and another says, "we have the same shoes!" They encourage him to wipe his tears, and clap and cheer as he walks away.

"If we can affect just one child, our job is done," says Miller.

The video went viral on a number of social media pages, including the House of Highlights Instagram page, where it has almost 2 million views.

However, the dads say their real accomplishment is sending the student in with a smile.

"Our goal is just to show kids that there is love outside of the family, the community loves them too, and if we rally together as a community we are all pretty much family."