MINNEAPOLIS - Amid several days of protests that have erupted across the country in response to the death of George Floyd, who died after a Minneapolis police officer held a knee on his neck on Monday, many residents of Minneapolis took to the streets to clean up their neighborhoods.

As thousands marched around the country to condemn the death of Floyd, who died during an arrest over an alleged counterfeit $20 bill, some of the demonstrations in Minnesota turned violent as protesters looted buildings and torched a Minneapolis police station on Thursday.

RELATED: ‘We must be better’: Former President Barack Obama issues statement on death of George Floyd

In the wake of the destruction, Marvin Applewhite, a resident of Minneapolis, posted pictures on Facebook of himself and several other volunteers going around the city cleaning graffiti and picking up trash.

Applewhite set up a Gofundme to raise money for cleaning supplies such as brooms and trash bags in order to continue the work he and others started.

Another video posted on Twitter by a Turkish journalist showed volunteers picking up trash and debris as a line of riot police stood guard right in front of them.

A Getty photo showed people, including one individual dressed as Spiderman, sweeping sidewalks in Minneapolis after the protests. 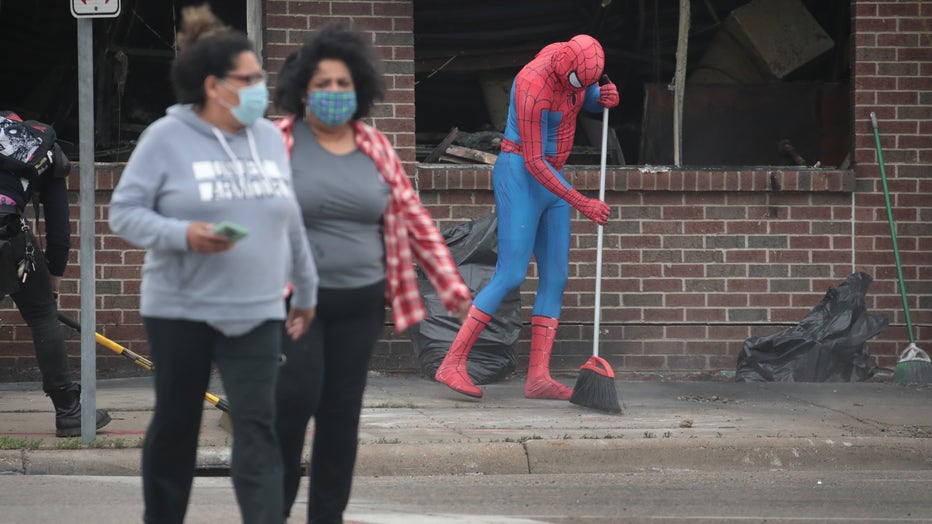 FILE - A person dressed as Spiderman sweeps the sidewalk as residents help to clean up following a night of rioting sparked by the death of George Floyd while in police custody on May 29, 2020 in Minneapolis, Minnesota. (Photo by Scott Olson/Getty Images)

After several days of protests, FOX 9 Minneapolis-St. Paul reported that rioters had damaged more than 170 businesses in St. Paul.

The destruction prompted Governor Tim Walz and the mayors of both Minneapolis and St. Paul to implement curfews in the Twin Cities from 8 p.m. until 6 a.m. except for first responders, members of the media, and people going to and from work.

Walz said anyone caught violating the order will be placed under arrest.

This story was reported from Los Angeles. FOX 9 Minneapolis-St. Paul and The Associated Press contributed to this story.