MINNEAPOLIS - Protesters took to the streets across America again Sunday, with violence flaring in pockets of largely peaceful demonstrations fueled by the killings of black people at the hands of police. A truck driver — apparently deliberately — drove into demonstrators in Minneapolis nearly a week after George Floyd died there after pleading for air as an officer pressed a knee into his neck.

Protests sprang up from Boston to San Francisco, with people stealing from stores in broad daylight in Philadelphia, cities across California and elsewhere. In Minneapolis, the tanker truck sped into a peaceful crowd of thousands on a closed highway, but no one appeared to have been hit, authorities said.

The Minnesota State Patrol tweeted that the driver was apparently trying to provoke protesters and was arrested. Protesters swarmed the truck and jumped on the hood, even as it kept moving. Police then came in force to clear the highway in the city where violence erupted after the death last week of Floyd, who was black. The protests quickly spread to dozens of cities large and small, and have lasted for days.

RELATED: 'We cannot hurt him' plea as driver pulled from truck that sped into Minneapolis protest

The officer who pressed his knee onto Floyd's neck for several minutes has been charged with murder, but protesters demand the other three officers at the scene be prosecuted. All four were fired.

“We’re not done,” said Darnella Wade, organizer for Black Lives Matter in neighboring St. Paul, where thousands gathered peacefully in front of the state Capitol. “They sent us the military, and we only asked them for arrests.”

Minnesota's governor brought in thousands of National Guard soldiers to help quell violence that had damaged or destroyed hundreds of buildings in Minneapolis over days of protests. The immense deployment appeared to have worked Saturday night, when there was comparatively little destruction.

On Sunday, in a display of force, long lines of state patrolmen and National Guard soldiers were lined up in front of the Capitol, facing the demonstrators, with perhaps a dozen military-style armored vehicles behind them.

For a second day, the protests reached to the White House, where chants could be heard from around 1,000 demonstrators just across the street in Lafayette Park as they faced police in riot gear behind barricades. The scene was defiant but peaceful, though police used flash bangs to stop another group from reaching the park.

Outside the White House, Gabrielle Labrosse-Ellis, 30, from Maryland, held a sign that said, “Humanize black lives.”

“This is unacceptable. This is the last straw,” she said. “It has to be.” 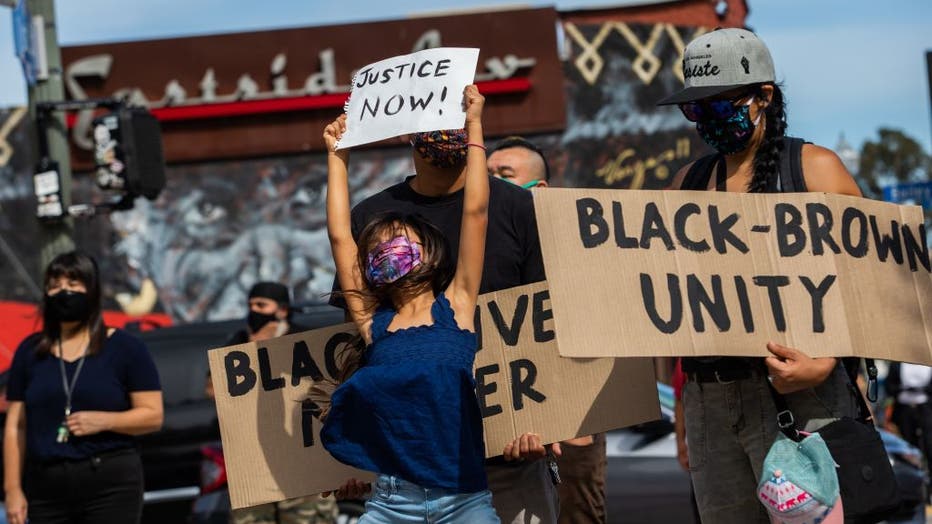 A girl jumps holding a sign (Justice Now!) while she and her family protest in the Boyle Heights neighborhood of Los Angeles on May 30, 2020 in response to the death of George Floyd. (Photo by APU GOMES/AFP via Getty Images)

Labrosse-Ellis said she planned to leave before dark because she feared a repeat of the violence that occurred Saturday night.

“They keep killing our people,” said Mahira Louis, 15, who marched with her mother and several hundred others through downtown Boston. “I’m so sick and tired of it.”

Disgust over generations of racism in a country founded by slaveholders combined with a string of recent racially charged killings to stoke the anger. Adding to that was angst from months of lockdowns brought on by the coronavirus pandemic, which has disproportionately hurt communities of color, not only in terms of infections but in job losses and economic stress.

The droves of people congregating for demonstrations threatened to trigger new outbreaks, a fact overshadowed by the boiling tensions.

“Maybe this country will get the memo that we are sick of police murdering unarmed black men,” said Lex Scott, founder of Black Lives Matter Utah. “Maybe the next time a white police officer decides to pull the trigger, he will picture cities burning.”

An unidentified man in Salt Lake City was captured on video brandishing a bow and arrow George Floyd protesters.

The scale of the protests, sweeping from coast to coast and unfolding on a single night, rivaled the historic demonstrations of the civil rights and Vietnam War eras.

Curfews were imposed in major cities around the U.S., including Atlanta, Chicago, Denver, Los Angeles, San Francisco and Seattle. About 5,000 National Guard soldiers and airmen were activated in 15 states and Washington, D.C. 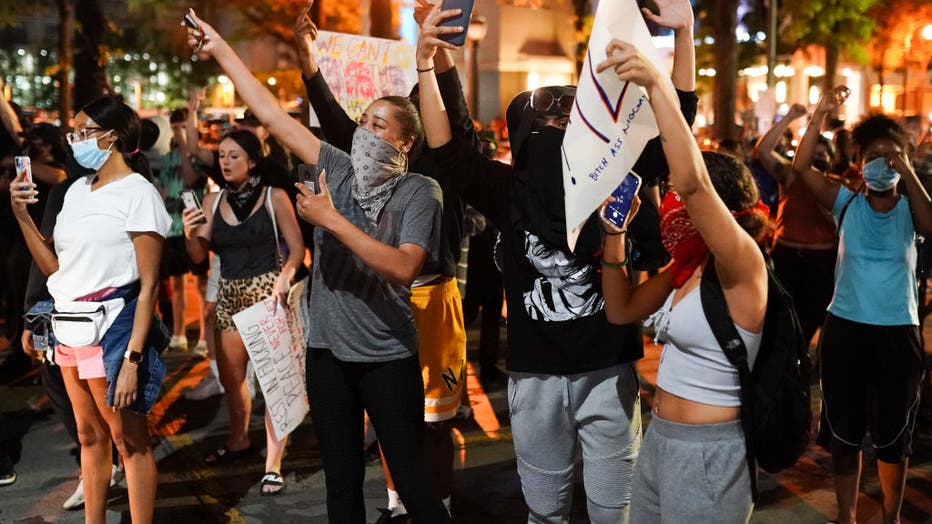 People protest in response to the police killing of George Floyd on May 30, 2020 in Atlanta, Georgia. (Photo by Elijah Nouvelage/Getty Images)

There was looting on both ends of California, with video in San Jose showing several people in hoods and masks fleeing a Macy’s department store with large bags, while people in Long Beach carried away armloads of clothing and other goods from the smashed windows of stores at a shopping mall after curfew. As police moved in to try to restore order, some protesters ran in to confront the thieves and condemn them for undercutting the message of the demonstration. 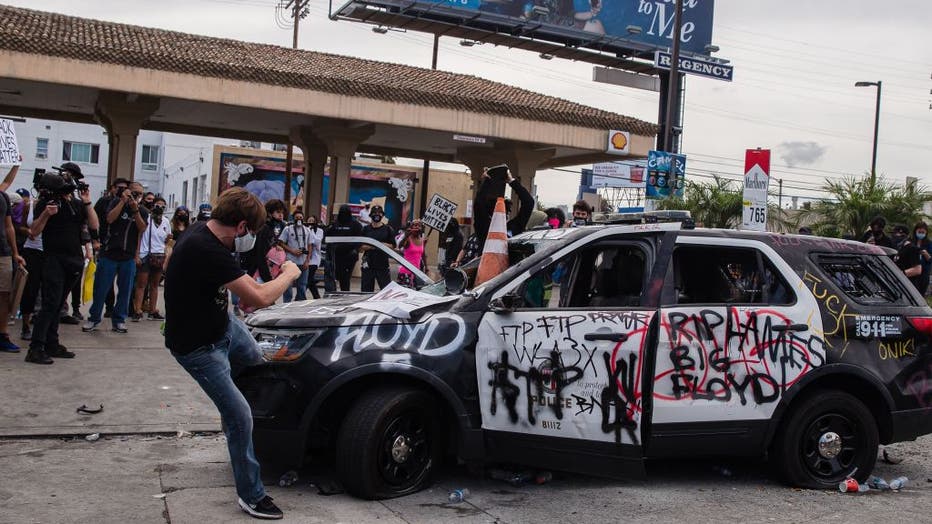 A demonstrator kicks a damaged police vehicle in Los Angeles on May 30, 2020 following a protest against the death of George Floyd, an unarmed black man who died while while being arrested and pinned to the ground by the knee of a Minneapolis police (Photo by ARIANA DREHSLER/AFP via Getty Images)

In tweets Sunday, Trump blamed anarchists and the media for fueling the violence. Attorney General William Barr pointed a finger at “far left extremist” groups. Police chiefs and politicians accused outsiders of coming in and causing the problems.

At the Minneapolis intersection where Floyd was killed, people gathered with brooms and flowers, saying it was important to protect what they called a “sacred space.” The intersection was blocked with the traffic cones while a ring of flowers was laid out.

Among those descending on Minneapolis was Michael Brown Sr., the father of Michael Brown, whose killing by a police officer in Ferguson, Missouri, set off unrest in 2014.

In Indianapolis, two people were reported dead in bursts of downtown violence, adding to deaths reported in Detroit and Minneapolis in recent days. 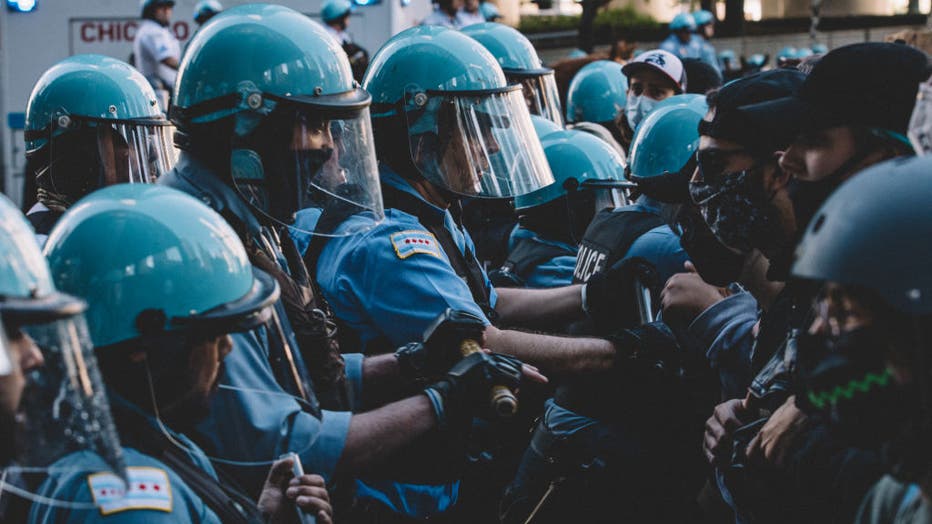 Protesters clash with police in Chicago on May 30, 2020 during a protest against the death of George Floyd, an unarmed black man who died while while being arrested and pinned to the ground by the knee of a Minneapolis police officer. (Photo by Jim Vondruska/NurPhoto via Getty Images)

Buildings around the U.S. were defaced with spray-painted messages, from the facade of St. Patrick's Cathedral in New York to the historic Hay-Adams hotel near the White House. Some of Floyd's gasped last words — “I can't breathe” — were repeated, alongside anti-police messages.

Associated Press journalists across the U.S. contributed to this report.