Prop weapons bring a sense of realism to the set of a movie or TV show, allowing actors to portray more convincing fight scenes involving guns, knives, spears, swords, or bows and arrows.

Prop weapons that portray sharp edges are typically dulled or made of softer materials like plastic. But prop guns can be either a fake gun or a real gun modified for prop use.

A prop gun produces the same loud bang and a muzzle flash as real guns, but they fire blanks. Instead of a bullet, prop guns fire soft projectiles like paper or plastic wadding. 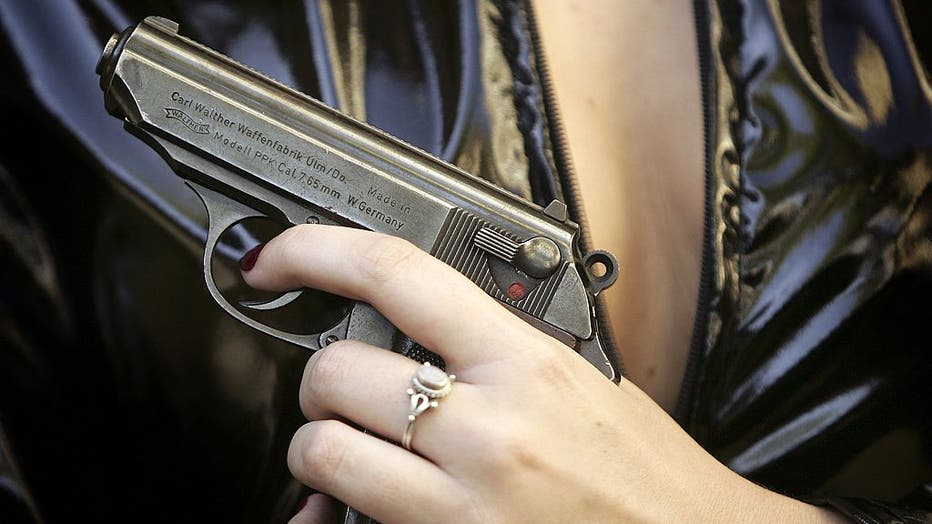 Leonie Ashfield from Christie's auctioneers poses with a prop Walther PPK handgun from 'From Russia With Love' during promotion of a sale of weapons from James Bond films on Nov. 2, 2006 in London. (Photo by Peter Macdiarmid/Getty Images)

Prop weapons greatly reduce the threat of bodily harm while performing, but they don’t eliminate the possibility entirely.

According to Yale, a prop projectile can still carry deadly force if fired at close range. Thursday’s incident involving Alec Baldwin on the set of the movie "Rust" is just the latest reminder of how dangerous these props can still be.

Authorities confirmed Baldwin fired a prop gun that killed cinematographer Halyna Hutchins and wounded director Joel Souza. Incidents like this are rare, but not unheard of.

In 1984, actor Jon-Erik Hexum died after shooting himself in the head with a prop gun. Hexum, 26, was filming a scene for the show "Cover Up."

Brandon Lee, the son of Bruce Lee, died at the age of 28 after being shot with a prop gun during an on-set accident in 1993. Lee was filming a death scene for the movie "The Crow" when tragedy struck.

The prop gun was supposed to fire a blank, but an autopsy revealed the actor had been struck by a .44-caliber slug. The bullet was found lodged near his spine, NPR reported.

A helicopter crash killed actor Vic Morrow and two child actors on the set of "Twilight Zone" in 1982. Morrow and the children were killed while filming a scene set in Vietnam for the film based on the popular television series of the same name.

Debris from a staged explosion flew into the air and damaged the helicopter’s rotor. The industry responded by introducing new safety measures governing the use of choppers while filming.

In February 2014, camera operator Sarah Jones was run over by a train during the filming of a Gregg Allman biopic in rural Georgia.

Other crew members were injured by pieces of a metal bed frame that was on the train tracks as part of the shoot. The crew filming "Midnight Rider" did not have permission to be on the tracks but were not expecting a train while filming the bed scene.

Prosecutors charged director Randall Miller with involuntary manslaughter and criminal trespassing. He pleaded guilty and served a year of his two-year prison sentence.

Dion was struck and killed in Omaha, Nebraska — becoming the first person killed in the history of the show. His death prompted the U.S. Occupational Safety and Health Administration (OSHA) to recommend additional training and safety instruction for the show’s crew members, including on how to film shootings from farther away.

A February 2013 helicopter crash claimed the lives of three people who were filming a reality TV show for the Discovery Channel.

The aircraft crashed in a remote river valley north of Los Angeles. The pilot was not wearing night-vision goggles and had reduced visibility on the moonless nights. Federal investigators also determined a light used to brighten an actor’s face hampered the pilot’s ability to fly.

The National Transportation Safety Board (NTSB) initially faulted the pilot for flying in unsafe conditions. But they later rescinded that ruling when they pointed to a Federal Aviation Administration inspector who failed to recognize the risks involved when he approved plans for the shoot.