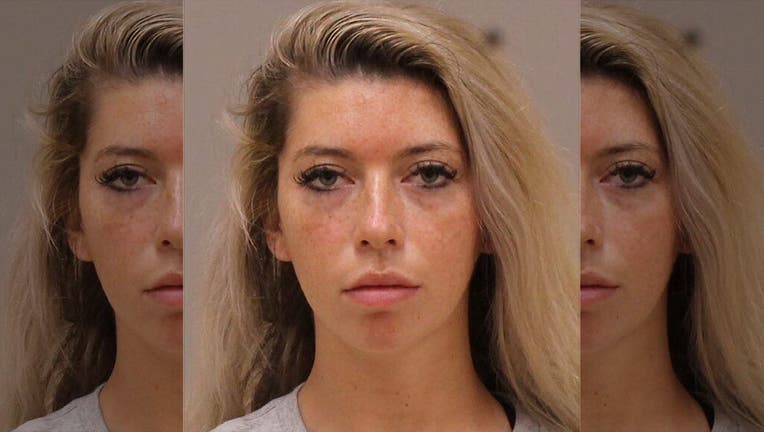 GRAND RAPIDS, Mich. - A 22-year-old woman was charged Tuesday with inciting a riot and malicious destruction after she posted a video on Facebook Live encouraging others to loot and destroy businesses during a violent demonstration in Michigan.

According to her arrest affidavit, Alexandria “Ally” Lyons can be heard telling her friends to throw bricks and other objects at the windows of multiple businesses in downtown Grand Rapids. She also picks up a brick and contemplates going to the courthouse with it.

On Saturday night about 100 businesses were destroyed. Seven police vehicles were set ablaze and several dumpster fires also were set and spread to nearby structures. The Michigan National Guard, Michigan State Police and Grand Rapids Police were on high alert protecting the downtown area from other incidents.

Police said Lyons can be seen on video kicking in the glass window of a store, causing it to shatter and leaving a hole in its place.

Lyons also is accused of looting several stores during riots stemming from protests seeking justice for the death of George Floyd.

Police said Lyons can be heard in the video encouraging people to break into an ATM, according to reports by MLive. She and several of her friends also are seen stealing from a jewelry store where the glass display was shattered.

"Defendant could be heard telling her friends to get her a gold bracelet because she already has silver ones,” police said in the affidavit.

She later posted a video of herself at a party at her house after the riots; stolen clothing from F. David Barney Clothiers is visible.

Related: ‘He tries to divide us’: Mattis blasts Trump in letter, suggests president is threat to Constitution

Police said they found a shirt from the store in Lyons’ home.

During the looting spree, authorities said Lyons and her friends helped themselves to beers from Mojo’s Dueling Piano Bar and Restaurant and photographed themselves doing so.

Lyons can face up to 15 years in prison if convicted on the charges.

At least seven people were arrested during the riots, but only two are currently facing charges.

Adrian Keech Baker, 18, was charged with rioting, larceny in a building and malicious destruction of property after he was caught shattering the front glass window of a coffee shop, police said in court records.