Dashcam video shows a wooden board flying off a truck and crashing into another driver's windshield. (Credit: Fox 8 News)

COLUMBUS, Ohio - Shocking video captured the terrifying moment when a wooden board flew off of a truck carrying it and impaled the windshield of another car.

Kim Awada was traveling on the I-80 in Portage County, Ohio on June 17 after a day out shopping with her friend, who was in the passenger seat, when suddenly, the board came hurtling at her car and crashed through her windshield.

Miraculously, no one was hurt.

Awada’s dashcam video showed the moments leading up to the accident as the wooden board was seen flying in the air after becoming dislodged. 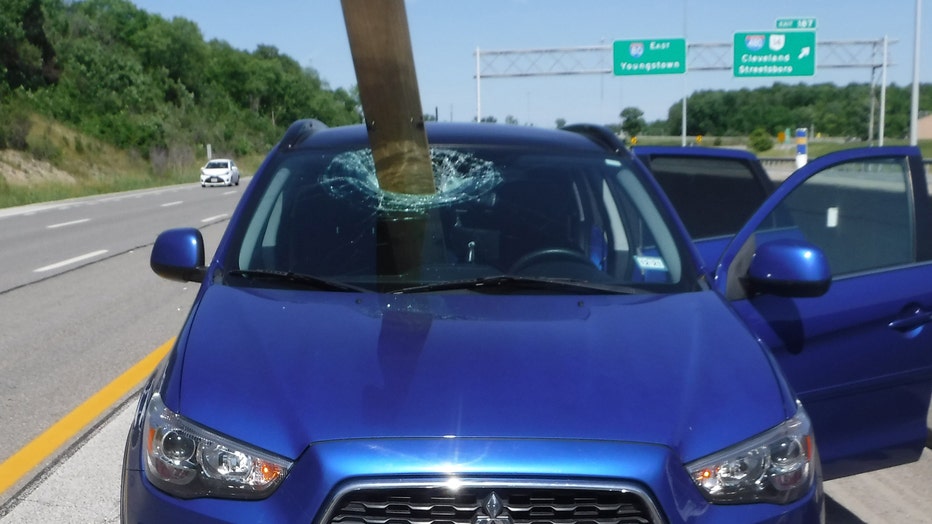 Photo of the wooden board that impaled Kim Awada’s car. (OSHP)

The plank board then crashed into Awada’s windshield, almost impaling the passenger sitting inside.

"When I seen it coming at me, I just turned the wheel and I thought if I could just get it in between us instead of hitting us, it was just by the grace of God it didn’t hit us," Awada told FOX TV Stations.

And thanks to Awada’s quick thinking, the board landed right in between the driver’s and passenger’s seats.

Ohio State Highway Patrol Sgt. Ray Santiago told Fox 8 that state troopers are monitoring the roads for this specific type of incident because while it does not happen often - it does happen.

"They don’t happen, you know, very frequently but when they do, you know it’s two times too many," Santiago told Fox 8.

And the penalties that come along with such an incident appear to be a mere slap on the wrist. 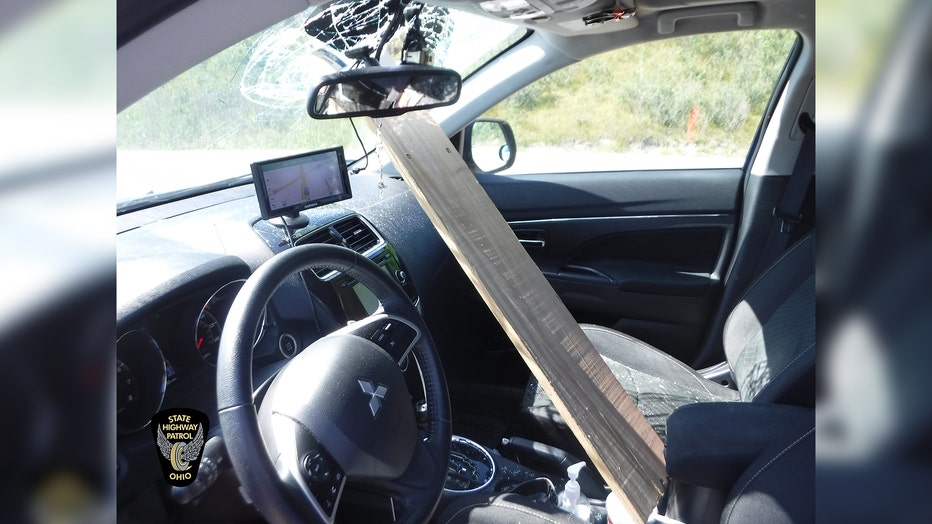 Board seen inside Awada’s car.

Under current Ohio law, the charge of traveling with an unsecured load is a minor misdemeanor that carries a fine of up to $150, Fox 8 reported.

However, a new bill introduced this year could change that.

A bill that is in committee in Ohio was introduced by District 7 State Rep. Thomas Patton in February that would increase the penalty for an unproperly secured load on a vehicle to $500 if no one is impacted.

"What I wanted to really stress is we need to change the laws and the laws need to be stricter and people need to be held accountable," Awada told FOX TV Stations.

The driver of the truck with the wooden boards was cited and made sure the rest of the load was properly secured before leaving the scene, according to Fox 8.