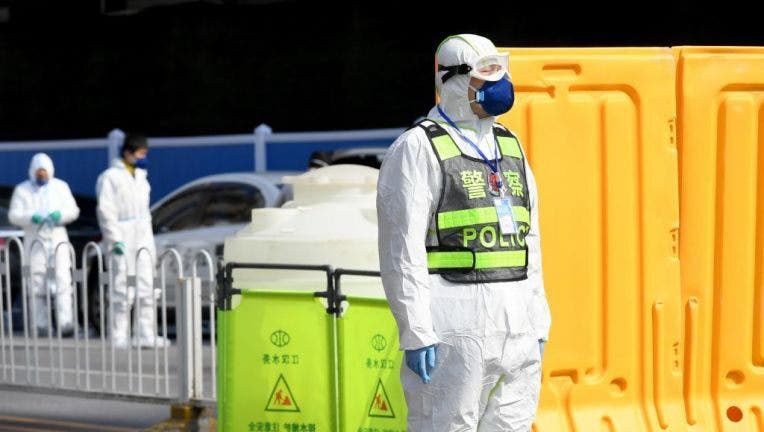 A police officer wearing protective mask and suit is on duty during disinfection work at Huanan Wholesale Seafood Market on March 4, 2020 in Wuhan, China. (Photo by An Yuan/China News Service via Getty Images)

NEW YORK - A World Health Organization expert says the coronavirus is unlikely to have leaked from a Chinese lab and most probably jumped to humans via an intermediary species.

WHO food safety and animal diseases expert Peter Ben Embarek made the assesment in a summation Tuesday of a WHO team’s investigation into the possible origins of the coronavirus in the central Chinese city of Wuhan, where the first cases were discovered in December 2019.

The Wuhan Institute of Virology has collected extensive virus samples, leading to unproven allegations that it may have caused the original outbreak by leaking the virus into the surrounding community. China has strongly denied that possibility and has promoted unproven theories that the virus may have originated elsewhere.

Along with the institute, the WHO team that includes experts from 10 nations has visited hospitals, research institutes, a traditional market tied to the outbreak and other sites.

The visit by the WHO team took months to negotiate after China only agreed to it amid massive international pressure at the World Health Assembly meeting last May, and Beijing has continued to deny calls for a strictly independent investigation.

Chinese authorities have kept a tight hold on information about the possible causes of the pandemic that has now sickened more than 105 million people and killed more than 2.2 million worldwide.