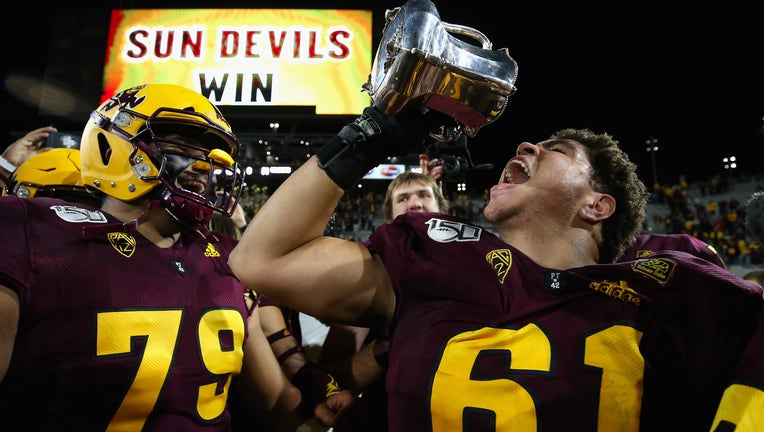 Offensive lineman Dohnovan West #61 of the Arizona State Sun Devils celebrates with the Territorial Cup following the NCAAF game against the Arizona Wildcats at Sun Devil Stadium on November 30, 2019 in Tempe, Arizona. The Sun Devils defeated the Wil

TEMPE, Ariz. - Arizona State’s offense sputtered throughout the first half. The few times the Sun Devils had good field position or got a little momentum, they stalled and settled for field goals.

When the second half started, they decided to stop trying to pick apart rival Arizona and just run them over with Eno Benjamin.

Benjamin ran for 168 yards and two touchdowns, helping Arizona State grind out a 24-14 victory over rival Arizona on Saturday night.

“The second half after the first drive, I went to Eno: ’it’s your game, it’s your time to eat,” said Arizona State quarterback Jayden Daniels, who threw for 104 yards and ran for 62. “He’s the best running back in the country to me.”

On a chilly night in the desert, the Sun Devils (7-5, 4-5 Pac-12) were plagued by miscues during a slow first half, managing just six points.

Once the second half started, Arizona State imposed its will on the Wildcats up front. The Sun Devils ran the ball 20 of 21 plays on a pair of third-quarter scoring drives capped by Benjamin TD runs, turning a one-point halftime deficit to a 21-7 lead.

“We were going to take all the guess work out of it and play big-boy football,” Arizona State offensive coordinator Rob Likens said.

The Wildcats (4-8, 2-7) were hurt by miscues, missed opportunities and an inability to stop Arizona State’s run game to end a second straight season with a loss to their biggest rival.

Arizona’s Khalil Tate returned as the starter for the first time three games and threw three interceptions — two on miscommunications with receivers and another on a drop. Tate threw for 228 yards and threw two TDs to Jemarye Joiner, who had seven catches for 140 yards.

“Is it frustrating? Yes. I know the fans are frustrated,” Sumlin said. “but we’ve got to trust the process and we have a process I believe in and a lot of players believe in.”

Arizona State won last year’s Territorial Cup game in an epic comeback, rallying from a 19-point deficit to beat Arizona 41-40. The win clinched the Sun Devils’ bowl eligibility in their first season under coach Herm Edwards and denied the Wildcats a postseason bid in their first under Kevin Sumlin.

This year’s game, the 93rd in the series, had no postseason implications but plenty of vitriol, starting with Arizona’s players using their cleats to scuff up the Sun Devils logo at midfield.

After early struggles by both teams, Arizona finally found an offensive rhythm midway through the second quarter when Tate found Joiner on a 48-yard TD after a busted coverage by the Sun Devils.

Once the second half started, the Sun Devils started pounding the ball down the field. The Sun Devils ran 11 straight times for 75 yards on their opening drive, capped by Benjamin’s 6-yard run to give Arizona State the lead.

Arizona State got its third interception in the third quarter when a pass by Tate went through the hands of running back Bam Smith. Benjamin capped another run-heavy drive with a 1-yard TD run and the 2-point conversion put the Sun Devils up 21-7, on their way to the first three-game winning streak in the series since 2005-07.

“Everybody wants to win in everything they do,” Tate said after his final game at Arizona. “You get in your car, you want to make the green light. When you do lose, you can use it as a lesson or let it affect you.”

Arizona’s defense, one of the nation’s worst, was good in the first half. Once the Sun Devils started running in the second half, the Wildcats had no answer.

A bowl berth already locked up, Arizona State put a nice punctuation on the regular season with a win over its rival.

Benjamin was a preseason All-American this year after finishing fifth nationally with 1,642 yards rushing. The yards were much harder to come this season, but he still managed to accomplish a rare feat his senior year.

Arizona’s season is over.