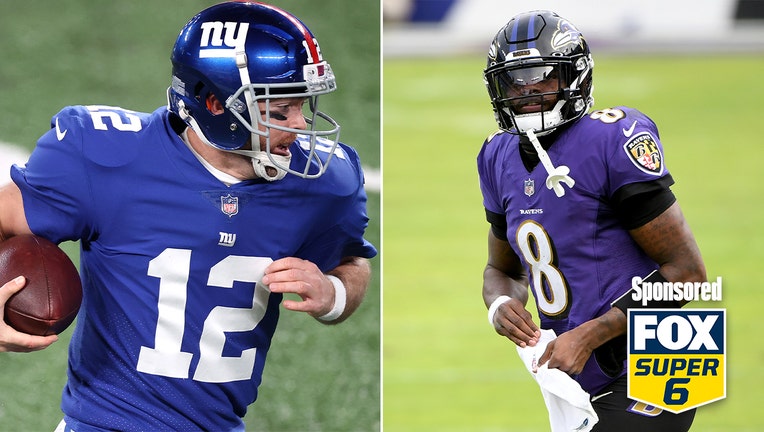 LEFT: Colt McCoy #12 of the New York Giants scrambles with the ball during the second quarter of a game against the Cleveland Browns at MetLife Stadium on December 20, 2020 in East Rutherford, New Jersey. (Photo by Al Bello/Getty Images) RIGHT: Quart

The playoff races have hit the crucial point of no return. And by the time the final weekend of football in 2020 is complete, the picture should have come into focus.

In the meantime, you could add some cash for the New Year with FoxBet’s Super 6 jackpot for Week 16 of the NFL season

This week, you could win the $100,000 jackpot if you could match the winners of all six games and the correct margins in the Super 6 contest. (The jackpot will be split among all those who get every game and margin of victory correct.)

The best part of all is it’s free. To play, all you have to do is go to the Fox Super 6 app on your phone or tablet device. When you click on the app, you will see the entry for the NFL Sunday Challenge. Just go onto the app, swipe for the team that you think will win and the margin of victory.

Here’s the six games to pick for this coming week.

The Chiefs can lock up home field advantage and the only bye in the AFC playoffs with a win over the Falcons, who have come back to earth after a mini-floruish under interim head coach Raheem Morris. Kansas City held on last week for a 32-29 win over the Saints in New Orleans. Patrick Mahomes threw for 254 yards and three touchdowns while Kansas City grinded out 411 yards of total offense against one of the NFL’s best defenses. Since Nov. 18, 2019, the Chiefs are now 22-1 overall if you count their three playoff wins on their way to a Super Bowl LIV championship. The Falcons blew a 17 point lead last week in a 31-27 loss to Tampa Bay.  Matt Ryan threw for 356 yards and three touchdowns. But it wasn’t enough- a familiar story in Atlanta the last four years.

Just when you thought you had things figured out with these two teams, the Bengals throw a wrench into the AFC playoff picture with their 27-17 upset on Monday night of the fading Steelers for their first win since Nov. 1. Strangely, the Bengals now have upset wins over the Titans and Steelers- two teams that would win their divisions right now. Giovani Bernard scored two touchdowns and rushed for 83 yards while the Cincinnati defense forced three Steelers turnovers. Houston played tough against the Colts last week before falling 27-20. DeShawn Watson could finish with outstanding numbers- he’s thrown for 4,134 yards and 27 touchdowns- in an otherwise forgetful season.

Who wins this matchup? With Fox Super 6, you could pick the winner of six NFL games and take a crack at big cash prizes. Download the app today.

There’s a scenario that could see the Football Team win the NFC East on Sunday afternoon. (They would need the Eagles and Giants to lose.) One complicating factor in this could be the status of Dwayne Haskins, who could be forced to sit after being spotted without a mask on in a topless nightclub on Monday night. The quarterback has apologized, but the NFL could issue discipline for violating COVID-19 protocols. Alex Smith could be back at quarterback anyway for Washington. This is the first meeting between Washington coach Ron Rivera and his former team, who he lead to Super Bowl 50 back in 2015-16. The Panthers may be without Christian McCaffrey again on Sunday due a quad injury.

With Fox Super 6, you can bet and take a shot at great prizes. If you win all six games, you can win $100,000. Download the app at the App Store or Google Play.

That sound you hear is the Steelers in free fall. Three weeks after being the team everyone wondered aloud if they could finish perfect, Pittsburgh has lost games to Washington at home, Buffalo and 2-10-1 Cincinnati on Monday night. Ben Roethlisburger looked every bit of 38 years old on Monday as the Steelers offense stalled in the first half and didn’t recover in time. The possibility exists for Pittsburgh to not just lose the AFC North, they could fall as low as six in the playoff standings should they lose to the Colts and Browns. Meanwhile, the Colts remained tied with the Titans after last week’s 27-20 win over Houston. (Tennessee has the tiebreaker on divisional record.) Phillip Rivers has found a chemistry with Zach Pascal, who had two touchdown catches including one with 1:47 left to win it.

It’s a big game for both teams and it could be a huge game for you on the Fox Super 6 app. If you pick that game and five others correctly, you could win $500,000. It’s free to play, so download today at the App Store or Google Play.

Early playoff game for both teams as the Giants are in a practical must-win to keep any hopes of keeping distance with Washington and forcing Week 17 to mean something while the Ravens are the best team on the outside looking in at the present moment. New York struggled to get anything going offensively with Colt McCoy in at quarterback for the injured Daniel Jones last week against the Browns. Meanwhile, Lamar Jackson was surgical last week during a 40-14 win over Jacksonville, completing 17 of 22 passes for 243 yards, three touchdowns and an interception. The Ravens have won three straight and are kicking things at a higher level than anyone else in the AFC playoff race in that span, with the possible exception of Buffalo.

The NFC West will effectively be decided on Sunday night. If Seattle wins, the Seahawks take the division title for the first time since 2016. A Rams win effectively makes Los Angeles the division leader with two head to head wins with one week to go and a game against the Cardinals next week. The Rams were stunned last week by the previously winless Jets 23-20 in SoFi Stadium. Los Angeles’ main problem has been offensive sluggishness- the Rams only posted 303 yards against the Jets last week. Russell Wilson has slowed down from his torrid MVP pace- passing for only 121 yards and a touchdown last week in a 20-15 win over Washington. Still, the Seahawks are much better defensively than what they were early in the season and that has been the difference that has them atop the West.

With Fox Super 6, you can pick the winner and take a shot at potentially $100,000 in prizes while playing for free. Download the Super 6 app on App Store or Google Play.

No purchase necessary. Open to legal residents of the US, excluding WA. 18 and older. See terms and conditions at foxsuper6.com. Sweepstakes and Prize Sponsored by TSG Interactive US Services Limited.