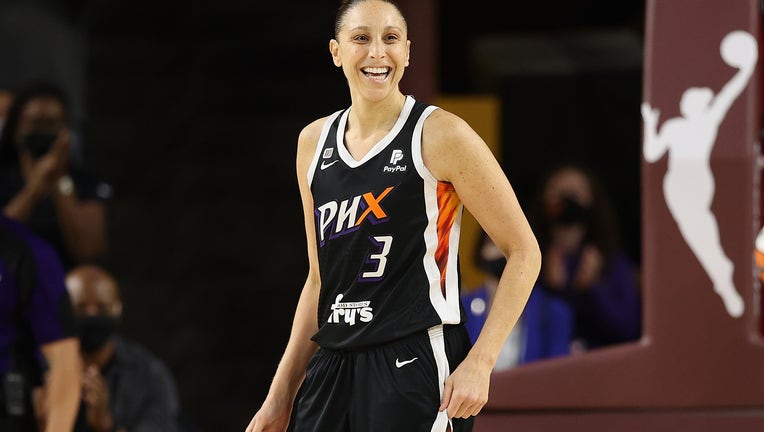 TEMPE, ARIZONA - OCTOBER 03: Diana Taurasi #3 of the Phoenix Mercury reacts during the second half of Game Three of the 2021 WNBA semifinals against the Las Vegas Aces at Desert Financial Arena on October 03, 2021 in Tempe, Arizona. The Mercury defea

TEMPE, Ariz. - The Phoenix Mercury have three of the best players in the WNBA, each one capable of taking over a game.

But this team goes deeper than Diana Taurasi, Brittney Griner and Skylar Diggins-Smith.

Brianna Turner proved it in Game 3 of the WNBA semifinals.

Turner had 23 points and 17 rebounds while Las Vegas focused on stopping Taurasi, leading the Mercury to an 87-60 win over the Aces on Oct. 3 and a 2-1 lead in the series.

"A lot of teams have been leaving her open and then it’s about her making plays," Mercury coach Sandy Brondello said. "We got her in some great positions near the basket. She’s just gaining confidence."

The Mercury got off to another fast start and never let up, winning a second straight rout as members of the NBA’s Phoenix Suns cheered from the front row of Arizona State’s Desert Financial Arena.

Turner was the catalyst at both ends, shooting 9 of 14 while frustrating Aces star A’Ja Wilson on defense.

Griner did her part, finishing with 18 points and 11 rebounds. Taurasi couldn’t get the shots to fall after a career playoff-high 37 points in Game 2, but had six assists and four rebounds.

Though Diggins-Smith also struggled shooting — 2 of 12 — she ran Phoenix’s offense to near perfection, finishing with nine assists and no turnovers.

The Mercury were just as good on the defensive end and dominated the glass, finishing with a WNBA playoff-record 58 rebounds — 29 more than Las Vegas.

Now Phoenix is within one win of reaching the WNBA Finals for the first time since winning the 2014 title. Game 4 is Wednesday in downtown Phoenix.

"These two games are the best we’ve played all season, at least consecutively," said Mercury guard Shey Peddy, who had 10 points and eight rebounds. "We were moving the ball well."

Las Vegas had a better defensive performance than it did in a blowout loss in Game 2.

The offense was disjointed.

The Aces struggled against Phoenix’s pressure and to get open shots to fall, shooting 31% and 2 of 14 from the 3-point arc. The Mercury also blocked six shots, including three by Griner.

"Offensively, we stunk," Aces coach Bill Laimbeer said. "They played very hard on defense — a good share of the credit goes that way — but we just didn’t have it offensive-wise today."

The Aces won the first game 96-90 at home, but Phoenix evened the series with a 117-91 win in Game 2, scoring the most points in a regulation playoff game in the WNBA’s 25-year history.

The series shifted across the desert to the Valley of the Sun, though not to the Mercury’s home arena. The Footprint Center had previously booked Disney on Ice, so the Mercury were forced to play their first home game of the WNBA semifinals at Arizona State.

Phoenix got off to a fast start in Game 2 — a record 68 first-half points — and kicked off Game 3 with 11 straight points. Taurasi got it started with two early 3s and Turner took it from there, scoring 17 first-half points.

Phoenix led 46-31 at halftime turned to Griner early in the second half. She delivered, scoring on a series of shots inside to extend the Mercury’s lead to 68-44 late in the third quarter — well on their way to another lopsided victory.

Wilson had a hard time shaking Turner in the first half and let out a scream after firing up an airball on a midrange jumper in the second. The 2020 league MVP later was hit with a technical foul arguing a foul call and finished with eight points on 2-of-14 shooting.

"It started with her free throws three games ago and I think it just wore on her a little bit," Laimbeer said. "She had a good second half today, found the bounce that we’ve been looking for. Some of the shots still didn’t go in, but at least the bounce and the confidence was there."

Game 4 is Wednesday at the Footprint Center in downtown Phoenix.