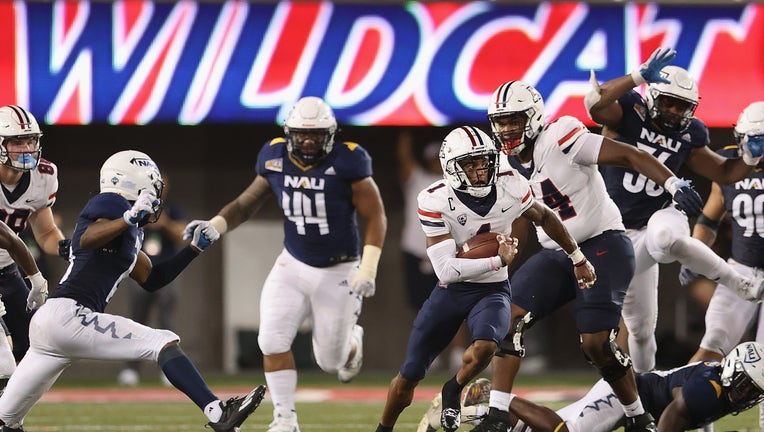 Wide receiver Stanley Berryhill III #1 of the Arizona Wildcats runs with the football against the Northern Arizona Lumberjacks during the second half of the NCCAF game at Arizona Stadium on September 18, 2021 in Tucson, Arizona. (Photo by Christian Petersen/Getty Images)

TUCSON, Ariz. (AP) — Northern Arizona freshman quarterback RJ Martinez took the final snap and dropped to a knee on the final play. Lumberjacks streamed across Arizona Stadium. One even did a backflip.

Inside the press box, NAU coaches screamed as they walked down the hall.

"We (expletive) run this state!" one shouted. "It’s personal!"

"This is one of those games that’s an opportunity to make a name for our program," Lumberjacks coach Chris Ball said. "It just shows our team, our staff, what we’re capable of doing."

The Lumberjacks (1-2) didn’t play like a winless FCS program, keeping it close at halftime, rising to life offensively in the second half.

Northern Arizona took the lead on Kevin Daniels’ 12-yard TD run in the third quarter, went up 21-13 on RJ Martinez’s 9-yard TD pass to Hendrix Johnson. Even after Arizona scored late, the Lumberjacks kept their composure, stuffing a 2-point conversion and fair catching a pooch kick to end a 14-game losing streak to Arizona that dated to 1932.

Missed opportunities sent Arizona (0-3) to one of the worst losses in program history.

Two first-half drives that started deep in NAU’s end resulted in field goals. Shoddy tackling allowed the Lumberjacks to convert a pair of long third downs on what turned out to be the winning drive.

The Wildcats still had life when Jordan McCloud replaced Will Plummer and led a drive that resulted in a 3-yard TD pass to Boobie Curry with 2:16 left. Their final shot fluttered to the ground in the end zone, when NAU’s pressure forced McCloud to throw a weak pass.

"It’s embarrassing," said Arizona’s Stanley Berryhill III, who had 11 catches for 94 yards. "You don’t want to lose to what you’d consider your little brother."

This was supposed to be Arizona’s best chance at ending a losing streak that stretched back to October 2019. Former NFL and college assistant Jedd Fisch was brought in to turn around the program and did all the right things off the field, generating a buzz in the desert.

Not much has changed on the field so far.

The Wildcats took away some positives after rallying late in a 24-16 loss to No. 23 BYU, but little went right in last week’s 38-14 loss to San Diego State.

Arizona was sharp defensively in the first half, forcing three turnovers while holding NAU to 87 total yards. The defense started to bend in the second, poor tackling allowing the Lumberjacks to pull into the lead.

The offense couldn’t get out of its own way.

Arizona’s offensive line struggled with the Lumberjacks’ quickness early and the Wildcats were held to a pair of field goals after starting deep in NAU’s end.

Plummer found Curry on a 49-yard TD pass, but also threw an interception that Brady Shough returned 28 yards for a touchdown just before halftime, pulling NAU within 13-7.

"That really changed the momentum of the game and really set off to our players that they can win the game," Ball said.

Even after falling behind after two second-half NAU touchdowns, Arizona had one last chance.

McCloud replaced Plummer — who finished 19-of-34 passing for 191 yards with two interceptions — for Arizona’s final offensive possession going 6 of 7 for 66 yards. He just couldn’t complete the biggest pass of the night, on the 2-point conversion.

Northern Arizona sputtered offensively most of the night, but moved the ball when it needed to and shut down Arizona to pick up one of the biggest wins in program history.

Arizona suffered one of its worst losses ever, plagued by poor tackling and an ineffective offense.

Arizona had two defensive backs ejected for targeting in the third quarter.

Mo Diallo was ejected on Northern Arizona’s opening drive for targeting Martinez. On the next, Jaxen Turner was ejected for a helmet-to-helmet hit on a catch by Coleman Owen.

Arizona opens Pac-12 play at No. 4 Oregon next Saturday.