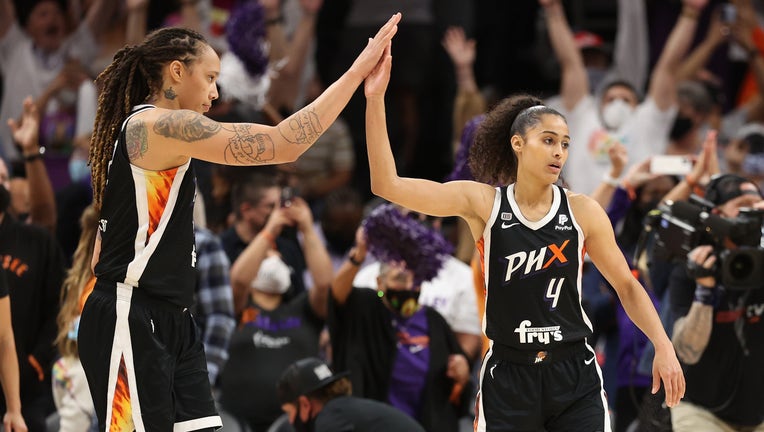 Brittney Griner #42 and Skylar Diggins-Smith #4 of the Phoenix Mercury celebrate after defeating the Chicago Sky in Game Two of the 2021 WNBA Finals at Footprint Center. (Photo by Christian Petersen/Getty Images)

PHOENIX (AP) - Diana Taurasi spent most of the night being hounded by Chicago’s Allie Quigley, an exhausting exercise in an already-tough game, particularly for a 39-year-old.

As Game 2 of the WNBA Finals wound toward a tight finish, the Phoenix Mercury looked to the player recently named the greatest in the WNBA’s 25-year history.

Anyone who knows anything about Taurasi knows what happened next.

Summoning the will that’s made her great for so long, Taurasi scored eight of her 20 points in overtime to help the Mercury evened the WNBA Finals at 1-all with a 91-86 win over the Sky on Wednesday night.

"That’s the GOAT right there," said Mercury center Brittney Griner, who dunked and had 29 points. "We know time is going down, it’s crunch time, we have all the faith in the world she’s going to make big shots for us."

Griner carried the Mercury early and brought the Phoenix Suns players sitting courtside to their feet with her second career playoff dunk in the first quarter. She scored on a turnaround jump to help give Phoenix a late four-point lead in regulation, but just missed blocking Courtney Vandersloot’s tying layup with 4.4 seconds left.

Overtime is Taurasi time and the league’s all-time leading scorer did what she does best.

Held to six points through three quarters, she opened overtime with a four-point play and added a 3-pointer that put Phoenix up 89-86 with 1:24 left. Taurasi then came up with a huge defensive play, getting a steal with 36 seconds left, and Skylar Diggins-Smith sealed it on a layup with 12.8 seconds left.

"When you’re in that moment, the gravity of what’s going on, you can feel it and you try to just laser in on each possession, each timeout, really communicating with each other," Taurasi said.

Chicago backed up its Game 1 win with another strong offensive performance, yet couldn’t finish it off. Vandersloot hit some big shots while scoring 20 points and finished with 14 assists. Allie Quigley added 19 points.

Game 3 is Friday in Chicago.

"We have a lot of weapons and when they take one away, we have to be confident and move it (the ball)," said Chicago’s Candace Parker, who had 13 points and nine rebounds. "We did that early, but we need a consistent 40 or 45 minutes of moving it."

Chicago overcame some early jitters and took advantage of the short-handed and fatigued to win Game 1 91-77. Parker was a calming influence while scoring 16 points and Kahleah Copper scored 21 points.