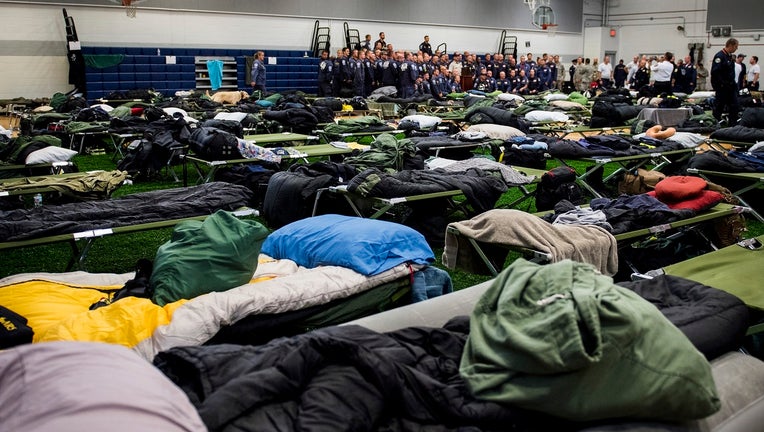 ATLANTA (AP) -- Thanks to reconnaissance by a neighbor who stayed behind, Pam Szymanksi knows Hurricane Irma blew out the living room window of her southwest Florida home, but she isn't sure when she'll get to see the damage for herself.

"All I know is we have to check out of here tomorrow, because they're booked," she said Monday, sitting in the lobby of a downtown Atlanta hotel where she arrived with her mother, two children and two dogs. A hotel reservation in Valdosta, Georgia, is next, Szymanksi said, but that's still 350 miles from their home in Fort Myers.

"I don't want to run into closed roads," she said, "but I want to get home and start cleaning up."

Szymanski's family helped make up one of the largest storm evacuation efforts in U.S. history, after Florida Gov. Rick Scott urged more than 6.5 million residents, one out of four of his constituents, to leave.

Scott cautioned evacuees not to rush back home.

"Storm impacts can continue well after the center passes," the governor said from his official Twitter account, asking residents to follow local officials' advice on when to return. He later retweeted FEMA's warning that Irma involves "disruptions to daily activities" long after it passes.

That's not necessarily a message Floridians want to hear, even as they contemplate reliving the day-long and overnight drives they endured just days ago.

Carin and David Atkins of Pinecrest, Florida, were waiting out Irma on Monday, planning to leave their Atlanta hotel Tuesday morning to head back down the Florida peninsula with their children, Molly and Thomas. The Atkins said they have hotel reservations near Cape Canaveral, more than halfway back to their home outside Miami.

"I've called to confirm they have power," David Atkins said, adding that some businesses near their home have power as well.

Carin Atkins said they can live without power at home for several days, recalling that they went 47 days without power after Hurricane Wilma in 2005. They evacuated, she said, only because of the threat of rising water from a storm surge that didn't reach to their home.

Other evacuees still aren't as sure of their return.

Troxell said her husband stayed behind and now is working with friends to remove a tree that fell on the roof of their house. They also had no power.

"We don't know when we're leaving and now there's another hurricane coming," Troxell said, referring to Jose, which was offshore. "I'm trying to sneak out when it's not 30 miles per hour-plus winds."

In Winston-Salem, North Carolina, Rea Argonza was worried about money as she mapped out her return plans.

"Staying here, it's been like a financial strain," said Argonza, who traveled with her husband and five children from St. Augustine, Florida, to two hotel rooms 500 miles away near the Wake Forest University campus. "We're up to almost a thousand dollars now. I do believe this whole expedition is going to be almost $3,000."

In some cramped quarters, there were parties.

Argonza celebrated her 32nd birthday in North Carolina. Troxell's daughter celebrated her 13th birthday Monday in Tennessee on a trip that's featured visits to the state fair, some nearby waterfalls and the Opryland complex.

But the joys of an unplanned excursion may not extend to 70-pound swine. Tank, the Troxell family pig, appeared homesick because he can't lounge by the pool like he does at home. "He's missing his tropical scenery," Troxell said.