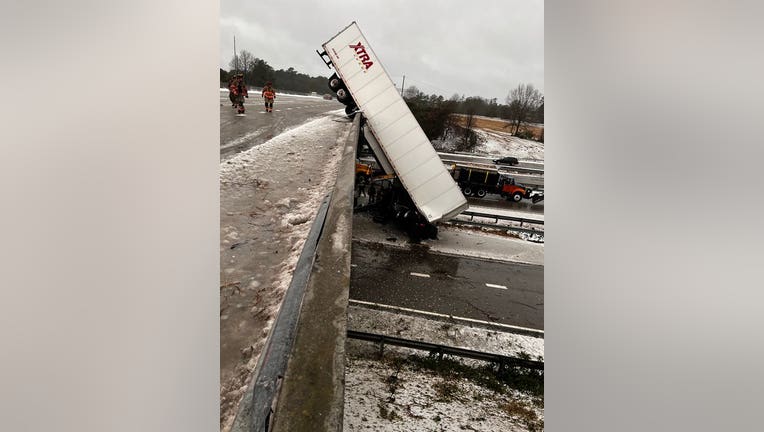 DURHAM, N.C. - A frightening moment in Durham, North Carolina, Sunday after a truck driver lost control while driving over an icy overpass, sending the tractor-trailer over the guardrail.

Police said it happened near the intersection of  U.S. Highway 15-501 and Highway 147. Authorities said nearby travel lanes will be closed for several hours.

The driver was taken to a local hospital for treatment, according to local reports.

A dangerous winter storm combining high winds and ice swept through parts of the U.S. Southeast on Sunday, knocking out power, felling trees and fences and coating roads with a treacherous, frigid glaze.

Tens of thousands of customers were without power in Georgia, North Carolina, South Carolina and Florida. Highway patrols were reporting hundreds of vehicle accidents, and a tornado ripped through a trailer park in Florida. More than 1,200 Sunday flights at Charlotte Douglas International were cancelled – more than 90% of the airport’s Sunday schedule, according to the flight tracking service flightaware.com.

Winter Storm Izzy dumped as much as 10 inches of snow in some areas of western North Carolina as the system moved across the southeastern U.S., said Brian Hurley, a meteorologist with the Weather Prediction Center in College Park, Maryland.

First Sgt. Christopher Knox, a spokesman for the North Carolina Highway Patrol, said that by midafternoon, the agency had responded to 300 car crashes and nearly 800 calls for service. Two people died Sunday when their car drove off the road and into trees in a median east of Raleigh. The driver and passenger, both 41-year-old South Carolina residents, were pronounced dead at the scene of the single-vehicle crash. Knox said investigators believe the car was driving too fast for the conditions, described as mixed winter precipitation.

More than 260,000 customers were without power by midafternoon Sunday, according to poweroutage.us. Especially hard hit was North Carolina, with 90,000 outages. The remaining outages were in Georgia, South Carolina and Florida.

A winter storm warning was in place for areas in northwest Georgia on Sunday, January 16, as the National Weather Service (NWS) warned of snow accumulations, strong wind and black ice in some parts. (Credit: Walker County, Georgia Government via Storyful)

Virginia State Police said traffic came to a standstill Sunday afternoon on Interstate 81 in Roanoke County after a tractor-trailer jackknifed and the cab of the truck disconnected from the trailer in the northbound lanes. Two additional accidents occurred in the traffic backup, one with minor injuries. The Virginia Department of Transportation said a detour was being set up. "Please stay off the roads if possible. Begging again! Hazardous conditions," read a tweet from VDOT’s Salem office.

From midnight to 12:45 p.m., Virginia state troopers responded to 142 traffic crashes and 162 disabled vehicles. No traffic fatalities were reported.

The West Virginia Department of Homeland Security tweeted photos of snow-covered roads in the southern part of the state and advised residents to "keep calm and hunker down." The agency says the storm is moving north and most areas of the state are expected to have accumulations of at least 4 inches (10 centimeters), with up to 12 inches (30 centimeters) possible in the mountains.

In Tennessee, there were multiple reports of abandoned and wrecked cars on snow-covered roads.

The storm system could cause hazardous driving conditions over a large portion of the eastern U.S. through Monday as the wet roadways refreeze in southern states and the storm turns and moves northward through the Mid-Atlantic states and New England.

While not a record-breaking storm in terms of snowfall, the large system could impact a dozen or more states.