A New Mexico man who was driving drunk without a valid license barreled through a parade that celebrates Native American culture in the western part of the state, injuring at least 15 people, officials said on Aug. 5.

The incident happened in the town of Gallup, which was the site of the 10-day Gallup Intertribal Ceremonial Centennial Celebration.

The vehicle sped through the city's downtown area about 15 minutes after the nighttime parade started. The parade is a highlight of the ceremonial celebration, which was founded in 1922 as a way for traders to showcase the culture and art of Native American tribes in the region, said Gallup Intertribal Indian Ceremonial Association board President Kyle Tom.

During the mayhem, the SUV swerved onto a side street and pulled into a parking spot before trying to pull out again. It hit a parked car and backed into a police car, state police said.

Many among the crowd of thousands lining the parade route in front of businesses that sell Native American jewelry, arts and crafts captured the chaotic scene on video. As the SUV sped near the parade, videos on social media showed people yelling for others to get out of the way and some pushing parade-goers to safety. One video showed parade-goers yelling obscenities at the SUV’s driver and passengers while they were handcuffed on the ground.

Children performing traditional dances appear to have been among the first to have seen the SUV heading toward them, the videos showed. They ran to the side amid screams and others scrambling to get out of the way. The images also showed blankets, shoes, banners and umbrellas left strewn along the street and on the sidewalks as people fled.

Officers converged on the vehicle and detained the driver and two passengers whom the driver identified as his brothers, according to court documents.

No one was killed. The people who were hurt, including the police officers, suffered mostly minor injuries, said New Mexico Gov. Michelle Lujan Grisham.

Tonya Jim said she went to the parade with her parents, grandchildren and children. Her 5-year-old granddaughter, KaRiah, was picked from the crowd to join a group of dancers. Shortly after, the vehicle barreled down the parade route, turned and hit a man across from them who was sitting on a folding chair, she said. KaRiah was helped off the road by someone and was not hurt.

Jim said the family burned cedar and prayed when they got home and did a tobacco smoke prayer Friday morning to calm down.

"I blessed my kids and thanked the creator they are still with me and (to) pray for the families who are hurt," said Jim, who is Navajo and lives in Fort Defiance.

Navajo Nation President Jonathan Nez and his family were among those almost hit as the Chevrolet Tahoe drove through the parade route. He recounted what happened.

"About halfway into the parade, we heard a lot of commotion ahead of us," said Nez. "Trying to make sure that everybody was getting off the street as quick as they can because that vehicle was coming pretty fast, and my family was on the opposite side of the street, and as the vehicle passed us, it was just feet, maybe even inches from where I was standing."

Nez said the vehicle was coming at him and a group of tribal officials marching in the parade. His wife, First Lady of the Navajo Nation Phefelia Nez, quickly grabbed their six-year-old son out of the street, just in the nick of time.

"Right when I looked back, I see just the front of the vehicle, but I couldn’t assess how fast it was approaching," Phefelia recounted. "All I knew was ‘get your son and get out of the way.’"

"I saw many people who were distraught," said Nez. "We are a very tight knit community, but like I said, we are going to overcome this together." 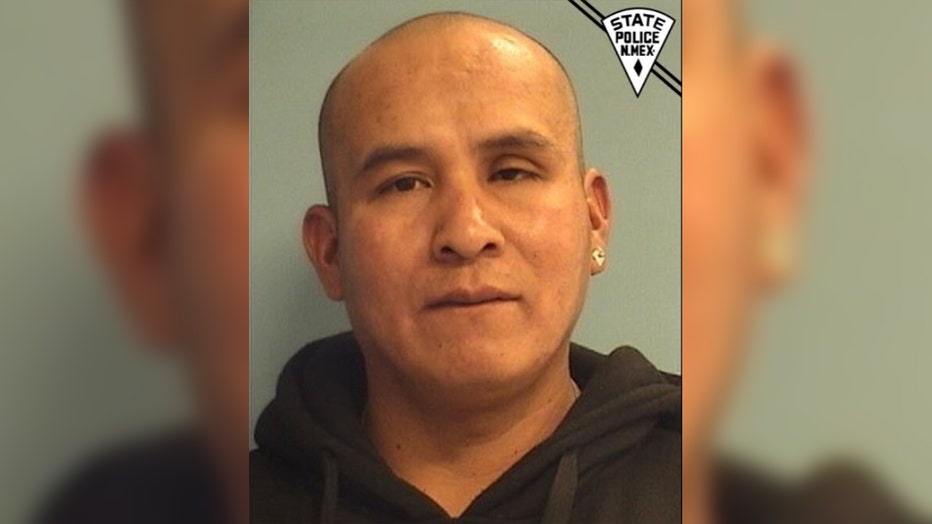 Jeff Irving, 33, was arrested late Thursday and faces charges that include aggravated driving while intoxicated, fleeing from officers and injuring parade-goers and two Gallup police officers who tried to stop the vehicle, court documents said.

In a statement, New Mexico State Police said that investigators have no reason to suspect the crime was motivated by hate.

Irving initially told police he was not drinking before admitting to having at least a couple of beers, according to court documents. His blood-alcohol content was three times the legal limit for driving.

Police officials said Irving's license had been revoked or suspended for another drunken driving charge and the SUV had no registration or insurance.

Court records didn’t list an attorney for Irving who could speak on his behalf. His two passengers were detained and taken to a detox center in Gallup, state police said in the statement. Irving is facing 21 charges.

Gov. Lujan Grisham said Friday that the state will send additional police officers and a behavioral heath crisis team to Gallup for the rest of the ceremonial event.

City, state and tribal officials met Friday, with some urging more resources to address alcohol abuse. The state has long had a driving while impaired rate above the U.S. national average, according to the Centers for Disease Control and Prevention.

"I think there’s always room for improvement," said Gallup police Capt. Erin Toadlena-Pablo. "I don’t think anyone should ever look at it and say we’re doing all we can. There’s always other means."

People travel to Gallup from the vast Navajo Nation that extends into Arizona, New Mexico and Utah and from other tribal reservations to attend the parades and events. Nez, tribal lawmakers and others expressed anger and disbelief over what happened.

"It’s supposed to be a celebration, but today it was a difficult time for us," Nez said.

A daytime parade will go on as planned on Aug. 13, the day before closing events, Tom said. Other events include dances, rodeos and a juried art show.