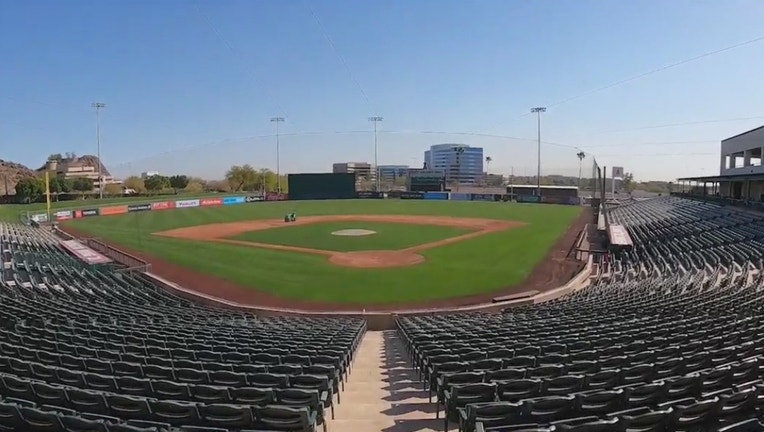 PHOENIX - Two Arizona residents are suing the cities of Phoenix and Scottsdale over the development of the San Francisco Giants’ year-round training facility in Papago Park.

Earlier this month, Phoenix and Scottsdale filed motions to dismiss the complaint and questioned Deal and Norgaard-Larsen’s legal standing and arguments.

City officials said they were optimistic their legal argument will win.

The facility is scheduled to open after renovations finish in March.

Deal and Norgaard-Larsen’s argument centers on a land deed issued in 1959 to Phoenix that states Papago Park should be used for "park, recreation, public convenience purposes, including the construction of a baseball stadium."

The pair argue that the Giants’ lease agreement violates the terms of the deed since the facility will be a private training complex rather than a stadium.

Papago Park is a 1,500-acre (6 square kilometer) park located between Tempe and Phoenix. Tempe residents voted in 2018 to designate the Tempe part of the park as a preserve. The remaining 1,200 acres (4.86 kilometers) of land owned by Phoenix is designated as a desert park and does not adhere to the same type of protections, which makes it easier for developers to build on it.

Phoenix leased nearly 37 acres (0.15 square kilometers) of the less-protected land to Scottsdale in 2018, and Scottsdale subsequently subleased the land to the MLB team for 25 years with an option to extend the sublease for another 10 years.

The Giants have conducted spring training at Scottsdale Stadium since 1986, but began renovating the Papago Sports Complex in early 2019.

The complex had been largely vacant since the Oakland Athletics moved its spring training facility to Mesa, Arizona, in 2014.

The Giants are scheduled to begin year-round training at the Papago Park facility in March, but will continue to play their spring training games at Scottsdale Stadium.