WASHINGTON - Reports of people watching ballot boxes in Arizona, sometimes armed or wearing ballistic vests, raise serious concerns about voter intimidation, the Justice Department said on Oct. 31 as it stepped into a lawsuit over the monitoring.

The statement from the Justice Department comes days after a federal judge refused to bar a group from monitoring the outdoor drop boxes in the suburbs of Phoenix.

Threats, intimidation and coercion are illegal under the federal Voting Rights Act, even if they don't succeed, the government’s attorneys wrote. While lawful poll watching can support transparency, "ballot security forces" present a significant risk of voter intimidation, the court documents state.

"While the First Amendment protects expressive conduct and peaceable assembly generally, it affords no protection for threats of harm directed at voters," U.S. government attorneys wrote.

The filing runs counter to a judge’s order Friday. U.S. District Court Judge Michael Liburdi found the allegations present "serious questions" but it wasn’t clear they were a "true threat" to specific people or groups and barring them could violate the watchers’ freedom of speech.

Liburdi is a Trump appointee and a member of the Federalist Society, a conservative legal organization. The Arizona Alliance for Retired Americans is appealing the order in the swing state with several closely contested races this year.

The group sued a group calling itself Clean Elections USA after reports that people were watching 24-hour ballot boxes in Maricopa County, including some who were masked and armed. A separate suit was filed in rural Yavapai County, where the League of Women Voters alleges voters have been intimidated by three groups, including one associated with the far-right anti-government group Oath Keepers.

The two cases were merged and the Justice Department filed a statement of interest Monday. Attorneys for Clean Elections USA did not immediately respond to a message seeking comment.

Complaints that people were watching the boxes, taking photos and videos, and following voters alarmed local and federal law enforcement. Sheriff’s deputies began providing security around two outdoor drop boxes in Maricopa County after a pair of people carrying guns and wearing bulletproof vests showed up at a box in the Phoenix suburb of Mesa. Another 24-hour outdoor drop box in downtown Phoenix is now surrounded by a chain link fence. 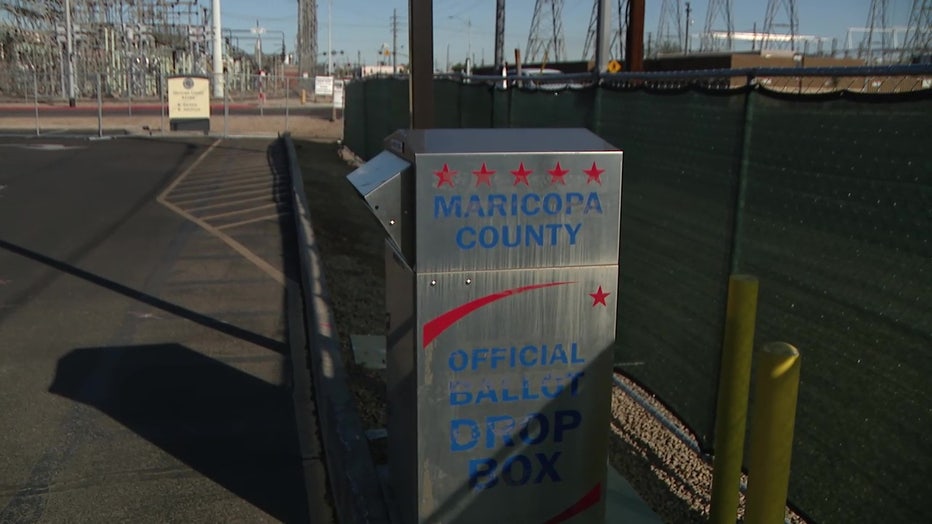 The law doesn’t specifically list which activities are prohibited near polling places, but video recording and photographing voters has been recognized as concerns for decades and was named in a 1994 Justice Department letter on potential violations of the Voting Rights Act, federal attorneys wrote.

As of last week, Arizona’s secretary of state said her office has referred six cases of potential voter intimidation to the state attorney general and the U.S. Department of Justice, as well as a threatening email sent to the state elections director. Arizona law states electioneers and monitors must remain 75 feet (23 meters) from a voting location.

Groups around the United States have embraced a film that has been discredited called "2000 Mules" that claimed people were paid to travel among drop boxes and stuff them with fraudulent ballots during the 2020 presidential vote.

There’s no evidence for the notion that a network of Democrat-associated ballot "mules" has conspired to collect and deliver ballots to drop boxes, either in the 2020 presidential vote or in the upcoming midterm elections.

A federal judge Friday refused to bar a group from monitoring outdoor ballot boxes in Arizona’s largest county where watchers have shown up armed and in ballistic vests, saying to do so could violate the monitors’ constitutional rights.

The sheriff in Phoenix said he’s stepped up security around ballot drop boxes after a series of incidents involving people keeping watch on the boxes and taking video of voters after they were apparently inspired by lies about the 2020 election.

Arizona Attorney General Mark Brnovich is asking anyone who encounters any intimidating incidents at ballot drop boxes to call police, and/or file a complaint with the attorney general's election integrity unit.