The alligator grabbed the handler's hand and pulled her into the tank before help arrived.

WEST VALLEY CITY, Utah - A guest at a Utah reptile center jumped into a large alligator enclosure to rescue a female handler pulled into a water tank by an alligator.

In a video captured by party guest Theresa Wiseman, a woman who is an alligator instructor at Scales and Tails, a self-described "educational and entertainment company," attempts to guide a large alligator back into a water tank after it made its way onto a platform.

The instructor signs a command, signaling for the alligator to retreat back into the water as a group of children attending the party look on from behind a glass barrier.

The husband of the woman who filmed the video, Donnie Wiseman, jumped into the tank to wrestle the handler’s hand away from the alligator's jaws with the assistance of Todd Christopher, another guest. 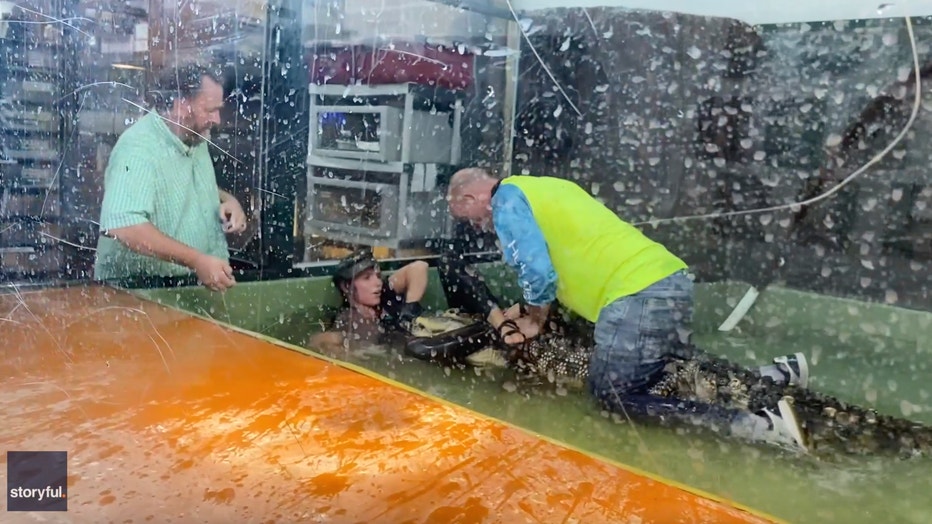 A guest at a Utah reptile center jumped into a large alligator enclosure to rescue a female handler. (Theresa Wiseman)

Wiseman hopped on the alligator’s back, attempting to subdue the animal as Christopher worked on opening the gator’s jaws to release the instructor’s hand.

Moments later, the gator released the handler’s hand from its grip as she jumped out of the water to safety. Wiseman remained on the alligator as the handler and Christopher shouted instructions on how to safely jump off the gator’s back. Both guests and the instructor returned safely behind the glass after the encounter.

Shane Richins, the company's owner, said in an interview Monday that the handler was opening the enclosure to feed the alligator as usual, but this time the reptile "got a little extra spunky."

He said the center normally has a strict policy for a second handler to be nearby when employees are working with the alligators. But that hasn't been enforced in recent years if the worker isn't planning to enter the enclosure, he said.

"We still enforce it strictly whenever somebody gets in with the gator but, of course, going forward, we will be back to strictly enforcing it with any interactions with the gator for that very reason," Richins said.

In a Facebook comment, Wiseman said, "To the staff at Scales and Tails thank you for having such skilled and brave people workin’ in that environment saved us both."

Scales and Tails said the handler was provided medical assistance by guest Amy Christopher, who had experience in nursing and started first aid prior to the arrival of emergency services, according to a statement released on Facebook.

Richins said the handler underwent surgery and is taking antibiotics. The West Valley City business said Sunday she is "doing well and is in recovery."

The company hailed the visitors who rushed to the handler's aid.

"These gentlemen could have stayed in the safety zone as most of us would, but instead jumped into the situation, of their own volition, and helped secure the alligator," the company said in a statement. "Their help, combined with the training of our staff member, probably saved her life and her limbs."

This story was reported from Los Angeles. The Associated Press contributed reporting for this story.