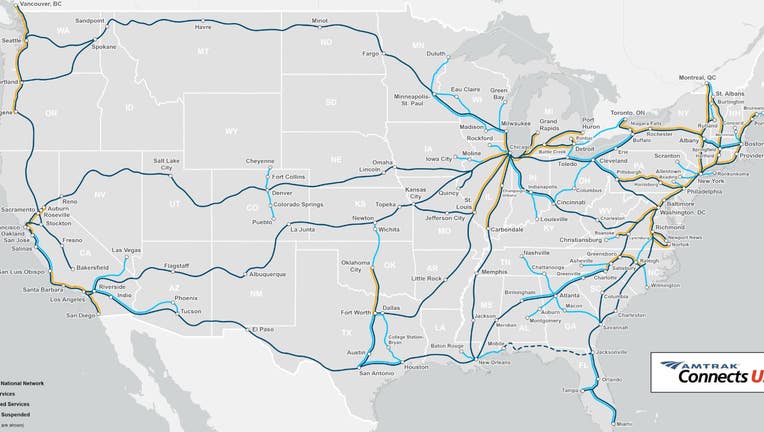 A map of the new routes outlined in Amtrak's 2035 expansion project. Officials plan to add service to cities like Las Vegas, Phoenix and Nashville. (Amtrak)

PHOENIX - Amtrak has proposed an expansion of their railroad network that could connect Phoenix with cities like Las Vegas and Indio, California by the year 2035.

"With a growing and diverse population, a global climate crisis and longer traffic jams, America needs a rail network that offers frequent, reliable, sustainable, and equitable train service," Amtrak said in a statement.

The railroad company ended service in Phoenix in 1996 following a derailment that killed an Amtrak employee and hurt more than 100 others.

The train was traveling from El Paso, Texas to Los Angeles when it crossed an "altered" track in Palo Verde, Arizona and careened into a ravine.

The FBI said the rail line was tampered with, and it was never fixed. Authorities are still offering a reward of up to $310,000 for information that could lead to an arrest.

Since 1996, the Amtrak station in Maricopa, about 27 miles (43 kilometers) south of Phoenix, has been the stop closet to Arizona’s most populous city.

Amtrak is hoping to bring service back to Phoenix - while adding 29 other potential new routes nationwide - by 2035.