On Tuesday evening, police released graphic bodycam footage of the incident which included 911 calls from witnesses and surveillance video.

NASHVILLE, Tenn. - A 22-year-old employee of a SmileDirectClub warehouse opened fire on Tuesday at the facility in Tennessee, injuring three people before being shot and killed by responding officers, authorities said.

The shooting was reported at about 6 a.m. at the manufacturing facility located in Antioch, Tennessee. Three employees were shot and transported to the hospital, whom police later identified as security guards Johnny Hardin, 46, and Carlton Watson, 66, and manager Thomas Abbott, 54.

Hardin was in critical condition, according to the Metro Nashville Police Department. Watson was listed in stable condition, and Abbott was treated and released from the hospital.

On Tuesday evening, police released graphic body cam footage of the incident which included 911 calls from witnesses and surveillance video.

The gunman, identified as an employee at the warehouse, was shot by police on the nearby roadway and later died at a hospital, Metro Nashville Police Department Spokesman Don Aaron told media outlets. Police body cams recorded the suspect being shot from multiple angles.

Surveillance footage released by police showed the suspect firing multiple shots at the building before reloading and firing again. He was later confronted by police after walking away from the warehouse, according to police.

Police said the 22-year-old male shooter, whose name was not released, started working at SmileDirectClub in June. He also worked at the company from late 2019 to early 2020. 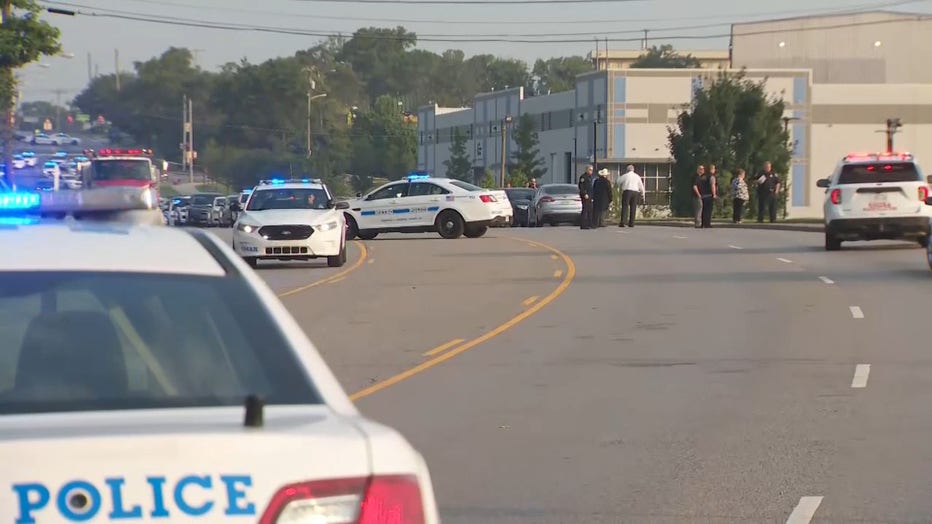 Police cars are pictured outside of the Smile Direct Club warehouse after a shooting was reported on Aug. 3, 2021, in Antioch, Tennessee. (Credit: WTVF)

"Obviously a very trying morning for the employees here to try and make sense of what happened, as well as our police officers," Aaron said, according to the news outlet. "When you see active shootings calls around the country, you always hope and pray that those will not happen here, but one happened here this morning."

The Tennessee Bureau of Investigation (TBI) said it is handling the officer-involved shooting investigation.

SmileDirectClub, a Nashville-based company that makes clear teeth aligners, said in a statement that it was "saddened" by the shooting and the safety of its employees is "a top priority."

"Although SmileDirectClub is saddened at the shooting that took place at its manufacturing facilities this morning, the incident was contained quickly by security personnel on-site," the statement reads. "The safety of our team members is a top priority for our Company and we maintain strict security protocols and a no-weapons policy at all of our facilities. We are working with the local police as they investigate this matter."

Antioch is located about 12 miles southeast of downtown Nashville.