Remains of 215 children found at Indigenous school in Canada

Video shows the tribute to the children at The Kamloops school in Canada. (Credit: Racelle Kooy)

An 18th century burial ground has been discovered at a former sugar plantation on the Dutch Caribbean island of St. Eustatius, officials said Monday, and archaeologists said it likely contains the remains of slaves and could provide a trove of information on the lives as enslaved people.

Government officials said 48 skeletons had been found at the site so far, most of them males, but also some females and infants.

Alexandre Hinton, the director of the St. Eustatius Center for Archaeological Research, said many more remains were expected to lie in the graves at the former Golden Rock Plantation.

RELATED: Remains of 215 children found at Indigenous school in Canada

"We are predicting that the number of individuals buried here will surpass the burial site discovered at Newton Plantation on Barbados, where 104 enslaved Africans were excavated. This is one of the largest sites of its kind ever discovered in the Caribbean," she said.

Authorities said the site was found while archeologists checked an area needed for expansion of an airport.

"We knew the potential for archaeological discoveries in this area was high, but this cemetery exceeds all expectations," Hinton said.

Given the location near the former plantation, Hinton said the graves most likely contain the remains of enslaved people.

"Initial analysis indicates that these are people of African descent," she said. "To date, we have found two individuals with dental modification that is a West African custom. Typically plantation owners did not allow enslaved persons to do this. These individuals are thus most likely first generation enslaved people who were shipped to St. Eustatius." 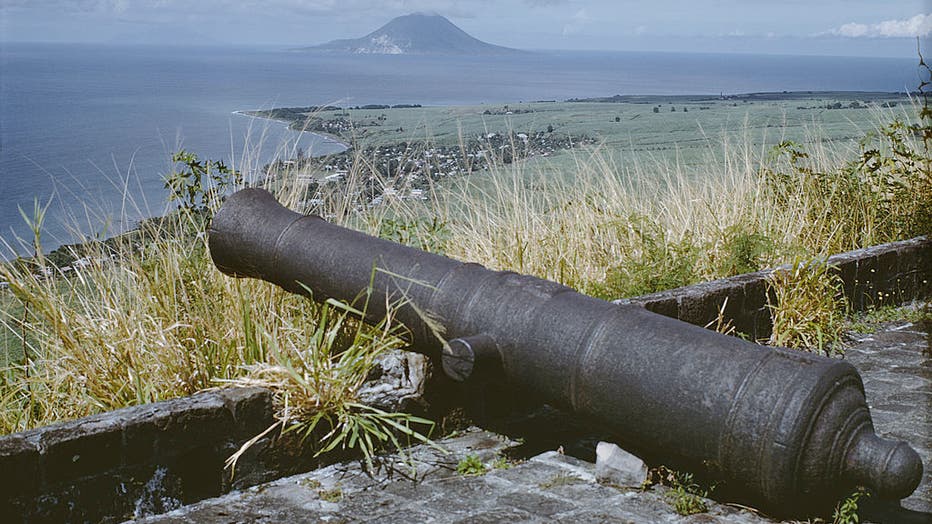 A cannon in the historical fortress on Brimstone Hill, St. Kitts, circa 1960. The island of Sint Eustatius is visible in the distance. (Photo by Archive Photos/Getty Images)

The majority of the burials contain remnants of coffins, coffin nails and objects that were buried with the deceased, such as several intact tobacco pipes, beads and ceramic plates. A coin from 1737 depicting King George II of England was found resting on a coffin lid.

Experts at several universities around the world will analyze the remains to learn more about the lives of the buried individuals.

Hinton said Leiden University in the Netherlands will conduct "stable isotope analysis" to determine the peoples’ diets as well as whether they were born on the island. Harvard will do DNA analysis to find where the people came from, and England's Northumbria University will do protein studies to discover what diseases they might have suffered.

One of the most important outcomes of the research will be a more thorough understanding of the lives of slaves in the Caribbean. Most of what is known about their lives comes from the writings of people in power, such as colonial administrators and plantation owners, sources that can be biased or incomplete.

St. Eustatius, which lies in northeastern part of the Caribbean, was colonized by the Dutch in 1636 and became an important transit port for the regional trade in sugar and slaves from West Africa.