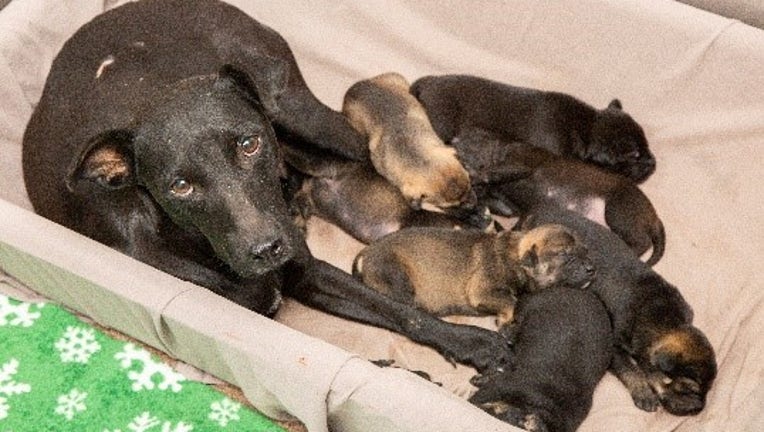 A dog and her seven puppies were rescued from underneath a home in Phoenix earlier this week. (Arizona Humane Society)

PHOENIX - A Labrador-pitbull mix and her seven puppies were rescued from underneath a Phoenix home by medical technicians from the Arizona Humane Society on Oct. 14, officials said on Friday.

The two-hour rescue began after the organization received reports of stray dogs who kept entering a hole that had been dug under a house, officials say.

Witnesses had said they believed a dog recently had puppies, but they were nowhere to be found. Technicians later found seven puppies - all less than two weeks old - in a pile underneath the home.

Officials say the emergency responders dug holes for two hours to extract the puppies, which were later taken to the Arizona Humane Society's trauma hospital along with their mother for medical treatment.

The mother had puncture wounds in her torso, and officials say she likely was injured by constantly going underneath the house to take care of her babies.

"Her demeanor is just as sweet with people as it is with her puppies and she is an excellent, attentive mother," the Arizona Humane Society said in a statement.

The dogs are now being taken care of by the organization, and it will be several weeks until they are ready for adoption.