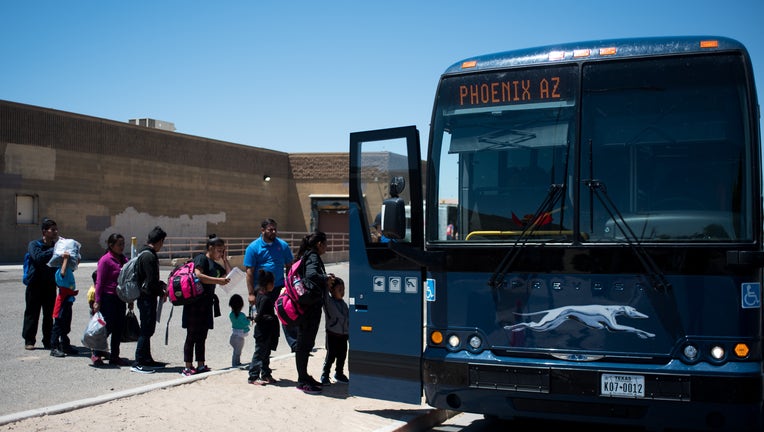 Buses idle in the noon sun waiting to take migrant families to reunite with their families in Yuma, United States on May 07, 2019. (Photo by Ash Ponders for The Washington Post via Getty Images)

PHOENIX - Arizona Republicans are calling for answers from the Biden administration amid a report that it has lost contact with one in three unaccompanied migrant children released to sponsors.

Amid a spike in unaccompanied children at the border, the Biden administration has been quickly moving them through Border Patrol into Health and Human Services (HHS) custody, which then released them to sponsors, normally parents or guardians, already in the country.

But according to data obtained by Axios, roughly one in three calls made to migrant children who had been released to their sponsors between January and May of this year went unanswered.

The percentage of calls that went unanswered jumped from 26% in January to 37% in May.

He warned that along with traveling with cartels and criminals, and being forced to make a dangerous journey, "many of these children are used by the cartels and smugglers to undermine our immigration system."

"Some are literally recycled back and forth across the border to exploit our laws and help facilitate access to our country for adults and contraband that should not be coming in," Brnovich wrote.

Brnovich requests an updated number on the number of children it is not able to locate, and what steps the administration is taking to increase calls and contact the child and sponsor.

"We must also track the welfare of every unaccompanied minor who is released from the federal government’s custody," he wrote. "Anything less is reckless negligence."

HHS has said that there may be a number of reasons why a sponsor may not answer a call, including being busy, not recognizing the number, or may not wish to speak with officials — emphasizing that it does not mean that a child is lost.

"While we make every effort to voluntarily check on children after we unite them with parents or sponsors and offer certain post-unification services, the oversight of the vast majority of kids is outside of our legal obligation," a spokesperson said. "Many parents or sponsors do not return phone calls or do not want to be reached by federal authorities."

Rep. Andy Biggs, R-Ariz., in a letter to Becerra called the HHS response to the report "troubling" and accused the agency of being "more focused on releasing UACs to sponsors as quickly as possible and closing the case file than ensuring that sponsors are complying with their agreements and that the children are safe."

"If sponsors are unable or unwilling to answer the phone when HHS calls, then HHS should not be approving them as sponsors in the first place."

He also pointed to a Bloomberg report that migrant teenagers have been released to labor traffickers and been sent to work in agricultural processing facilities.

"How can HHS know that the children are safe if it is unable to contact nearly one third of the sponsors it has approved?" he asks in the letter.

Biggs also requested a number of data points from HHS including how many migrants have been placed with sponsors, how many calls have been conducted, and how many sponsors have had their care agreements terminated.