Sen. Sinema has said that she will not vote to weaken the Senate's 60-vote filibuster threshold, and that has drawn criticism from other Democrats, as well as some voting rights advocates. Some have also mentioned the possibility of a primary challenger for Sinema. FOX 10's Matt Galka reports.

Phoenix - Arizona Senator Kyrsten Sinema is facing mounting criticism from those within her own party for her support for the filibuster.

Sinema, a Democrat, said on Jan. 13 that she will not vote to weaken the Senate's 60-vote filibuster threshold, bucking her party leaders yet again and dealing a major blow to Democrats' election reform effort.

"There's no need for me to restate my longstanding support for the 60-vote threshold to pass legislation. There's no need for me to restate its role in protecting our country from wild reversals of federal policy," Sinema said. "This week's harried discussions about Senate rules are but a poor substitute for what I believe could have and should have been a thoughtful public debate at any time over the past year."

She added: "But what is the legislative filibuster, other than a tool that requires new federal policy to be broadly supported by senators, representing the broader cross-section of Americans… Demands to eliminate this threshold from whichever party holds the fleeting majority amount to a group of people separated on two sides of a canyon, shouting that solution to their colleagues."

(Related Video) Sen. Sinema will not support elimination of filibuster

Democrats have been advocating for lowering the 60-vote filibuster threshold to more easily pass their federal voting rights bill. Biden in a fiery speech on the voting bill on Tuesday expressed support for the first time for changing the filibuster.

Sinema and fellow moderate Sen. Joe Manchin, D-W.Va., have taken the brunt of frustration from progressives over Biden’s stalled agenda. 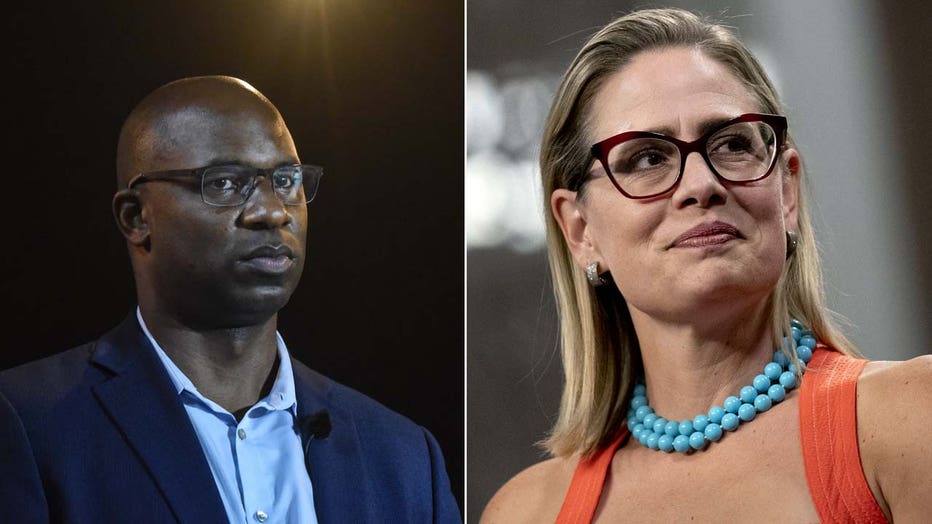 On Jan. 13, U.S. Rep. Jamaal Bowman shared his views in a Twitter message, in which he retweeted a photo that Sinema had posted of herself with Lewis, who died in July 2020 at age 80. She had captioned the post "My hero."

"Hero: a person who is admired or idealized for courage, outstanding achievements, or noble qualities. Traitor: a person who betrays a friend, country, principle, etc.," Bowman wrote.

"John Lewis is a hero, you [Sinema] are a traitor to his legacy, your constituents and our democracy."

Criticism of Sinema have not been limited to those in politics, as Martin Luther King III also had some harsh words for the senator, during his trip to Phoenix on Jan. 15.

King told a crowd campaigning to protect voting rights that Sinema cannot simultaneously express support for the legislation while also blocking their approval.

"History will remember Sen. Sinema, I believe unkindly, for her position on the filibuster," the civil rights leader’s eldest son said as the nation prepares to mark the birthday of the Rev. Martin Luther King Jr.

"Our daughter has less rights around voting than she had when she was born," King, the civil rights leader’s oldest son, said in an interview. "I can’t imagine what my mother and father would say about that. I’m sure they’re turning over and over in their graves about this."

The protesters were there over Sen. Sinema's support of the filibuster, as the Senate gets ready to take on a voting rights bill. FOX 10's Matt Galka reports.

On Jan. 18, about 20 activists and union workers protested outside Sen. Sinema's office in Phoenix.

Some protesters were hospitality workers who are unionized, and some of them, like Marilyn Wilbur, were on a hunger strike.

"I’m used to putting my body and my spirit on the line for democracy, and this is one thing I feel very strongly about," said Wilbur, who is an Air Force veteran. "Just because I’m retired doesn’t mean I stop protecting and doing what’s right."

Union workers also delivered a gigantic cake to the office, as a peace offering as well as a pressure tactic. The cake reads ‘Voting Rights Now.’

Primary challenge mentioned as possibility by some

Adrian Fontes, a Democrat who once served as the Maricopa County Recorder and is currently looking to be Arizona's next Secretary of State, was not shy about how he felt when it comes to Sinema.

"I think she’s being incredibly selfish, playing the middle, and playing politics ahead of the rights of all american voters," said Fontes.

State Rep. Reginald bolding, who is also seeking the Secretary of State nomination, says he is hopeful the voting rights legislation can still get passed.

"I am hopeful that Senator Sinema and also the 50 other United States Republican senators can step up to create a federal solution," said State Rep. Bolding.

State Sen. Martin Quezada, however, is pushing for someone to oppose Sinema when she is up for re-election in 2024.

"At this point, a primary opponent is really the best way to change things for Arizona," said State Sen. Quezada.

Sen. Sinema’s office said she was not available for an interview, but did refer to her floor speech, saying she made clear she supports voting rights.

There are multiple efforts to primary her, including one that already has pledges over $100,000.

Sinema, 45, has been a U.S. senator since January 2019 after previously serving in the U.S. House from Arizona's 9th Congressional District.

FOX News contributed to this report