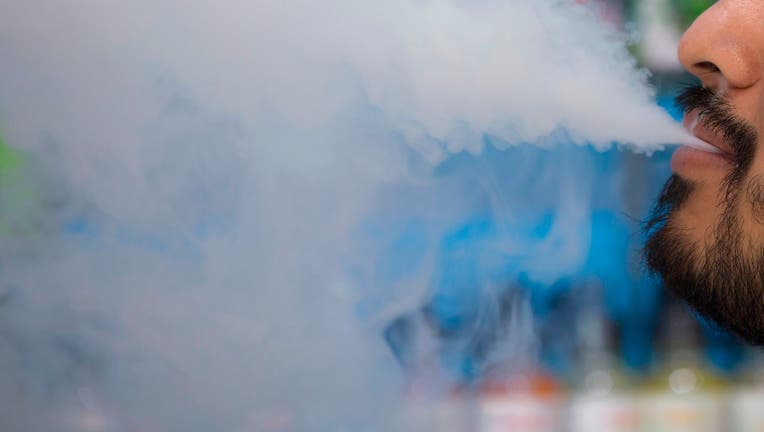 File: A man smokes an electronic cigarette inside a vape shop in Washington, DC. (ALASTAIR PIKE/AFP via Getty Images)

PHOENIX (AP) — Arizona’s attorney general has obtained a $22.5 million judgment against a New Jersey-based vaping company along with a court order permanently barring the company from selling its products in the state.

Attorney General Mark Brnovich announced the judgment against Eonsmoke on August 7. The company did not mount a defense to the consumer fraud lawsuit Brnovich filed earlier this year and a Maricopa County Superior Court judge issued what is known as a default judgment.

It isn’t clear if Arizona will be able to collect on the judgment. Eonsmoke’s website launches with a statement saying it has ceased operations “due to rapidly declining circumstances, coronavirus, regulatory, and competitor litigations.”

Eonsmoke has never responded to inquiries from The Associated Press seeking comment on Arizona’s lawsuit and did not do so Friday.

The U.S. Food and Drug warned Eonsmoke in an October 2019 letter that 96 of its flavored vaping products were illegal under federal law.

The lawsuit against Juul Labs continues and the company is defending itself against Brnovich in court. In its court filings, it denied targeting underage users with its marketing or advertising.

Juul said in January that it was focused on “working cooperatively with attorneys general, regulators, public health officials, and other stakeholders to combat underage use and convert adult smokers from combustible cigarettes.”

Juul has stopped all advertising and orders for flavored products.

The lawsuits say both companies targeted young people and contributed to an explosion of vaping use among teens. Several other states have filed similar lawsuits. The lawsuits seek the return of profits from both companies and a $10,000 fine per violation of the state Consumer Fraud Act.

“Eonsmoke is being held accountable for its unlawful conduct in Arizona, including marketing flavored vaping pods to children,” Brnovich said in a statement.

The ordinance was approved last December and bans vaping in public places in Mesa, where smoking is also banned.

Valley students will be on spring break in the coming weeks, and local nonprofit NotMYkid has a warning for parents, as kids are getting their hands on something new.

About 5,200 Arizona stores received a letter that outlines nearly 100 smoke products stores are no longer allowed to sell. It's all part of a lawsuit the attorney general filed at the start of the new year.