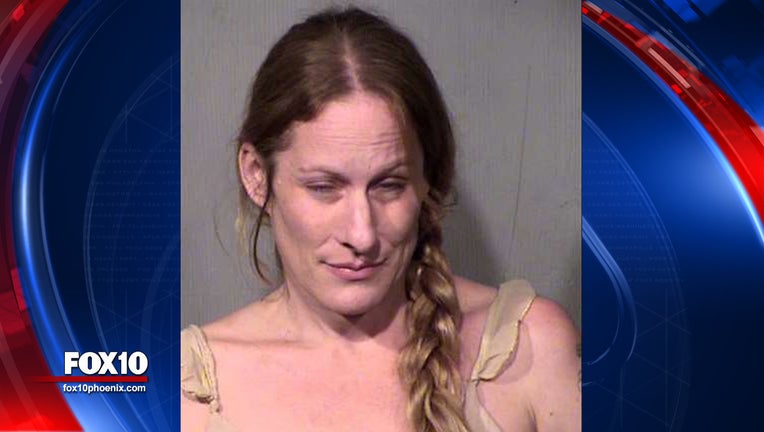 TEMPE, Ariz. (FOX 10) -- A woman claimed she "blacked out" the moment she hit the acceleration pedal, ran her boyfriend over and doesn't remember the ordeal, despite having visible damage to her vehicle, according to police.

On April 21, police say 40-year-old Vanessa Santillan committed aggravated assault by intentionally striking and running over her boyfriend with her car near University Drive and Wilson Street. The incident was observed by two witnesses in the area.

Police say after striking the victim with her vehicle, Santillan fled the scene. The boyfriend was left laying on the roadway. He suffered numerous abrasions to the right side of his body and was bleeding from his face to his legs.

The victim claims he and Santillan were arguing while traveling westbound on University Drive. When the stopped, he exited the car, walked in front of it, crossed eastbound traffic and walked to the sidewalk of Wilson Street.

According to court paperwork, the victim stated Santillan honked her horn and he "flipped her off." When he began to walk southbound, he heard the acceleration of a vehicle, looked over his right shoulder and saw Vanessa staring at him while driving towards him. She drove onto the eastbound sidewalk, struck him and fled.

In the police report, the victim says during a confrontational phone call, Santillan stated that she "blacked out" and did not remain at the scene because she didn't realize that it was "that bad." Later on, she picked up her son and drove him to North Arizona University.

On April 23, Santillan contacted the police by phone and admitted to being in a verbal argument with the victim and accelerating her vehicle from a stopped position towards him. She does not remember striking him with her vehicle but stated after the incident there was visible damage to it.

Santillan was booked into the Tempe city jail. A preliminary court hearing is scheduled for May 6.