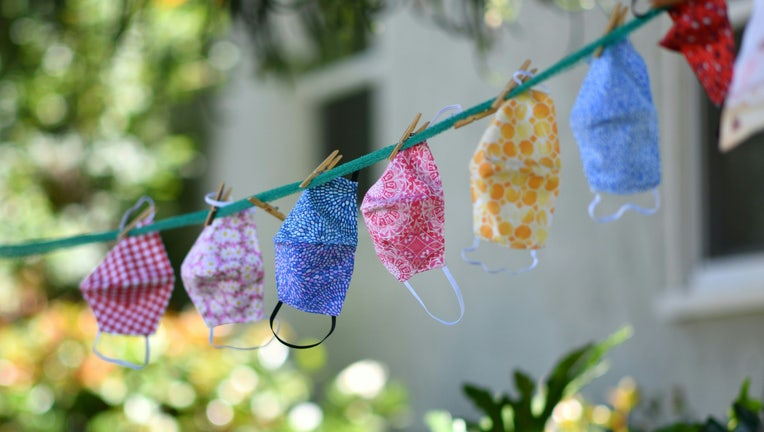 Face masks for sale are seen on a clothesline in the front yard of a home. (Photo by CHRIS DELMAS/AFP via Getty Images)

PHOENIX - With the coronavirus spreading out of control and Arizona cities beginning just last month to require residents wear masks in public, a few hundred people gathered in Scottsdale to make clear they didn’t approve of the heavy hand of government telling them to cover their faces.

A city councilman, Guy Phillips, came to the podium and ripped off his black face mask, declaring, "I can’t breathe!"

He later insisted his comment was meant to highlight the oppressive nature of masks, not to mock the dying words of George Floyd under the knee of a Minneapolis police officer, though Phillips' words were widely interpreted as racist.

A Scottsdale city councilman is at the center of a controversy, over words he said during a protest against Scottsdale's mask mandate.

The episode highlights the visceral opposition to government mandates, a fierce individualism that has endured among some in Arizona since the days of the Wild West. The buzz-off attitude is taking on new importance as the state has become one of the world’s top hot spots for the spread of the coronavirus.

The message that "my mask protects you, your mask protects me," isn’t always well-suited to the mind-your-own-business mentality of a state that produced Barry Goldwater’s small-government conservatism and John McCain’s self-styled "maverick" persona.

"Historically, Arizona has been something of a loner state, and many Arizonans seem to still like that image," wrote David Berman, a retired Arizona State University professor who has written extensively on the state’s history and political culture.

"It’s a very strong streak in Arizona. It has been for a long time — ‘We’re out here, we’re individuals, we don’t need the government, keep it small, let us do our thing,’" he elaborated in an interview. "Arizona has problems trying to quell these instances of individualism and fun-loving, ‘I’ll do it myself. Get out of my way.’"

Most people in Arizona are wearing masks, many without hesitation, especially in urban areas. But for those who refuse, or who only grudgingly do as they're told, there's a deep skepticism of government mandates. Many distrust the scientific consensus that the coronavirus is dangerous and that its spread can be mitigated with masks.

"One of our very first things we fought for in the Revolutionary War was the idea you can’t have a king over you making laws, we have a democratic process," said Sherry Wootan, 54, a Republican who declined to say where in Arizona she lives. "And that’s for a reason."

Wootan said she wears a mask only when required, and she doesn't cover her nose.

Arizona's government response was haphazard and slow, even as cases rose in June, which likely played an outsized role in the state becoming a hotbed for the disease. But some see Arizona's independent streak as a confounding factor, leaving a sizable chunk of the populace hostile to to the sacrifices recommended by public health experts. Without rigorous polling on the issue, it's hard to know how big the mask-skeptical group is.

Since its territorial days, Arizona has shown a tendency to prioritize the economy and the accumulation of wealth over other values, in large part to attract East Coast investors to the hot and distant desert, Berman said. Even before statehood, mining companies were given latitude to operate with minimal government oversight, sometimes with serious consequences.

In many ways, the state still proudly eschews pressure to conform to practices normalized in the rest of the country. It still doesn’t observe daylight saving time, and was the last state to adopt Martin Luther King Jr. Day as a state holiday, which lawmakers resisted until voters approved in 1992, only after losing the chance to host the Super Bowl over it. Its social welfare programs are bare-bones.

Since the outbreak began, Republican Gov. Doug Ducey has pledged to handle his response "the Arizona way" with a "lighter touch." Through most of June, with virus cases rising exponentially, he resisted pressure to slow the economic reopening or order people to wear masks in public. He eventually empowered mayors and county leaders to order masks. He routinely urges people to wear them, but he has declined to issue a statewide edict.

Ducey has allowed nearly all businesses, including restaurants, to keep operating. The restrictions in place now are less strict than those in place in the spring.

This month Arizona has reported among the highest case rates per capita of all U.S. states. Ninety percent of intensive-care hospital beds are in use, and the state has routinely set records for the number of hospital beds and ventilators being used by patients with COVID-19.

"We get email — a lot of emails — ‘You need to mandate masks, you need to close everything up.’ At the same time, you have to balance your economy," said Billie Orr, vice mayor of Prescott, a conservative town north of Phoenix that has not adopted a mask mandate. Orr and other city leaders are recommending masks, but say it makes no sense to impose a mandate that the small police force would have trouble uniformly enforcing.

Frank Hogan, a 44-year-old insurance and risk consultant in Phoenix, said he respects the right for business owners to mandate masks on their property, but he would not wear one if told to do so when visiting a government building. Hogan, a registered Republican, said he describes himself as a libertarian.

"For anything to be a law it has to be approved by the legislature," Hogan said. "It’s not an executive’s job — whether it’s a mayor or a county supervisor or a governor or a president — to make law. It is their job to enforce law."

Mask skeptics are vocal online, especially in Republican circles and anti-government groups. Many interviewed for this story declined to give their full names, but were angry about the idea of being forced to wear a mask or stay away from certain businesses. They used words such as "kings," "dictators" or "tyrants" to describe government leaders imposing the mask mandates.

Kelly Townsend, a conservative state lawmaker who is pushing for the Legislature to limit Ducey’s unilateral emergency powers, described Arizona’s culture: "I’m going to do my thing and I’ll leave you alone. You’re going to do your thing and leave me alone. And everyone’s happy."

When she arrived in Arizona, she said, it was a contrast to the follow-the-rules culture in her native Oregon.

"Regardless of what political spectrum we’re on, we want self-determination," Townsend said. "We don’t want to be maltreated. That’s not isolated to one party. All of us feel that way."

Others blame another culprit: Ducey.

"Yes, Arizonans are independent and tend to take their own path," said Terry Goddard, a former mayor of Phoenix and attorney general who ran unsuccessfully for governor as a Democrat twice. "But the issue here is more about leadership and confusion at the top than resistance to government overreach."

Health officials have repeatedly said wearing a face mask can help stop the spread of the coronavirus, but many people are refusing, citing freedom of choice. FOX's Ashley Strohmier reports.

Dr. Rebecca Sunenshine, the Maricopa County health director, addressed the media on July 8th on mask-wearing in the county and how it's doing when it comes to the spread of COVID-19.

"You think you're big and bad because you pull out a gun?" the sheriff’s office tweeted, sharing images of the exchange captured by surveillance cameras.

Summit Male Medical in Arizona is selling masks made of a material used in operating rooms that is said to kill viruses and other germs. FOX 10's Carmen Blackwell has the story.