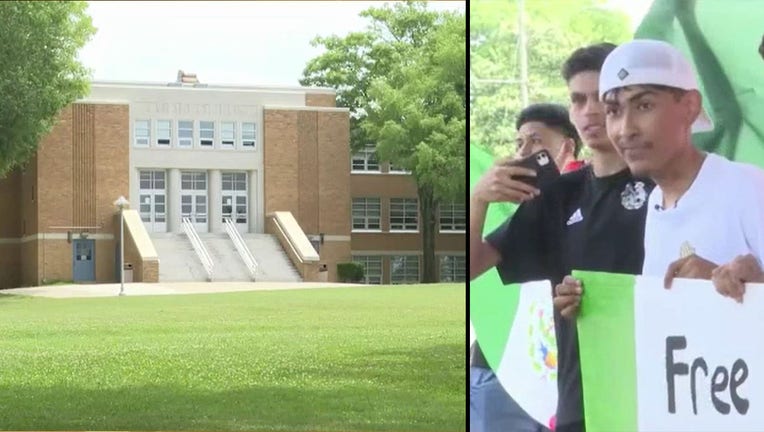 Police in North Carolina are investigating multiple threats at a school after a student was denied his diploma last week because he draped a Mexican flag over his gown during the graduation ceremony.

Ever Lopez told FOX8 that he’d been wearing the flag for most of Asheboro High School’s ceremony on June 4 and that several teachers saw him and didn't comment. Then when got up to receive his diploma holder, he said a faculty member stopped him and said he couldn't wear the flag.

Video of the graduation ceremony, which has since been removed from the school’s social media page, reportedly showed Lopez being handed a diploma holder and moving on to receive his diploma. It then showed him appearing to talk to people in the line for a few seconds before returning to his seat without his diploma.

School officials defended the decision, saying that wearing a flag of any kind is a violation of the dress code.

"Our graduation dress code is clearly shared with students ahead of time, and the wearing of a flag of any kind is a violation of the dress code," Asheboro City Schools said in a statement the next day.

School officials said they are working with the student and his family so that he will receive his diploma.

"He has worked very hard and we commend him on this great achievement. We are confident in his abilities and we know he has a bright future ahead of him," the school said.

The Asheboro Police Department confirmed to FOX Television Stations they are investigating 10 separate threats, one of which was an email from someone threatening gun violence.

"The author of the email stated, ‘I’m gonna shoot up this school if you don’t give that young man his diploma,’" police said.

Police are also investigating nine additional emails sent to school employees that also threatened violence against the school or the employee.

Police said they’ve stepped up patrols around the school.

RELATED: Teacher gives student his own shoes so he can walk in graduation

In a second statement released later on Friday, school officials said the incident has been "misrepresented" online.

"The heart of the issue is the fact that the student did not follow the established dress code for the event and detracted from the importance and the solemnity of the ceremony," the statement reads.

"Furthermore, the following information are the facts of what happened last night. The student attended and fully participated in the graduation ceremonies at AHS. This incident is not about the Mexican flag."

School officials said students were allowed to show their individuality and creativity only by decorating their mortarboards.

Meanwhile, FOX8 is reporting Lopez is set to receive his diploma Monday morning.

An official with Asheboro City Schools told FOX Television Stations Monday that the graduate's diploma has been made available for pick up since Friday, June 4.

"Our team has made multiple attempts over the weekend to arrange this with the family. Unfortunately, we've received no response."