This was the scene in Dunedin when an eagle swooped in for dinner. Video courtesy Amanda Rissman.

DUNEDIN, Fla. - With sunset on the horizon, Chad Rissman and his uncle Darrin Vick had waited all day for one bite.

"We are just sitting there talking. The line got tight and slack," Darrin recalled.

With that nibble, they reeled in an unforgettable fishing tale.

"I was reeling it in my uncle was going to grab the line," Chad said. 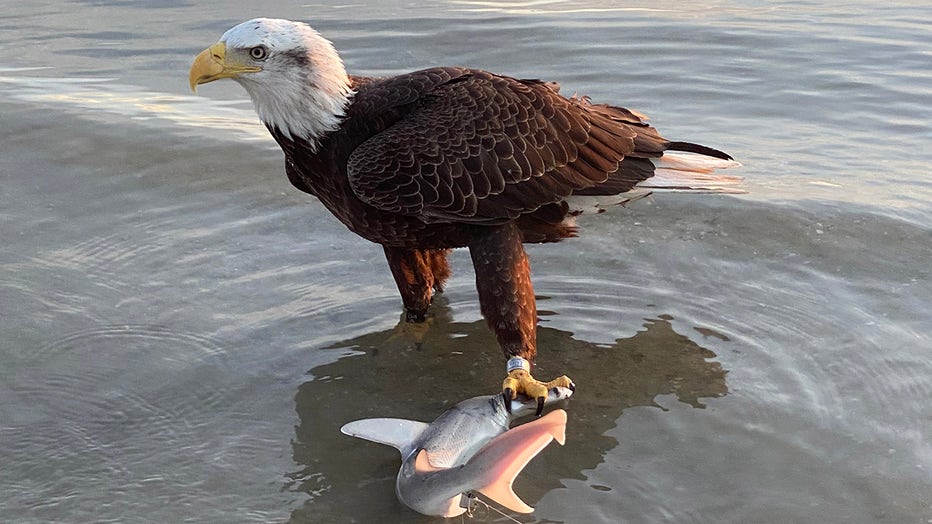 "As the leader is coming up, I said I’d get a hold of the shark," Darrin continued.

But before Darrin could, a bald eagle swept in and claimed the shark as its own.

"The way everything lined up, the sunset; I couldn’t have asked for a better time," said Chad.

The family grabbed their phones and captured the moment on the Dunedin Causeway.

"It's just like brushing the greatness of the country all into one picture and one experience," said Darrin.

They cut the line short and got the line and hook away from the eagle.

"I think they did a really great job. It could have been a lot worse," said Kim Begay with the Clearwater Audubon Society and Audubon Center for Birds of Prey. 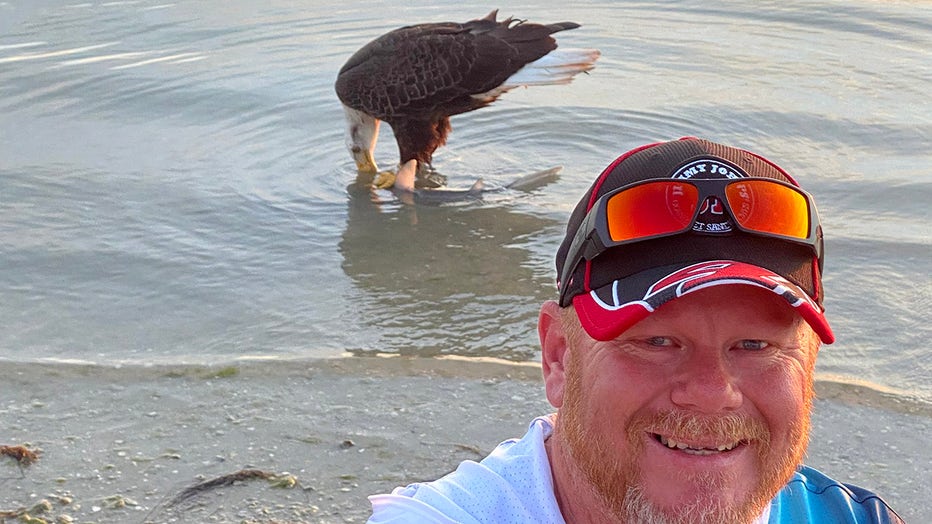 Begay knows that eagle as Eugene, first rescued in Bradenton in 2017, after fracturing her leg.

"The first time she broke her leg she was in rehab for about eight months and she was in rehab at a very critical time when she would be learning how to hunt and following her parents’ hunt," Begay explained.

Eugene appears to now be looking for easy meals.

"It's just like brushing the greatness of the country all into one picture and one experience."

If Eugene or any other bird is hooked, Begay said to follow these steps.

"If you hook a bird by accident, or the bird has line wrapped around them, don’t cut the line leaving the bird with long amounts of line trailing. You have to reel, remove, and release," she said.

If not, a bird could end up in serious trouble.

If you aren't comfortable getting the hook out on your own, Begay said to call the Raptor Center of Tampa Bay.

"The worst thing that could happen is for the eagle fly away with a hook inside of her and trailing line with 15 to 20 feet, because when she perches on things, she could end up hanging herself," Begay added.

For Eugene and Chad, it was a chance encounter for both.

"I used to identify as a Utah man, but now I'm definitely a Florida man," smiled Chad.