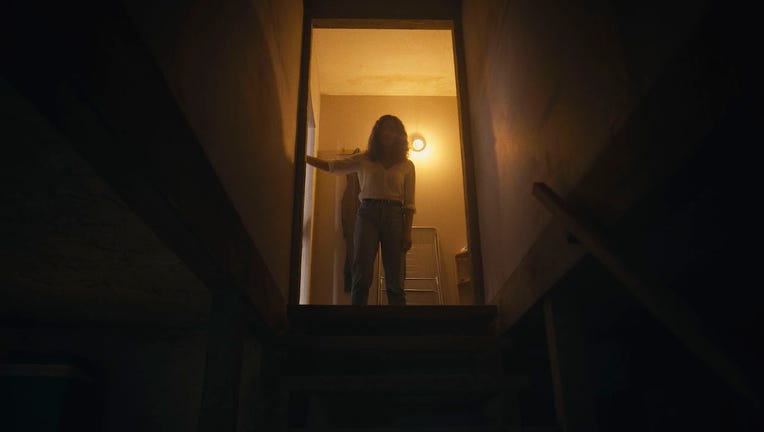 CHICAGO - A modern take on a classic horror premise, "Barbarian" poses a relatable question: What would you do if you arrived at your Airbnb, only to discover it’s been double-booked with a handsome stranger?

Though the set-up may seem simple, there’s far more to Zach Cregger’s "Barbarian" than meets the eye — just like the seemingly quaint Airbnb its protagonist finds herself unable to escape. With a sharp and distinct change in tone and structure at the 40-minute mark, "Barbarian" is an ambitious, original horror film; cleverly shot, sharply directed and featuring a trio of leads who more than pull their weight. Though its thematic intentions and twist plot developments may not all function in perfect harmony, there’s more than enough originality and black humor in "Barbarian" to make it one of the most intriguing horror movies in years.

About "Barbarian": Airbnb horror... with a twist

Starring Georgina Campbell and Bill Skarsgård, "Barbarian" follows Tess (Campbell), a young woman who books a seemingly idyllic Airbnb for the night ahead of a major job interview in Detroit. Upon arrival, however, Tess is dismayed to realize her temporary lodgings are in a not-so-safe part of town, and things go from bad to worse when she discovers a man named Keith (Skarsgård) is already staying at the Airbnb. The double-booked duo eventually resolve to stay the night in separate rooms, but when strange occurrences start to frighten Tess, her one-night stay quickly devolves into a waking nightmare of the "secret dingy hidden basement full of unspeakable horrors" variety. 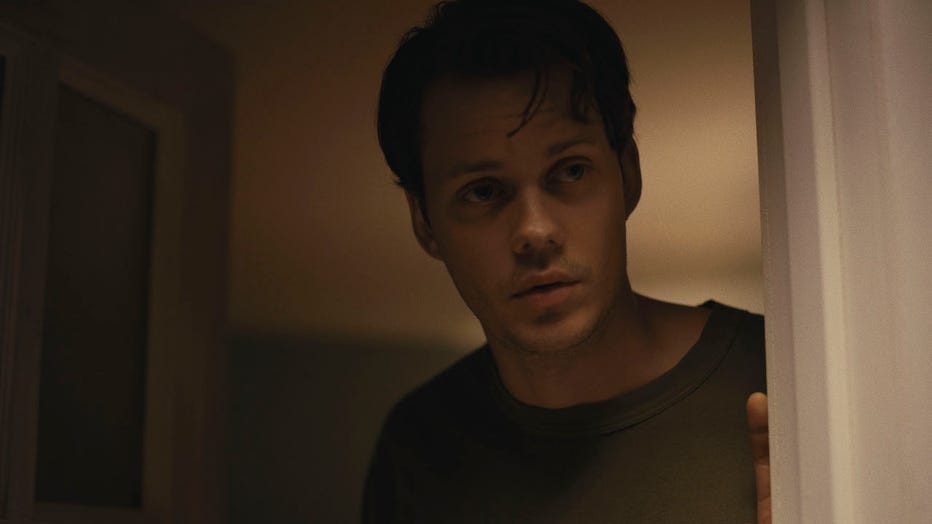 It’s difficult to discuss "Barbarian" without acknowledging that the film virtually reinvents itself at the end of its first act, with a story structure that bears remarkable similarity to the original "Psycho." The film the audience spends the first 40 minutes watching is hardly the same film so much as 10 minutes later. Yet it would be impossible to concretely describe the mechanics behind the sudden change in plot without diving into heavy spoilers — and this is, without question, a film you should see for the first time knowing as little about it as possible.

WATCH FREE ON TUBI: "Annabelle: Creation" — get the app

Suffice it to say, that ambitious first-act 180 is one of the biggest strengths of "Barbarian." Paradoxically, however, it’s also a bit of a frustrating weakness. While the total change in direction allows the film to truly grow into itself and embrace its aesthetic and narrative eccentricities, devoting more than a third of its runtime to tricking the audience into thinking they’re watching a different movie leaves only an hour for "Barbarian" to explore the true meat of its actual plot. 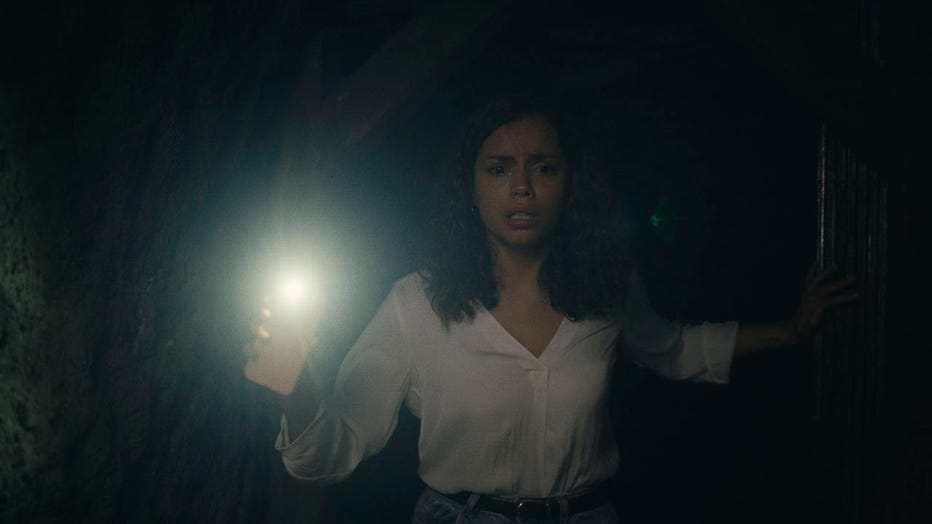 Thankfully, one of the film’s other big strengths is its heroine Tess — a practical, sharp-witted young woman whose quick thinking and adaptability put her squarely on the more capable end of the "final girl" scale. While "Barbarian" isn’t all that interested in exploring who Tess is as a character (the movie’s emotional heavy lifting comes elsewhere), what makes her such a refreshing protagonist is her reluctance to leave others behind. A bleeding heart can be a fickle thing in a horror movie, but Tess manages to be endearing and sympathetic without coming off as unintelligent or frustrating.

WATCH FREE ON TUBI: The psychological horror of "The Belko Experiment" — get the app

Equally engaging is Keith, the accidental housemate who toes the line between suspicious and simply overeager to make Tess comfortable. In a genre known for cardboard cutout characters who only exist to be killed, "Barbarian" takes great pains to endear Tess and Keith not only to the audience but to each other as well. Though they may start out on shaky terms, there’s enough genuine chemistry between the two that when things take a turn for the grizzly, we understand why Tess might put herself at risk to try and keep Keith safe.

While Campbell does her fair share towards creating a central duo you want to root for, the early and undeniable scene-stealer is Skarsgård as the enthusiastically hospitable Keith — stumbling over his words and bending over backwards to do anything he can to impress the beautiful young woman he’s resolved to share the Airbnb with. Without delving too much into where Keith ends up, he has a refreshingly genuine sense of goodwill that makes him a memorable main character in a sea of selfish or duplicitous "nice guys" in horror.

Rounding out the leads is Justin Long as AJ Gilbride, a douchey Hollywood big-shot who also finds his way towards the doomed Detroit Airbnb, but is introduced just after the film’s sharp turn around the 40-minute mark. Like Tess and Keith, AJ is another fully realized character whose personality feels very true-to-life (even as it leans much further into typical genre conventions and clichés), and he serves as the perfect foil for the main duo’s earnestness. Though AJ’s internal conflict may not be as cleanly executed as Tess and Keith’s, his character is a much-needed breath of fresh air whenever he appears, not to mention a surprising subversion of horror conventions when all is said and done. 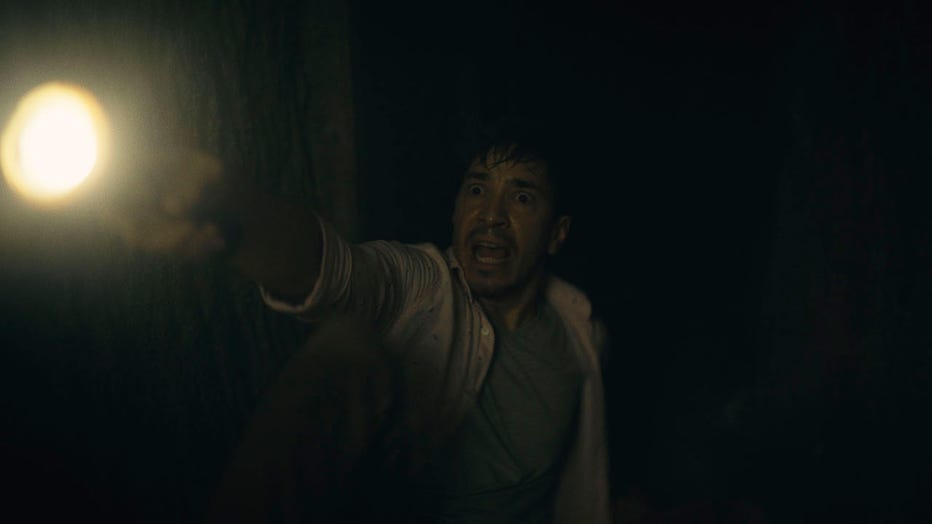 Shot dynamically by cinematographer Zach Kuperstein, "Barbarian" also has its fair share of visual flair to help emphasize the dramatic narrative shift the film builds itself around. Whether it’s sudden cuts to 50 years prior or dramatic pans and zooms to emphasize Tess’ paranoia, writer/director Zach Cregger takes full advantage of Kuperstein’s spirited sensibilities and infuses "Barbarian" with a liveliness that somehow complements both the initial slow burn and the last-act scramble for survival.

WATCH FREE ON TUBI: Justin Long in the horror flick "After Life" — get the app

Though "Barbarian" may not be paced quite well enough to properly balance its many ambitious themes and concepts, the film’s strong script, direction, cinematography and cast make for an all-around rip-ride of a horror film — a delightful subversion of expectations that challenges viewers without alienating them. Between Skarsgård’s scene-stealing rambling and Long’s gratingly familiar Hollywood dudebro, "Barbarian" is a zealous, clever little horror flick that far exceeds its conventional exterior trappings.

About the writer: Lauren Coates is a Chicago-based film critic and entertainment writer with a passion for queer and female-led media and an everlasting love for all things sci-fi. You can find her on twitter @laurenjcoates.

Make it a double feature with "Shivers," streaming free on Tubi

Shivers (1975): One of the first films from groundbreaking body horror auteur David Cronenberg, "Shivers" (also called "They Came From Within," among other titles) includes an unusually direct warning at the end of its trailer: "If this film doesn’t make you scream and squirm, you’d better see a psychiatrist — quick." And honestly, that’s not bad advice. A scientist in a fancy apartment kills a young woman and then himself, a terrifying occurrence that’s only the beginning of the nightmare "Shivers" conjures. It turns out the not-so-good doctor was experimenting with a lethal parasite, one that turns its host into a bloodthirsty, sexually crazed human wrecking ball. Rated R. 87 minutes. Dir: David Cronenberg. Featuring: Paul Hampton, Joe Silver, Lynn Lowry, Allan Kolman, Susan Petrie.

"Shivers" is streaming free on Tubi — get the app

How to watch "Barbarian"

"Barbarian" checks into theaters nationwide on Sept. 9. It is not currently available to stream.