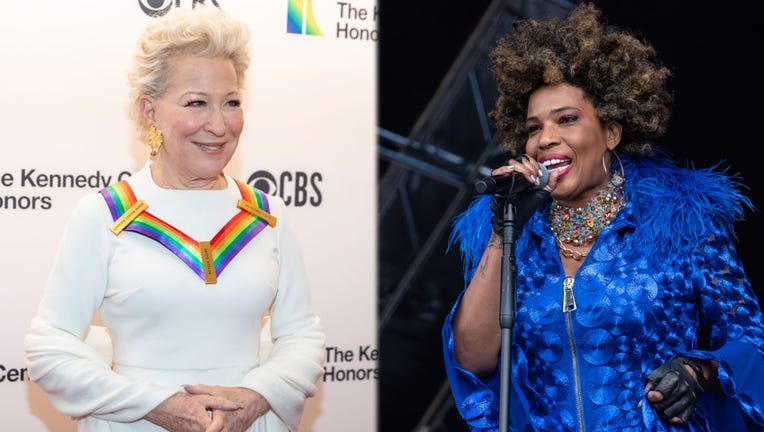 (L) Singer, songwriter, actress, and comedian Bette Midler walks the red carpet ahead of the 44th annual Kennedy Center Honors at the Kennedy Center in Washington, D.C. on Sunday, December 5, 2021. (Amanda Andrade-Rhoades/For The Washington Post via

Both Bette Midler and Macy Gray faced criticism on Monday for comments they made that some have deemed as transphobic.

Midler, 76, who has had many fans in the LGBTQ community throughout her decades-long career, shared a tweet that appeared to be in response to the U.S. Supreme Court’s recent decision to overturn Roe v. Wade, ending the federal right to an abortion.

"WOMEN OF THE WORLD! We are being stripped of our rights over our bodies, our lives and even of our name! They don’t call us ‘women’ anymore; they call us ‘birthing people’ or ‘menstruators,’ and even ‘people with vaginas,’" Midler wrote July 4 on Twitter. "Don’t let them erase you! Every human on earth [sic] owes you!"

Author Roxane Gay was among the commenters who criticized Midler’s tweet.

"No one is trying to erase women with inclusive language about people who need abortion care. No one is calling you anything but what you prefer," Roxane Gay wrote in a since-deleted tweet, according to FOX News. "You should extend that courtesy in return."

"No. Don’t fall for the anti-trans panic fake nonsense. No one is erasing women. In a few small healthcare cases where appropriate they are using trans inclusive language. That’s all," LGBTQ activist Dr. Panti Bliss-Cabrera replied.

"Bette. Don't be a TERF," another user responded, using the term defined as a feminist who excludes the rights of transgender women from their advocacy of women's rights. "Don't make us boycott ‘Hocus Pocus 2.'"

Midler is starring in the upcoming sequel "Hocus Pocus 2," alongside Sarah Jessica Parker and Kathy Najimy, to reprise their roles as the evil Sanderson sisters.

Gray, best known for her 1999 hit "I Try," also seemed to face some backlash for an appearance that aired Monday on Piers Morgan's show "Piers Morgan Uncensored" on FOX Nation. Gray, 54, shared her definition of a woman in response to Morgan noting how "we’re in an era now basically where most public figures are too terrified to say what they think a woman is."

"I know," Gray responded. "I would say a human being with boobs. You have to start there – and a vagina."

When the conversation turned to trans athletes in sports, Morgan first claimed he "supports all trans rights to fairness and equality," to which Gray replied, "me too." But Morgan noted that he is against athletes "born to obvious physical superior bodies, transitioning and then thrashing the women at their sport."

"I totally agree and I will say this and everybody's gonna hate me but as a woman, just because you go change your parts, doesn't make you a woman, sorry," Gray said.

"Right, you feel that?," Morgan responded.

"I know that for a fact," Gray replied. "But if you want me to call you a ‘her,’ I will, because that’s what you want. But that doesn’t make you a woman just because I called you a ‘her’ and just because you got a surgery."

"Being a little girl is a whole epic book, you know? And you can't have that just because you want to be a woman," Gray added later in the conversation.

"I don't think you should be called transphobic just because you don't agree," she continued. "There's a lot of judgment and throwing stones at people for just saying what it is."

"What is it about 'womanhood' that TERFs like macy gray and bette midler are so desperate to cling to?" writer Arielle Tschinkel tweeted. "Trans women existing doesn't make me any less of a woman, no matter how different our experiences may be. it's just ridiculous at its core honestly."

After the interview aired, Gray later defended her thoughts as well as support the LGBTQ community on Twitter.

"there is no bigger admirer of lgbt community than [yours] truly. it takes real balls to be honest about who you are. 'woman' is a title that you earn and become. just like 'man,'" she wrote in a tweet. "there are plenty of females who aren't women yet and every girl gets that."

In a statement to FOX News Digital, Gray added: "I have nothing but love for the LGBTQ+ and transgender community and have been a supporter since day one. My statement on Piers Morgan was grossly misunderstood. I don't hate anyone. I respect everyone's right to feel comfortable in their bodies and live their own truth"