CDC director says COVID-19 is becoming ‘pandemic of the unvaccinated’

During a White House briefing, CDC Director Dr. Rochelle Walensky said cases in the U.S. were up about 70% over the last week, hospital admissions were up 36% and deaths rose by 26%.

CINCINNATI - President Joe Biden on Wednesday urged Americans to get inoculated against COVID-19 as the U.S. vaccination rate slows while the spread of the delta variant has led to a surge in infections around the country.

Biden spoke during a televised town hall in Cincinnati, saying the pandemic has turned largely into a problem for those who are still refusing to get vaccinated.

"We have a pandemic for those who haven’t gotten the vaccination — it’s that basic, that simple," he said on the CNN town hall.

U.S. hospitalizations and deaths are nearly all among the unvaccinated. But COVID-19 cases nearly tripled in the U.S. over two weeks amid an onslaught of vaccine misinformation that is straining hospitals and exhausting doctors once again. 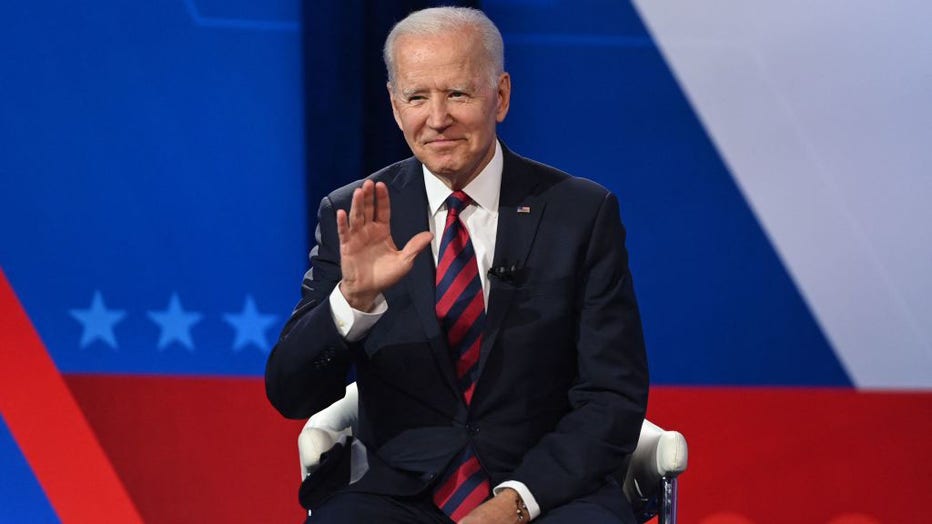 President Joe Biden waves as he participates in a CNN Town Hall hosted by Don Lemon at Mount St. Joseph University in Cincinnati, Ohio, on July 21, 2021. (Photo by SAUL LOEB/AFP via Getty Images)

Across the U.S., the seven-day rolling average for daily new cases rose over the past two weeks to more than 37,000 on Tuesday, up from less than 13,700 on July 6, according to data from Johns Hopkins University.

The delta variant, which was first detected earlier this year in India and has been identified in other countries worldwide, now accounts for an estimated 83% of COVID-19 cases in the U.S. The percentage is a dramatic increase from the week of July 3, when the highly transmissible variant accounted for about 50% of genetically sequenced coronavirus cases.

"In some parts of the country, the percentage is even higher — particularly in areas of low vaccination rates," Dr. Rochelle Walensky, director of the Centers for Disease Control and Prevention, said during a U.S. Senate hearing on Tuesday.

Walensky stressed that the CDC’s available data indicates that the COVID-19 vaccines currently being administered in the U.S. provide protection against severe disease, hospitalizations and death. The U.S. averaged 239 deaths per day last week, an increase of nearly 48% over the week prior, she said.

Meanwhile, just 56.3% of Americans nationwide have gotten at least one dose of the vaccine, according to the Centers for Disease Control and Prevention, while 48.8% of the population is fully vaccinated.

Alabama and Mississippi have only fully vaccinated 34% of residents.

Six months into his presidency, stemming the pandemic remains one of Biden’s most pressing issues. He expressed optimism that children under 12 will be approved for vaccination in the coming months but also displayed exasperation that so many eligible Americans are still reluctant to get a shot.

He added that students under 12 will likely need to wear masks when schools reopen in the fall as they wait to become eligible for the shot.

"The CDC is going to say that what we should do is, everyone under the age of 12 should probably be wearing a mask in school," Biden said. "That’s probably what’s going to happen."

Biden, who traveled to Ohio to garner support for his economic agenda, fielded a number of questions on many issues during the 80-minute event — including the makeup of the congressional commission that will investigate the Jan. 6 insurrection at the Capitol and his infrastructure package.

The trip came as the fate of his infrastructure proposal remains unclear after Senate Republicans rejected a $1 trillion blueprint in a key test vote Wednesday. A bipartisan group of 22 senators said in a joint statement after the vote that they were close to coming to terms on a deal and requested a delay until Monday.

Biden expressed confidence in the outcome, saying, "It’s a good thing and I think we’re going to get it done."

He also reflected on what it’s like to be president, saying he’s sometimes taken aback by the pomp that comes with the job and the weight of being "the last guy in the room" left to make the call on daunting decisions.