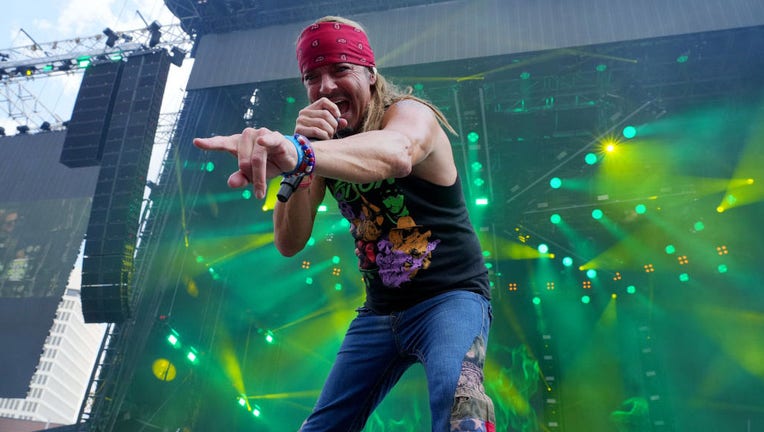 The band Poison was forced to cancel its Thursday night show in Nashville when frontman Bret Michaels was hospitalized just before he was set to take the stage, according to reports.

No official reason has been given for his hospitalization, but TMZ reported it may be connected to an adverse reaction to COVID-19 medication caused by his diabetes.

Band members reportedly came onstage to let concertgoers know that Michaels had suffered a "bad reaction to medication" and they would not be able to do the show without him.

The band has two more shows scheduled for this weekend – in Florida and Mississippi – which are now up in the air.

"Came all the way from KC to watch poison," one fan tweeted. "Bret Michaels was admitted to hospital. No poison in Nashville."

The band is currently on tour with Def Leppard, Mötley Crüe and Joan Jett and the Blackhearts. The tour started mid-June and is scheduled to wrap up in Las Vegas on Sept. 9.

Michaels, 59, was diagnosed with type 1 diabetes as a child and has had some health scares in the last few years.

In 2010, Michaels suffered a brain hemorrhage and was in intensive care for two weeks. He later said it felt like he had been shot in the back of the head.

"I knew I was slurring my words, and I was like ‘OK, this isn’t a headache. There’s something really bad happening,'" he told People magazine at the time.

"I'm so grateful. I celebrate the anniversary as being on the good side of the dirt and surviving," he again told the magazine 10 years after the health emergency. "I don't ever celebrate the brain hemorrhage."

In 2011, the singer also had surgery following a mini-stroke to repair a hole in his heart.

"I thank a higher power that I am alive today," he told People a year after that surgery. "It just wasn't my time to go. I know I'm still here for a reason. So, working with charities and helping others has become really important to me."

In 2014, Michaels underwent kidney surgery and was hospitalized six times in two weeks after the procedure, guitarist friend Peter Evick wrote on Facebook at the time.

"Bret continues to be steadfast in his dedication to bring the music to the people. He truly has to be held down to not perform," he said.

Evick wrote that Michaels had insisted on performing and would then have to be re-hospitalized after performances.

"Bret was again taken to a hospital and this time given medication that would keep him down," Evick wrote in 2014. "The doctors basically refused to release him. Causing us to postpone the charity event once again. Bret was truly devastated. It's actually honorable to me that he always brings up the concern for the fans first before addressing his condition."