Brooklyn Center man is fighting for his wife’s life after she gives birth on ventilator, battling COVID-19

Juan Duran’s wife, Aurora, has been on a ventilator at North Memorial Hospital since June 19. Since then, her baby was delivered via emergency C-section. Now Juan is fighting to get her a treatment she needs that could be the last resort to save her life.

Juan Duran’s wife, Aurora, was on a ventilator at North Memorial Hospital since June 19. Since then, her baby was delivered via emergency C-section.

“She’s one of the strongest persons I’ve ever known," said Juan at the time.

In the beginning of June, Duran says his wife, who was pregnant with their third child, started getting symptoms of coronavirus. He says she was coughing non-stop and after having trouble breathing, they decided to take her to the hospital. On June 19, she was put on a ventilator. 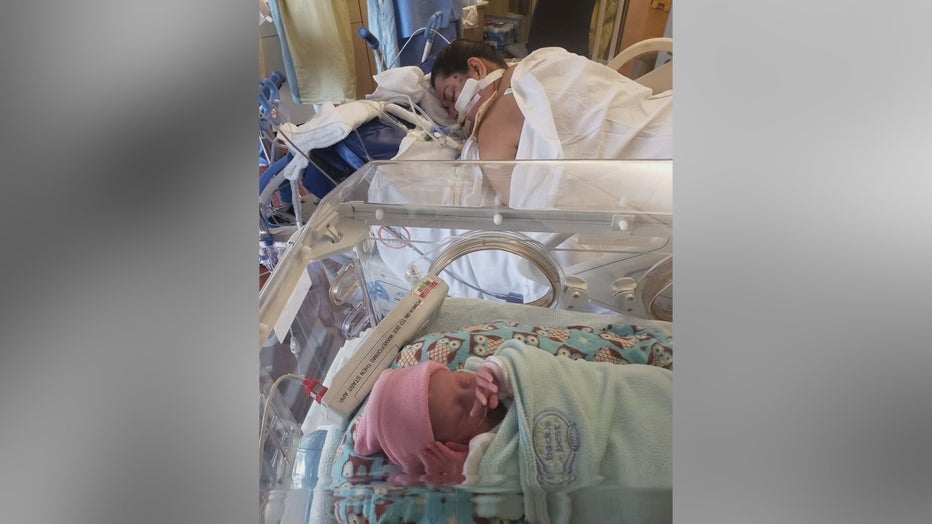 “She is a 35-year-old healthy woman with no pre-existing conditions,” Duran said. “We never thought this could happen to our family.”

A few days later, on June 23, Duran got a call from his wife’s doctors telling him she needed to have an emergency C-section to save her and the baby’s life.

“That’s when it hit me. I was thinking ‘okay she’s going to get through this, a few days at the hospital.’ But when I received that phone call it just hit me,” Duran said.

Aurora delivered a ten-weeks premature, but healthy, baby girl named Andrea. Even though she was on a ventilator during the surgery and still is, Duran says she is somewhat alert. He believes she can see and hear him and understands most of what’s happening.

Their baby, Andrea, is in the NICU but is continuing to grow and get stronger.

“She’s four pounds, two ounces now and her heart is doing great,” Duran said “She can breathe by herself. She eats, she smiles, she cries.”

As baby Andrea gets stronger, her mother’s condition worsened. Duran says the doctors tell him their only other option is to get her on an ECMO, or extracorporeal membrane oxygenation, machine which performs the functions of the heart and lungs from outside the body.

North Memorial Hospital says they are not able to offer the ECMO treatment to Aurora. In a statement to FOX 9 the hospital says:

“North Memorial Health partners with local and regional healthcare systems to care for patients who would benefit from ECMO, which is a highly specialized service that is typically only offered at ECMO Centers. We do not offer ECMO as a long-term or ongoing treatment which would be required to treat COVID-19, but we do use it for short-term emergency care as part of our trauma and cardiovascular surgery programs, when needed. ECMO Centers have stringent criteria for accepting patient referrals and our medical teams work closely with these partners to ensure that our patients have access to the care they need.”

Duran says doctors at North Memorial and his family have requested to move Aurora to a different hospital that can offer an ECMO machine treatment. All of those requests have been denied.

He says he hopes by sharing his story he can get his wife the treatment she needs to get healthy and get back to doing what she loves: being a mother to her newborn baby, 1-year-old son and seven-year-old daughter.

Duran also says he hopes by sharing his family’s story, others will realize the risks of coronavirus and take precautions to keep themselves and others healthy.

“Just be cautious because you could be healthy just like my wife and still end up in the ICU on the ventilator,” Duran said.