LOS ANGELES - If fireworks and barbecues aren't a part of your Fourth of July agenda, settle down with a patriotic movie marathon on Tubi.

As freedom rings outside, transport yourself to the Marvel universe with "Captain America" or spend a day in the Oval Office with former President George W. Bush in "W."

Whether you're in the mood for an action movie starring Nicolas Cage, a documentary about President George Washington, or an animated 4th of July beach party for the little ones, Tubi has you covered this Independence Day.

"An ex-Marine dons a star-spangled superhero suit to take down an industrialist out to destroy Phoenix with a homemade neutron bomb."

"A dramatic interpretation of the presidency of George W. Bush, who started life as a privileged party boy and rose to high office."

"A struggling visual artist’s plan to throw a 4th of July cookout while his dramatic roommate is away and goes up in smoke when a quick errand goes wrong."

"A slandered, expert CIA agent must stay ahead of contracted hitmen who want to steal a memory card she holds that could trigger World War III."

RELATED: Brush up on previous seasons of ‘The Masked Singer’ on Tubi

"A cool lion, a happy bee, and a baby giraffe join their best friends in the town of Sunnyville to celebrate and learn about America’s independence!"

"Two siblings in 1930s Connecticut who befriend a kind, brain-damaged WWI veteran ask their lawyer father to defend him when he is accused of murder."

"A renowned doctor living a quiet life in Montana is thrust into a race for time to find a cure for a deadly virus, released by a rogue militia leader."

"A documentary on America’s first President, George Washington, from ideas of self-government and the American Revolution to creating the Constitution." 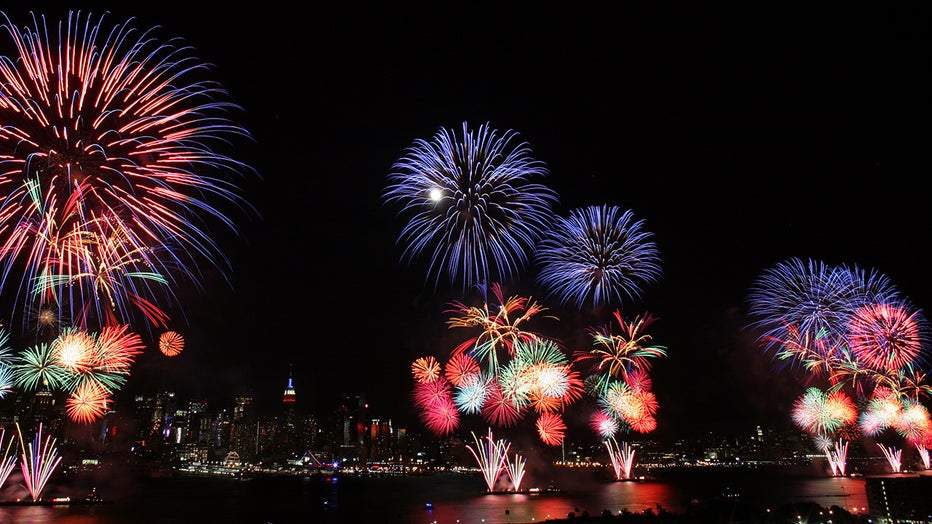 WEEHAWKEN, NJ. - JULY 4: The New York City skyline is seen in the distance as fireworks explode over the Hudson River during the Macy's fireworks display July 4, 2009 in Weehawken, New Jersey. It was the first time since 2000 that the Macy's display

"Fulfilling his father’s dying wish sets off a curse of epic proportions that a young professor must lift by nightfall or risk losing everything."

"Nicolas Cage stars in this true tale of WWII heroes who survived a brutal attack by a Japanese submarine only to face shark-infested waters."

"A 4th of July event from the ‘Nina’s World’ series as the Flores family hits the beach to celebrate Nina’s father’s first holiday as a U.S. citizen."

"When her parents get stranded out of town for the July 4 family reunion, Erica and her eccentric aunt and uncle are forced to step up and play host."

"A small-town stoner who writes comics about a superhero monkey suddenly discovers that he is a trained and deadly sleeper agent for the CIA."

"This documentary examines the irony of America’s Founding Fathers, who dreamed up a nation of individual liberty, while many of them owned slaves."

"A family is torn apart during the American Civil War as one of their own is considered a patriot to some, and a traitor to others."

"When Earth is attacked by hostile aliens, a firefighter and a rogue scientist team up to build the only weapon capable of defeating the attackers."

"Based on a true story, a notoriously violent mobster expands his considerable reach on the streets of Boston while also working directly with the FBI."

"A real-life CIA officer is driven to the brink and her real identity exposed after her husband disputes U.S. intelligence on nuclear programs in Iraq."

"Pressured by the franchise owner, the coach of a once-great, now losing football team struggles with a very personal choice between two quarterbacks."

"The ultimate New York comedian and former SNL player takes on America's history, including the Constitution and three branches of government."