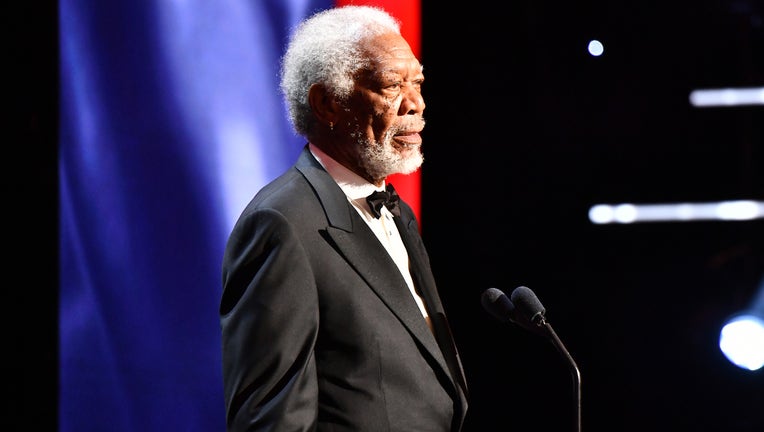 LOS ANGELES - Morgan Freeman first stood on a stage when he was 8 years old, playing Little Boy Blue in a pageant. That’s when he knew he wanted to be an actor.

More than seven decades later, Freeman’s career includes his Oscar-winning performance in "Million Dollar Baby." He was nominated for Oscars four other times, including for his work in "Shawshank Redemption" and "Driving Miss Daisy."

Freeman recalled a tough time in his career, in the early 1980s, during an award acceptance speech in 2018.

"I thought my 15 minutes were up ... I needed to get a job," he said. "By the time I got down to the moment when you make that decision — give it up — something happened. Paul Newman came along."

"I used to imagine myself being a chauffeur because there came a time I thought it was all over," Freeman said in a Facebook video taken from inside his car ride to the show. "I thought my career had reached its pinnacle, its peak."

It was seven years later that he did become a chauffeur of sorts — driver Hoke Colburn in "Driving Miss Daisy."

Freeman was born on June 1, 1937, in Memphis, Tennessee. He joined the Air Force after high school with hopes of becoming a fighter pilot. He then changed his mind and decided to pursue acting, leading to an exceptional body of work.

Here are some of his movies you can catch on Tubi:

Driving Miss Daisy (1989)- "Over the course of many years, a strong-willed southern white woman and her driver, who is African American, form a special friendship."

Just Getting Started (2017)- "An ex-F.B.I. agent and an ex-lawyer in the Witness Protection Program with a shared love interest must shelf their rivalry when the mob comes calling."

Life of Riley (2014)- "Narrated by Morgan Freeman, this visually stunning film has contributions by Bono, Eric Clapton, Bruce Willis, Bonnie Raitt, Dr. John and Keith Richards, as well as appearances by Mick Jagger and President Obama. This is a powerful feature that explores how a black cotton picker from Mississippi turned his life around and battled against unrelenting racism to overcome even the toughest critics."

Lucky Number Slevin (2006)- "A mysterious man is roped into a dangerous feud between two rival crime kingpins, neither of whom can step foot outside for fear of assassination."

March of the Penguins (2005)- "Intrepid emperor penguins brave frigid conditions in Antarctica in order to have a successful mating season and raise their new offspring."

Now You See Me (2013)- "Four cunning magicians are trailed by a federal agent and an Interpol detective, who attempt to figure out how they rob corrupt leaders."

Street Smart (1987)- "A down-on-his-luck journalist is drawn into a world of crime when his fabricated story is identical to that of an infamous pimp wanted for murder."

The Bucket List (2007)- "A billionaire and a mechanic each receive a grim medical diagnosis. Together, they decide to spend the rest of their lives doing exactly what they want."

The Magic of Belle Isle (2012)- "A famous Western novelist, whose passion for writing hits an impasse, takes a lakeside cabin for the summer and finds inspiration in the family next door."

Transcendence (2014)- "After a scientific trailblazer is assassinated by an anti-technology radical, his consciousness is brought back in a powerful form."

Under Suspicion (2000)- "After finding a dead body of a girl, a prominent lawyer is called into a police station for interrogation but, over the course of a night, the police hope to prove that he is the killer."