An Arizona CEO is offering a $5,000 bonus for new hires to quit after just two weeks into their new jobs as part of a unique approach to staff retention as a "great resignation" sweeps the American workforce. Chris Ronzio, CEO of the Arizona-based software company Trainual that helps small businesses onboard, train and scale teams, is taking a unique approach to the nationwide issue of worker retention by instead paying new hires a $5,000 bonus to quit at the two-week mark into their new jobs.

WASHINGTON - As companies struggle to hire and retain employees amid the COVID-19 pandemic, one CEO is using a unique business model to attract top talent by offering them $5,000 to quit the job after two weeks at the company.

Chris Ronzio is the CEO of Trainual, an Arizona-based software company that helps small businesses onboard, train and scale teams. Ronzio said the company implemented the $5,000 incentive which was initially set at $2,500.

"We’ve been doing this since May of 2020. So, the story is we have an engineer and developer start and five days into his job he told us, ‘You know I think this isn’t the right fit, it’s not the right role and I had other offers so I’d rather go back and take those offers.’ And we said OK perfect, no hard feelings," Ronzio said.

"But then I started thinking how many other people get to that point in training and then just don’t say something," Ronzio continued. "And so we thought rather than have people leave three months in, six months in, when we’ve invested a lot in them, let’s accelerate this and let’s give everyone that chance to double opt-in and say yes this is the company, this is the role that I want so much so that I’ll refuse the money. So it started at $2,500 and we recently updated it to $5,000 because so far no one has taken the offer." 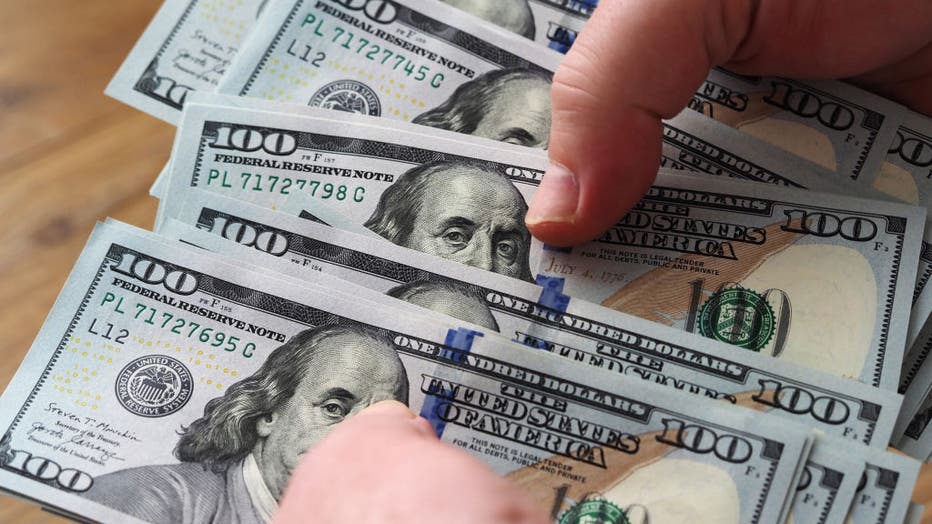 In this photo illustration, hands are seen counting US 100 dollar bills. (Photo Illustration by Valera Golovniov/SOPA Images/LightRocket via Getty Images)

According to FOX4 News, the nation's unemployment rate fell in December 2021 to 3.9%, a pandemic low even as employers added 199,000 jobs, evidence that they are struggling to fill jobs with many Americans reluctant to return to the workforce.

Ronzio said there are more opportunities for employees to find jobs based on the marketplace. He said by offering a new hire $5,000, it’s equivalent to a salary replacement for a few weeks so the new employee at Trainual can take the money and leave to find another job.

Economists have warned that job growth may slow in January and possibly February because of omicron cases, which have forced millions of newly infected employees to stay home and quarantine. The economy is still about 3.6 million jobs short of its pre-pandemic level, according to FOX4.

According to Ronzio, the $5,000 incentive will remain in place for a while but there is a chance the amount could increase.

"For us it’s just setting the bar higher and higher. Imagine if you turned down $20,000 or $50,000. I feel like that would be such a testament to a culture that’s just a great place to work, so we could increase it again," Ronzio said.

Ronzio said applicants have sent him direct messages with their Venmo handles asking if they can skip the application process and get the money directly. He acknowledged that it’s competitive to get quality employees based on the marketplace as companies face challenges to hire and retain workers based on factors including pay and company culture.

"People are getting 10-15 offers and in the same way that it was hard for employers years ago to give everyone the one-on-one attention when they weren’t making an offer," Ronzio said. "It’s hard for employees when they’re getting all these offers to communicate back for every opportunity."

"So the tides have just turned a little bit. I think it’s a really great market. It’s great for companies that are having turnover issues to really take a hard look at why? What they need to improve about their business, their wages, their culture and then it’s a great opportunity for people that are in the workforce to say, ‘Is this really the job I’m happy in, is this what I want?’ It’s a positive pressure on everyone. It’s uncomfortable while it’s shaking out but I think it will result in people being in better jobs, the jobs that they really want and it will result in companies having this pressure to build better cultures," he said.

Companies posted a record number of open jobs in 2021 and offered sharply higher pay to try to find and keep workers. Last year was considered one of the best years for American workers in decades.

FOX4 News contributed to this story. This story was reported from Washington, D.C.