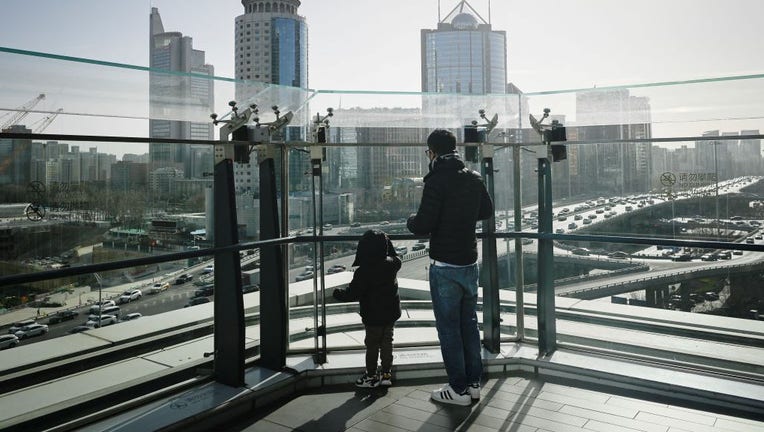 A man and a child look out at the Central Business District (CBD) in Beijing on Jan. 17, 2023. (Photo by WANG ZHAO/AFP via Getty Images)

BEIJING - For the first time in decades, China has fewer people than it did at the start of last year, according to official figures released Tuesday.

The world's most populous country has worried for years about an aging citizenry's effect on its economy and society, but its population was not expected to go into decline for almost a decade.

The National Bureau of Statistics reported that the country had 850,000 fewer people at the end of 2022 than the previous year. The tally includes only the population of mainland China, excluding Hong Kong and Macao as well as foreign residents.

Over one million fewer babies were born than the previous year amid a slowing economy and widespread pandemic lockdowns, according to official figures. The bureau reported 9.56 million births in 2022, compared to 10.62 million in 2021. Deaths rose from 10.14 million to 10.41 million.

It wasn’t immediately clear if the population figures were affected by the COVID-19 outbreak that was first detected in the central Chinese city of Wuhan before spreading around the world. China has been accused by some specialists of underreporting deaths from the virus by blaming them on underlying conditions, but no estimates of the actual number have been published.

China’s population has begun to decline 9-10 years earlier than Chinese officials predicted and the United Nation projected, said Yi Fuxian, a demographer and expert on Chinese population trends at the University of Wisconsin-Madison.

The United States has put restrictions in place for travelers coming from China as the country is seeing a surge in cases. LiveNOW from FOX talks with Doctor Schaffner, an infectious diseases expert about the latest with Coronavirus.

China has sought to bolster its population since officially ending its one-child policy in 2016. Since abandoning the policy, China has sought to encourage families to have second or even third children, with little success, reflecting attitudes in much of east Asia where birth rates have fallen precipitously. In China, the expense of raising children in cities is often cited as a cause.

Men outnumbered women by 722.06 million to 689.69 million, the bureau reported, a result of the one-child policy and a traditional preference for male offspring to carry on the family name.

China has long been the world's most populous nation, but is expected to soon be overtaken by India, if it has not already. Estimates put India's population at more than 1.4 billion and continuing to grow.

The last time China is believed to have experienced a population decline was during the Great Leap Forward, a disastrous drive for collective farming and industrialization launched by then-leader Mao Zedong at the end of the 1950s that produced a massive famine that killed tens of millions of people.

Yi said that, based on his own research, China’s population has actually been declining since 2018, showing the population crisis is "much more severe" than previously thought. China now has one of the lowest fertility rates in the world, comparable only to Taiwan and South Korea, he said.

That means China’s "real demographic crisis is beyond imagination and that all of China’s past economic, social, defense and foreign policies were based on faulty demographic data," Yi told The Associated Press.

RELATED: US population expanded by 1.2 million people in 2022, largely driven by international migration

China's looming economic crisis will be worse than Japan's, where years of low growth have been blamed in part on a shrinking population, Yi said.

If handled correctly, a declining population does not necessarily predict a weaker economy, said Stuart Gietel-Basten, professor of social science at Khalifa University in Abu Dhabi.

The statistics also showed increasing urbanization in a country that traditionally had been largely rural. Over 2022, the permanent urban population increased by 6.46 million to reach 920.71 million, or 65.22%, while the rural population fell by 7.31 million.

The United Nations estimated last year that the world’s population reached 8 billion on Nov. 15 and that India will replace China as the world’s most populous nation in 2023. India's last census was scheduled for 2022 but was postponed amid the pandemic.

In a report released on World Population Day, the U.N. also said global population growth fell below 1% in 2020 for the first time since 1950.

That was the second-lowest annual rate since at least the 1970s, after the drop to 2.4% in 2020 at the start of the coronavirus pandemic, although activity is reviving after the lifting of restrictions that kept millions of people at home and sparked protests.

Gietel-Basten said China has been adapting to demographic change for years by devising policies to move its economic activities up the value chain of innovation, pointing to the development of semiconductor manufacturing and the financial services industry.

"The population of India is much younger and is growing. But there are many reasons why you wouldn’t necessarily automatically bet your entire fortune on India surpassing China economically in the very near future," he said.

Among India's many challenges is a level of female participation in the work force that is much lower than China’s, Gietel-Basten said.

"Whatever the population you have, it’s not what you’ve got but it’s what you do with it … to a degree," he said.

RELATED: Having a strong sense of purpose in life may help you live longer, study suggests