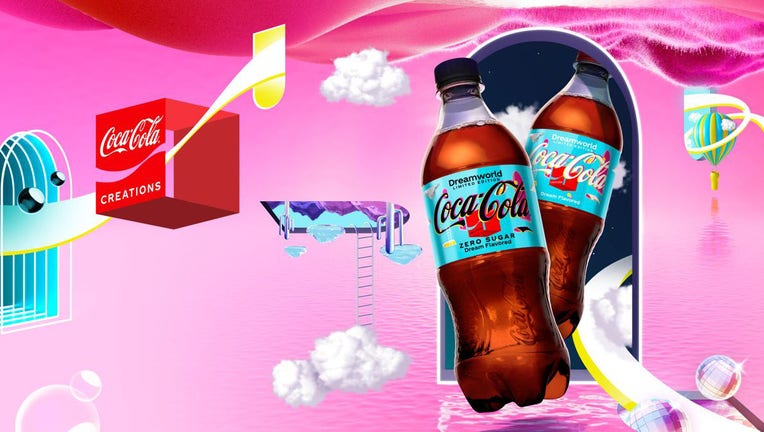 Coca-Cola is delving into the realm of dreams with the launch of its latest creation with its new "Dreamworld" fantasy flavor.

Consumers can get their hands on the limited-edition Coca-Cola Dreamworld and Coca-Cola Zero Sugar Dreamworld flavors when it hits store shelves in the U.S. on Monday, Aug. 15.

"We took inspiration from the technicolor world of dreams, adding a dash of vibrant flavors to our great Coca-Cola® taste. We wanted the flavor profile to nod to playful fantasy, a Coca-Cola spokesperson tells FOX Television Stations.

Dreamworld cans and bottles have a QR code that people can scan from their phones to access an "augmented reality, music experience," the company explained.

"Coca-Cola Dreamworld taps into Gen Z’s passion for the infinite potential of the mind by exploring what a dream tastes like," Alessandra Cascino, Creative & Shopper Program Director, Coca-Cola North America Operating Unit, said in a statement. "Like the Coca-Cola Creations that came before it, Dreamworld plays with the unexpected and will no doubt provoke discovery and debate among consumers… which we welcome."

The Coca-Cola Co. posted strong sales in the second quarter due to price increases and rising demand from restaurants, theme parks and other venues.  Coke said it expects organic revenue growth of between 12% and 13% for the full year. That's up from earlier projections of a 7% to 8% increase.

Revenue grew 12% in the April-June period to $11.3 billion, the Atlanta company said. That was well ahead of the $10.56 billion Wall Street forecast, according to analysts polled by FactSet.

In North America, case volumes were up 2%. Coke benefited from higher prices as well as strong sales of premium drinks like Fairlife milk and Smartwater.

Higher operating costs and increased spending on marketing impacted its profits. Coke said its net income fell 28% to $1.9 billion for the quarter. That included losses related to the suspension of its business in Russia due to its invasion of Ukraine.