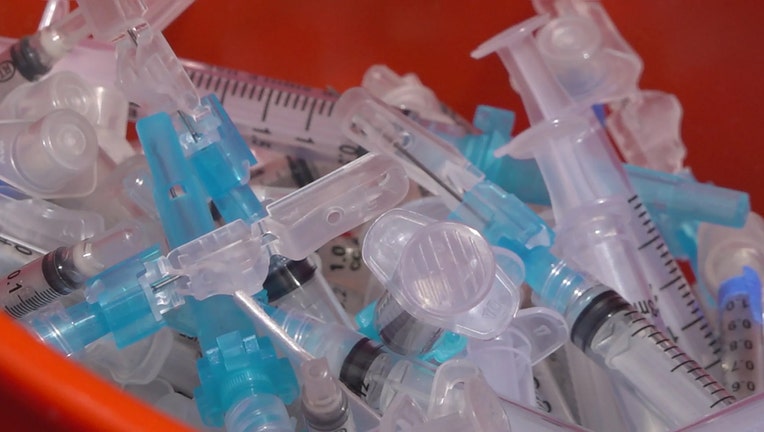 As millions of vaccines roll out daily, the process of disposing needles safely and efficiently can be quite the task. (Stephanie Bennett/Fox News)

FLAGSTAFF, Ariz. - An unintended consequence of COVID-19 has been a surge in new trash, from face masks, wipes, and gloves to now used syringes.

As millions of vaccines roll out daily, the process of disposing needles safely and efficiently can be quite the task.

The process of needles or "sharps" disposal must follow certain guidelines. In Arizona, those are outlined by the Arizona Department of Environmental Quality.

The most common methods of disposal are grinding, burying, or autoclaving, a process that steam cleans the needles before disposal.

"With a large number like this, it's important that there are a vast number of opportunities that are available to organizations," Baer said.

Some companies are trying more environmentally-friendly methods. OnSite Waste Technologies out of California said their latest device can save time, money and resources by compressing up to 200 needles at once into a safe brick. The company said 38 states are already using the method. 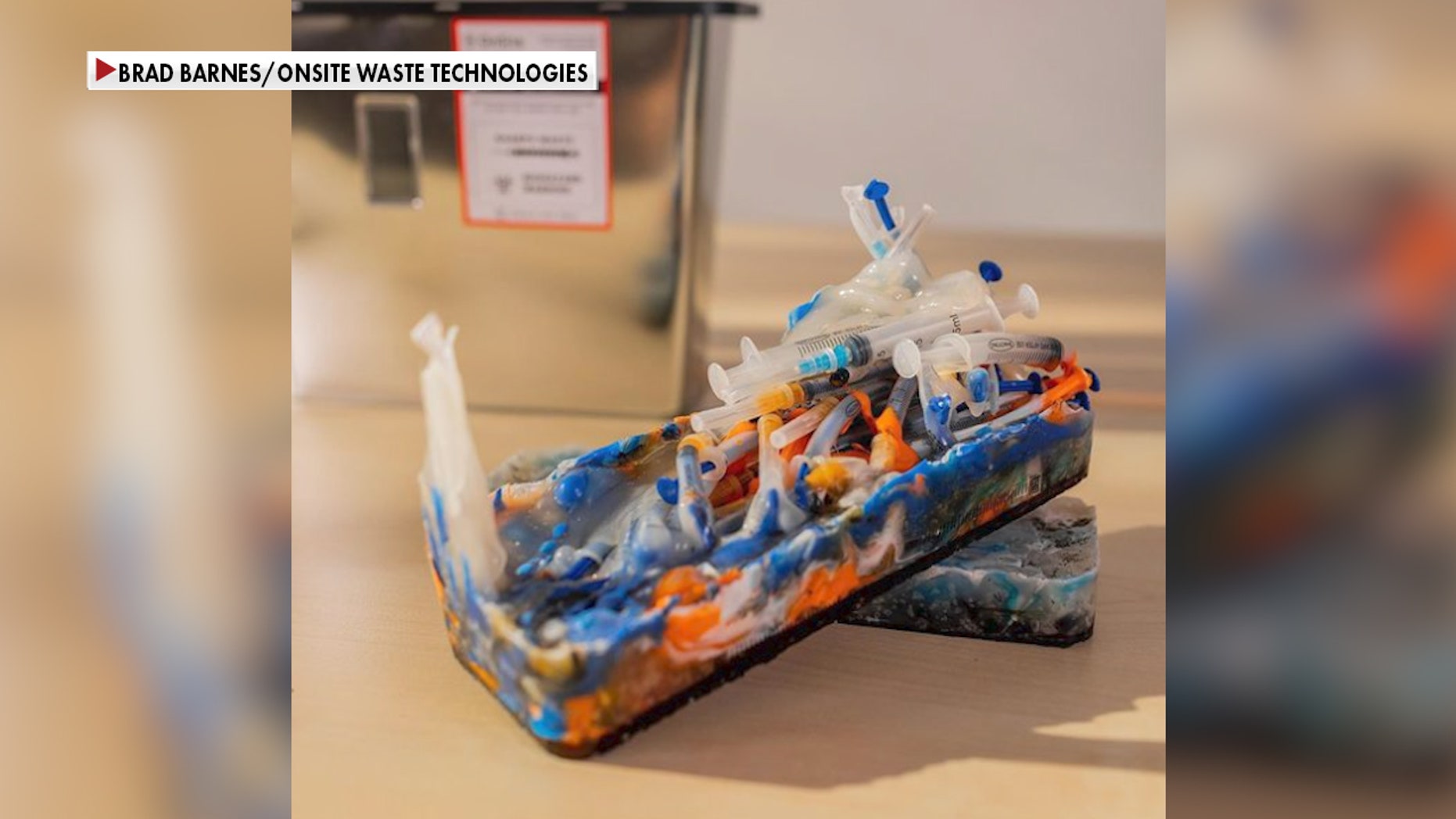 "All of the sharps waste that's taking place today, we can treat it immediately right on the site, and we turn it into regular trash," Brad Barnes, CEO of OnSite Waste Technologies said.

The company estimates about 660 million syringes are needed to inoculate the entire U.S. population. If laid end to end, that would create enough waste to wrap around the earth about 1.8 times. Their containers can condense the needle waste by around 80%. It uses thermal heat to treat the waste so it’s safe to throw away into the landfill.

"It will take about 3.6 million volumes of carbon emission, we reduce that down to about 200,000 levels of emission," Barnes said.

Coconino County in Arizona is the second-largest county by landmass in the U.S. Officials there said disposing of all their used COVID-19 vaccine syringes is a costly task.

"It would be thousands of dollars if not tens of thousands," Wes Dison, Coconino County Emergency Management Director, said.  "For example, the sharps containers are about $150 a piece, they are one-time use, they don't come back, they leave with the biowaste in them and they never come back. We have to replace all of those."

Mann is no stranger to the industry and has been removing medical waste for years, but the pandemic has made him busier than ever. After realizing the financial burden this could create for the county, he’s offering his services for free, disposing of all their used COVID-19 needles about twice a week.

"I can't give shots, I can't do any of those things, but I can do probably the one thing that nobody else can do, and I can get rid of all of these needles for you and I'm not charging you a thing. I live in this county, I’m apart of this community, and I'm happy to step up," Mann said. 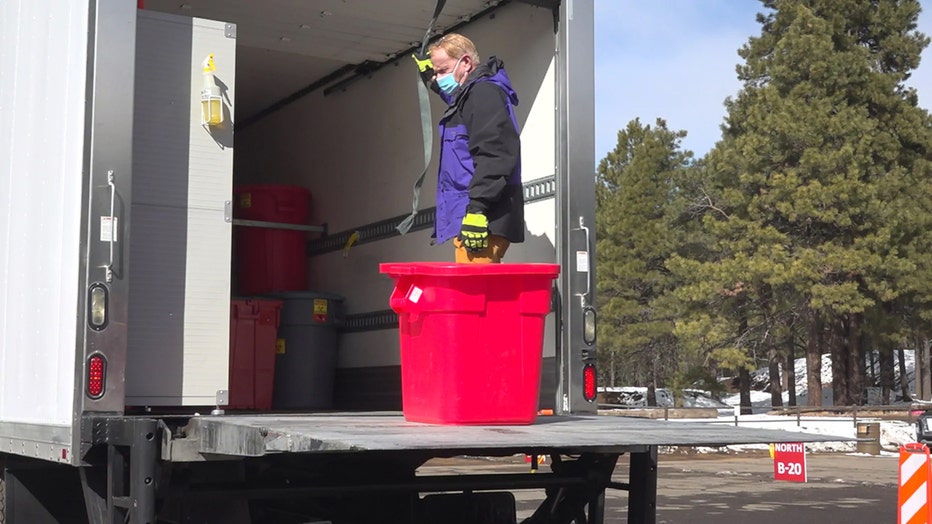 Following the approved guidelines, after Mann picks up the needles from the Fort Tuthill vaccination location in Flagstaff he then drives them three hours east to one of the only landfills in Arizona that takes untreated medical waste. Since he has a refrigerated truck he can hold the needles for 96 hours before they need to be dumped.

For now, Mann said he’ll continue to help out until June or until the county says he’s no longer needed. The most important part of all of this he said is making sure the needles are taken care of and are out of harm's way. 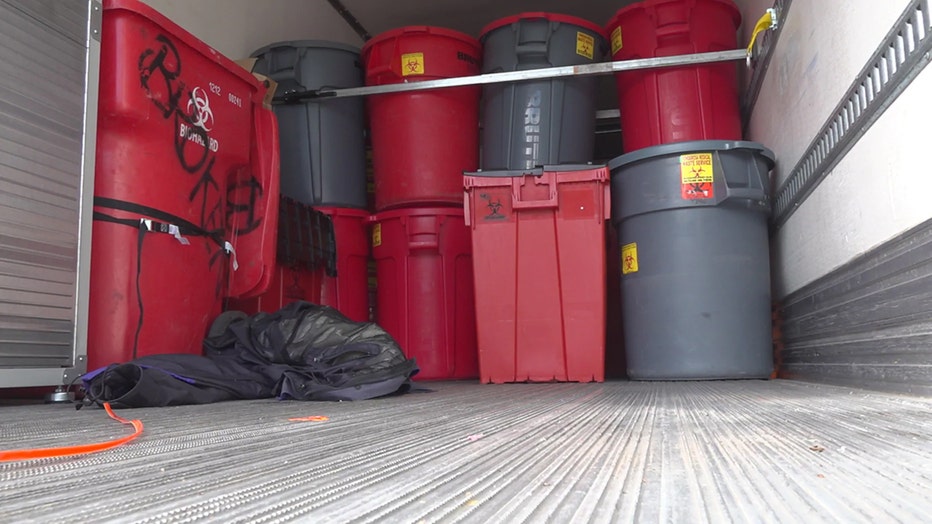 "It's a tight community and that's an awesome part of it, and there's always people helping each other out around here," said Mann. "If all these folks are going to be out here working. I’ll work too I don't mind a bit."

Needles and glass vials can’t be recycled, but other waste including packaging and boxes may be sent back to the manufacturer.