Hubert Miller was 19 when he stormed the beaches of Normandy in 1944 to help liberate German-occupied France with thousands of other Allied soldiers.

A British World War II veteran who received the Chevalier de la Legion d’Honneur for his bravery as a teenager celebrated his 95th birthday Sunday with a surprise party.

Hubert Miller was just 19 when he stormed the Normandy beaches to help liberate German-occupied France in June 1944 along with thousands of other Allied soldiers.

Hubert, who was awarded the highest French order of merit three years ago for his brave actions that day, served in the British Royal Artillery regiment during the war.

As the nation remembered its war dead Sunday, the day took on an extra poignancy for Hubert as it fell on his 95th birthday.

The sprightly great-grandfather attended his local remembrance service as he does every year before his family surprised him with a birthday party at his home.

Proud son Ian, 52, said: "We started the day with a skype call to my sister Julie in Australia and his great-grandchild who he has never met.

"Then we went to the remembrance service and took him for a coffee, where all his friends were waiting to surprise him.

"He's amazing, he's such an inspiration.

"He has had a couple of strokes and a few heart problems, but he has not let that get him down. 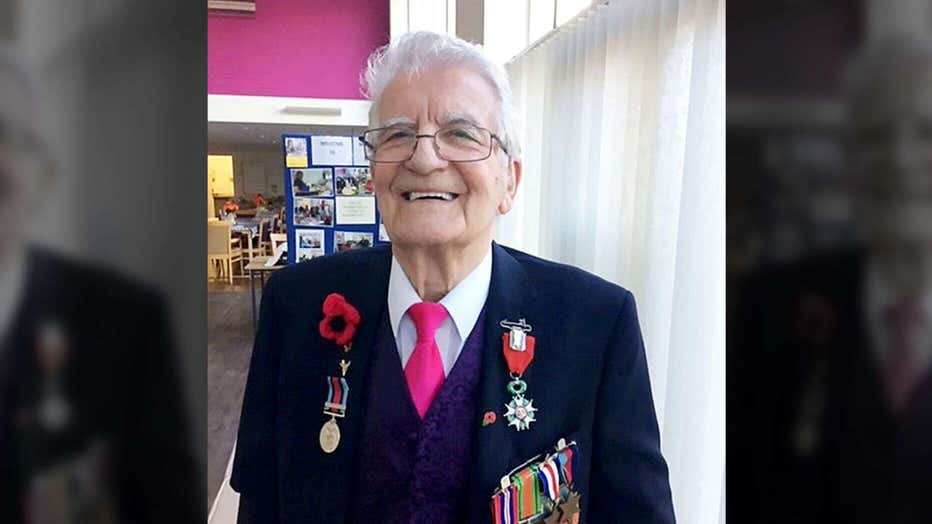 The veteran received a surprise birthday party from his family Sunday, the same day his country remembered the military fallen. (Photo credit: SWNS)

Hubert has lived in Royston all his life and went on to work as a bus driver and a coal miner after the war.

After retirement, he would volunteer as a driver for Age UK and Help the Aged charities and would often be driving people younger than him around as part of his duties.

Ian added: "He was driving until he was 91 and still lives independently in sheltered housing.

"For his 90th birthday, we flew to Australia to visit my sister.

"While people his age are struggling to go on coach trips, he's been flying to Tenerife.

“He’s one of the oldest surviving Normandy veterans in the area.

“Every year we go to church for the Remembrance service and we always know it’s going to be around his birthday.

"Obviously this year it’s on his birthday, but it was only this week I twigged his birthday was the same day so we wanted to do something special for him.

"It's extra special as it is in the year of the 75th anniversary of the D-Day landings.

"He is a very proud chap and he never spoke too much about the war.

"He had a really bad experience where he was in a jeep that was blown up and he went unarmed behind enemy lines to get help.“