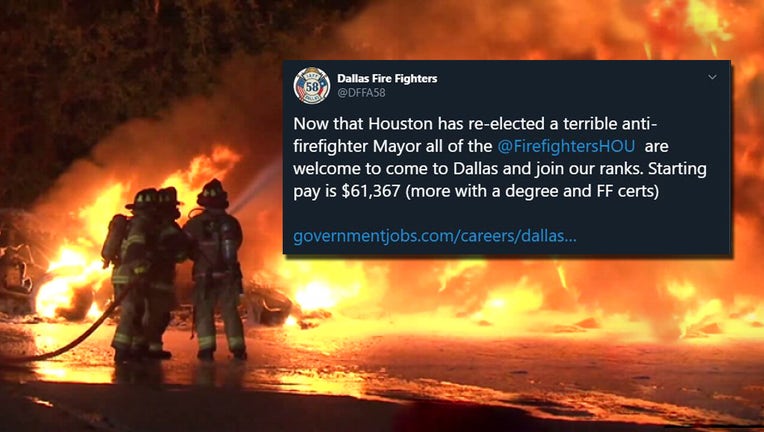 Mayor Turner's intense battle with the Houston Fire Department over Proposition B, which requires pay parity between police and firefighters of equal rank, has garnered national attention.

READ MORE: How much do Houstonians know about Prop B?

Following Saturday's election results, the Dallas Fire Fighters Association tweeted out a link to its job application site with the caption, "Now that Houston has re-elected a terrible anti-firefighter Mayor all of the Houston firefighters are welcome to come to Dallas and join our ranks. Starting pay is $61,367."

According to HFD careers, a first-year firefighter in Houston earns $43,528.

Houston voters approved Proposition B November 2018, but its implementation became a controversy between Mayor Turner, the City Council, and the Firefighters’ Union that included layoffs and failed solutions.

In May, a judge ruled Prop B "unconstitutional and void," and the firefighters responded with an appeal. But a state court ordered all sides to go to mediation to find a compromise, which still has not been found.