WASHINGTON - Congressional leaders reached an elaborate deal Tuesday that will allow Democrats to lift the nation’s debt limit without any votes from Republicans, likely averting another last-minute rush to avoid a federal default. Hours later, the House passed legislation overwhelmingly along party lines that kicked off a multi-step process.

Congress approved a $480 billion increase in the nation’s debt limit in October. That’s enough for the Treasury to finance the government’s operations through Dec. 15, according to Treasury Secretary Janet Yellen's projection.

But Republicans have warned they won't vote for any future debt ceiling increase to ensure the federal government can meet its financial obligations, and instead, the politically unpopular measure would have to be passed entirely by the Democratic majority in both chambers of Congress.

President Joe Biden had called on Republicans to "get out of the way" if they won’t help Democrats shoulder the debt responsibility. But rather than step aside and allow for a quick vote, Senate Republican leader Mitch McConnell has helped engineer an unusual legislative process that will play out over the next several days. Donald Trump, the former president, ridiculed McConnell for allowing any action, showing just how politically toxic the routine act of paying the nation’s bills has become. 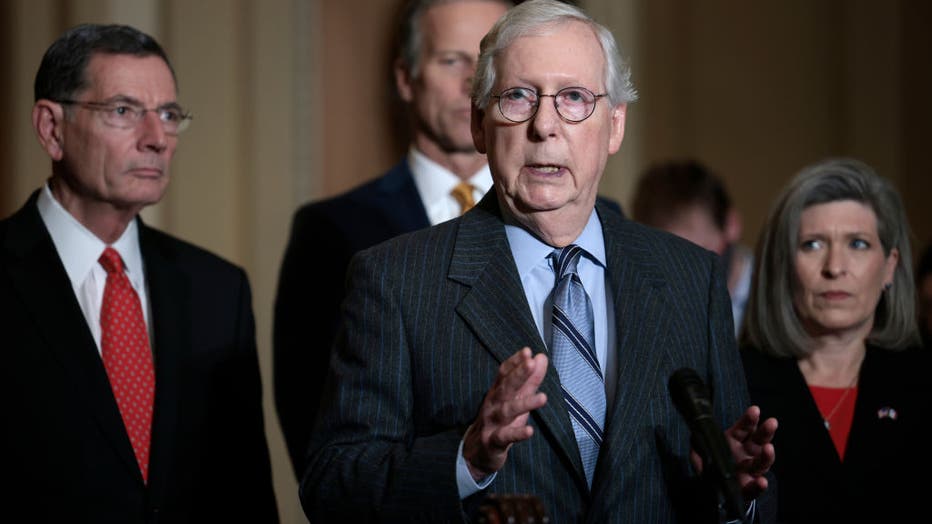 The agreement spelled out in the House bill passed Tuesday establishes the days-long process ahead. In short, it would tuck a provision to fast-track the debt limit process into an unrelated Medicare bill that will prevent payment cuts to doctors and other health care providers. That measure passed the House by a vote of 222-212 with only Republican, Rep. Adam Kinzinger of Illinois, siding with Democrats in voting for the measure.

The measure now goes to the Senate, and if the Medicare bill becomes law, it will open the process for the Senate to raise the debt ceiling through subsequent legislation with a Democrats’ only majority vote.

"This is a very good outcome for the American people. We will avoid default, which would have been disastrous. Democrats have always said that we were willing to shoulder the load at 50 votes to get this done as long it was not a convoluted or risky process, and Leader McConnell and I have achieved that."

Key to the agreement is that Democrats will have to vote on a specific amount by which the debt ceiling would be lifted. The amount has not yet been disclosed, but it is sure to be a staggering sum. Republicans want to try to blame Democrats for the nation’s rising debt load and link it to Biden’s roughly $2 trillion social and environmental bill.

"To have Democrats raise the debt ceiling and be held politically accountable for racking up more debt is my goal, and this helps us accomplish that," said Sen. John Cornyn, R-Texas.

The increase in the debt ceiling, however, is needed to meet financial obligations accrued by both parties under past legislation. The vast majority of it predates Biden's presidency.

"This is about meeting obligations that the government has already incurred, largely during the Trump Administration," House Speaker Nancy Pelosi said in a letter to Democratic colleagues. "Only three percent of the current debt has been accrued under President Biden."

Pelosi said that addressing the debt limit will prevent a drastic increase in interest rates for car loans, student debt, mortgages and other types of borrowing for Americans.

The legislation before the House on Tuesday establishes a fast-track process for the days ahead. A subsequent vote will be needed to pass the debt ceiling increase itself. Once the Senate has done so, the House will take up the bill and send it to Biden to be signed into law.

At their private luncheon Thursday, Republican senators sounded off against the plan. Many of them will not support it.

Sen. Roy Blunt, R-Mo., a member of GOP leadership, said the lunch discussion went about as would be expected — though he said the plan at least allows Republicans to achieve their goal of forcing Democrats to vote on their own to raise the debt ceiling by a specific amount.

The parliamentary machinations struck some House lawmakers as an "absurd" but necessary way to deal with the Senate, where the filibuster rules allow the Republican minority to block action.

"We’re tying ourselves into parliamentary contortions to try to help the Senate deal with this straitjacket they have put themselves into," Rep. Jamie Raskin, D-Md., said.