Dog recovering in Lakeway after near-death experience with Mexican cartel

Thanks to an Austin rescue organization, that dog is now making a miraculous recovery at a vet's office in Lakeway, but he isn't out of the woods just yet.

LAKEWAY, Texas - A woman in Mexico risked her life to save a dog left for dead by the cartel.

Thanks to an Austin rescue organization, that dog is now making a miraculous recovery at a vet's office in Lakeway, but he isn't out of the woods just yet.

Two weeks ago the pup didn't have much of a chance. He had been shot six times, hit by a car and left to die on the side of a highway taken over by the cartel. "We went to rescue him and they told us he was hurt on the side of the road," said Rosario Garcia who spends her time rescuing dogs in Mexico. 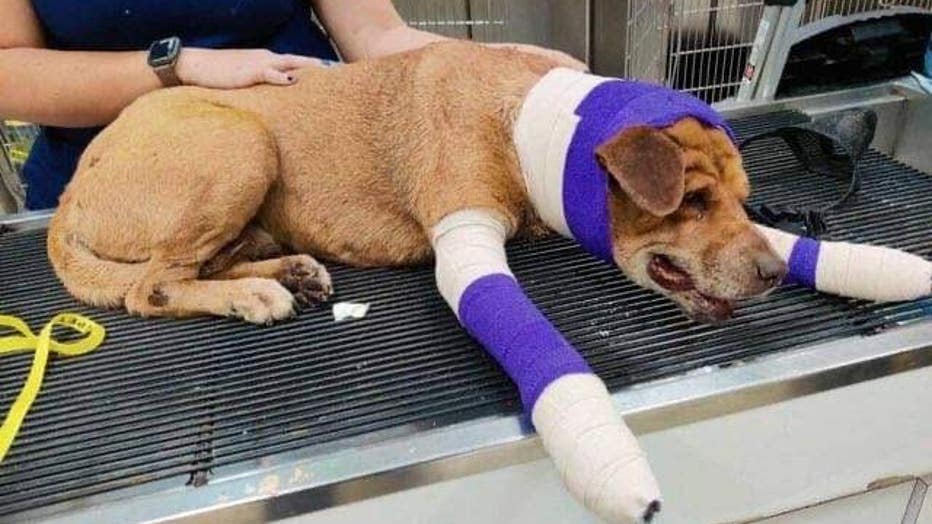 Garcia risked her life, driving into cartel territory on a stretch of highway between Camargo and Miguel Aleman. "They throw what they call spikes and that’s why the veterinarians won’t go out there. I was there, stranded with a flat tire. I ran over one and the cars in front of me ran over them and they cleared a path for me," Garcia said.

She drove home with the spike still stuck in her tire.

Amy Stanton, Texas director at Addicus' Legacy Dog Rescue in Austin saw the story online and joined in the mission to save the injured dog. "At that point, we found a volunteer in the U.S. that met Rosario at the bridge and actually crossed him over to the U.S., which was a whole other process," said Stanton.

The dog, now named Freedom, stayed at an animal hospital in McAllen for several days. "His pain levels were so high. He was septic, infection was setting in, he had a lot of injuries around his jaw, his legs were infected. He wouldn't have survived if he hadn't gotten to the ER vet in McAllen," Stanton said.

She knew Freedom also needed surgery, so she brought him to the Lakeway Veterinary Clinic.

"His jaw is not going to open like a normal dog's jaw... So he's going to be on soft food for the rest of his life," said Dr. Heidi Moore, associate veterinarian at Lakeway Veterinary Clinic.

The nine dogs and six puppies from Del Rio should be up on the Texas Humane Society's website by Tuesday night.

Even though it took a trip across the border and thousands of dollars worth of medical care, no one gave up on Freedom and he never gave up either.

"I believe he's going to be okay. He definitely has the will to live... He was jumping around, he was saying hello to everybody this morning, running up to them, greeting them. Yeah, he's kind of the mascot of the place right now," Moore said.

There is a fund set up on Facebook to help with Freedom's medical costs. Addicus' Legacy is also looking for the right foster in Austin who can give him a quiet place to rest and recover.