A trailer for "Dune," directed by Denis Villeneuve, in theaters everywhere and streaming on HBO Max Oct. 22.

CHICAGO - Frank Herbert’s seminal sci-fi novel "Dune" has long seemed unadaptable. David Lynch and stars Kyle MacLachlan and Virginia Madsen gave it a crack in 1984, resulting in a strange, S&M-inspired take that condensed the 600-page doorstop to about two hours. That "Dune" captured the psychedelic spirit of the novel, but not its scope. And a pair of Sci-Fi (now SYFY) Channel miniseries in the 2000s had sufficient room to let the story’s ideas breathe, but suffered from budgetary (among other) limitations.

But now, Quebecois auteur Denis Villeneuve brings "Dune" to the big screen once again. This titanic adaptation of "Dune" is perhaps the most gorgeous, sharply-realized vision of the world yet. It also happens to effectively be half a movie, its huge cast of characters lost in the infinite sands of its setting, drowned in oodles of lore.

About ‘Dune’: Spice, sandworms, and the salvation of humanity

To whittle the dense, complicated premise of "Dune" to its core: In the far future, humanity has spread among the stars thanks to a life-enhancing, space-folding super-dust known as Spice. The problem is, Spice can only be found on one planet: Arrakis, a.k.a. Dune, an inhospitable planet filled with giant sandworms and an indigenous population (known as the Fremen) understandably opposed to imperial colonization.

Enter the House Atreides, a noble family recently tasked by the emperor to take stewardship of Dune after kicking out their rivals, House Harkonnen. Duke Leto (Oscar Isaac), his concubine Jessica (Rebecca Ferguson) and young son Paul (Timothée Chalamet) come to the planet by Imperial decree, only to walk into a trap set by the malevolent Baron Harkonnen (Stellan Skarsgård, enveloped in prosthetics and makeup).

RELATED: William Shatner in space: Celebrate the icon with these free movies

The family’s only hope lies in Paul, who begins having visions as a result of his consumption of Spice. There are prophecies about the young man, prophecies which took root long before Paul set foot on the desert planet: that the young Atreides is a messiah, destined to free the Fremen and bring about a new era for humanity. 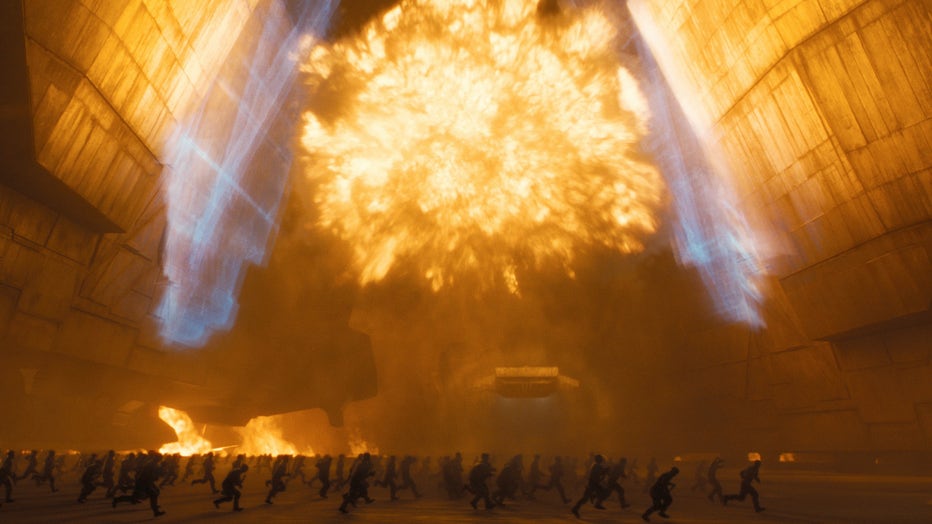 Don’t expect to get very far into that journey, however; the frustrating, albeit understandable, thing about Villeneuve’s adaptation is that it only covers the first half of the book it’s adapting. Even the title card reads "Dune: Part One," a gentle indicator that the next two and a half hours are going to be filled with setup.

And set up it does: The screenplay, penned by "Prometheus" scribe Jon Spaihts alongside Eric Roth and Villeneuve himself, spends a whole lot of time establishing the strange, alien universe it clearly wants to explore further in other installments. It’s reasonably effective, all things considered, but it’s not all that satisfying.

The writers wisely give ample space for scenes involving Paul’s budding place in this interstellar tapestry, leaning into the elements of the novel that serve as a coming-of-age story. But other scenes breeze by with the speed of Dan Brown chapters, Villeneuve cutting back to the Harkonnens for a quick explanation of that storyline before flitting back to Dune for more character-building with our main cast.

One of the major challenges facing anyone who attempts to adapt "Dune" for the screen is the sheer volume of characters and subplots necessary for its main story to work. Villeneuve does his level best to pick a lane (Paul) and stick to it, but it means the rest of the colors on his palette get muddled.

RELATED: ‘The Last Duel’ review: A grim medieval epic with the bite of ‘Mean Girls’

But if the adaptation makes some missteps, the same cannot be said of the visual storytelling. "Dune" looks as though every penny of its budget (reportedly in the ballpark of $165 million) was put to good use. Villeneuve conjures a fully-realized universe rich with texture, thanks in no small part to Patrice Vermette’s production design and Greig Fraser’s sand-dusted cinematography.

That level of excellence exists elsewhere in the film as well. Jacquline West and Bob Ward’s costumes do more world-building than a million monologues ever could. The Harkonnens are kitted out in slick black leather to fit their hairless, pale visages, while the Bene Gesserit (think ‘space witches’ and you’re not far off) move about in sheer veils to obscure their faces and their shadowy plans for humanity.

See ‘Dune’ for: a compelling visual world and the great Rebecca Ferguson

Villeneuve has been adamant that viewers should see "Dune" in a theater, and it's easy to understand why: The grand scope of the thing cries out for the biggest screen possible, and the booming sound design and Hans Zimmer’s almost overwhelming score deserve suitably robust speakers. Vermette's production design blends brutalist futurism with rococo curves and impossible shapes, a mix that's truly something to behold. 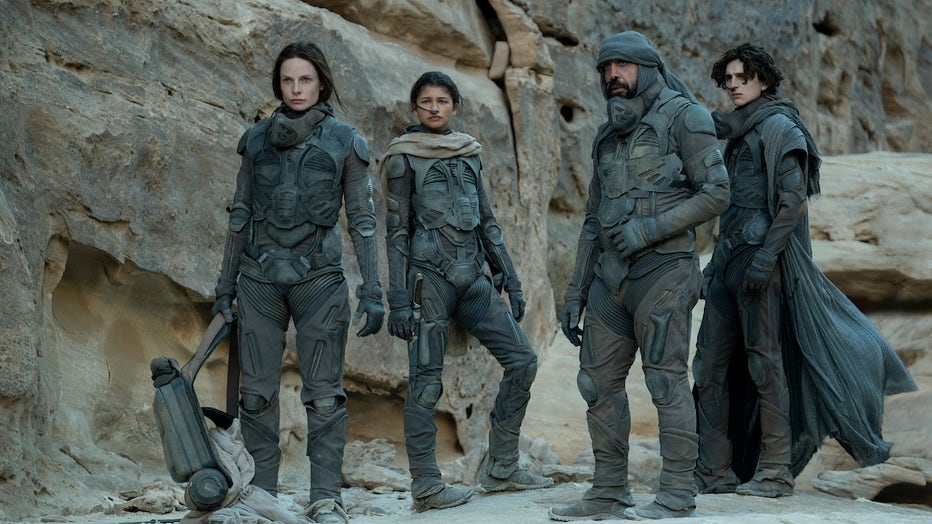 But like many expensive-looking sci-fi adaptations — see Apple TV+’s "Foundation" for another recent example — the human element of "Dune" is dwarfed by the film’s big ideas and even bigger canvas. Chalamet’s Paul is all brooding insecurity, half his lines mumbled as if his jaw is wired shut; he finds moments of nuance and intensity in Paul’s furtive steps into the role of unlikely messiah, but he’s limited by the stone-faced tone of Villeneuve’s take.

Most of the rest of the characters get little to set themselves apart from their staid proclamations. The only exceptions are Josh Brolin’s grumpy Gurney Halleck and Jason Momoa’s Duncan Idaho, action heroes set loose in a sea of self-seriousness. The reliable Rebecca Ferguson acquits herself with grace, and her work makes Jessica the closest thing the film has to a dimensional, fully-realized character. The rest, alas, are cogs in the worldbuilding machine, fighting for screentime before many of them are unceremoniously offed.

As a result, "Dune" feels like a whole lot of place-setting, as though it’s an incredibly expensive pilot episode for a TV show that may never become a series. Here’s to hoping that solid streaming numbers and an already-respectable overseas box office take give Villeneuve the latitude to make "Dune: Part Two." The path is laid before him now: the story must flow.

Labyrinth (1986): This Jim Henson musical classic stars an unforgettable David Bowie in an unforgettable wig and some unforgettable pants. Bowie plays Jareth the Goblin King, the exuberantly-haired antagonist to Jennifer Connelly’s determined young heroine Sarah. Come for the twists and turns (it’s a layrinth, get it?) but stay for "Dance Magic Dance." 101 minutes. Rated PG.

The Fountain (2006): Auterist filmmaker Darren Aronofsky directs Hugh Jackman and Rachel Weisz in this densely-packed, emotionally rich film, which chronicles "a man's thousand-year struggle to save the woman he loves as he embarks on three quests across three lives." 96 minutes. Rated PG-13.