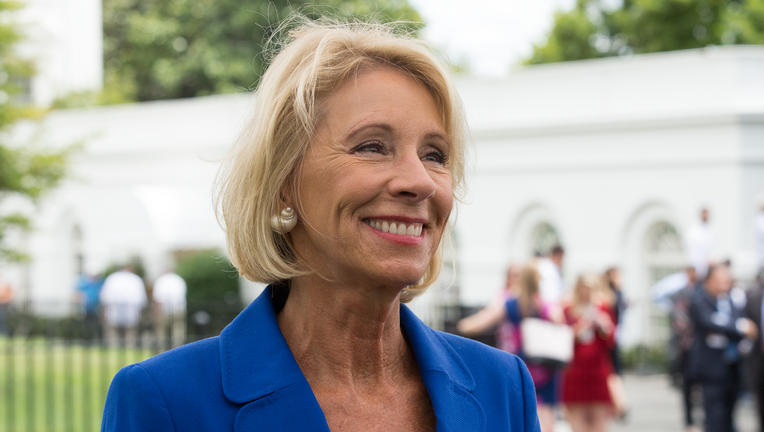 BALTIMORE (AP) - Education Secretary Betsy DeVos said Monday that teachers are walking off the job too often and that protests about pay and school conditions should be done on "adult time" so students aren't hurt.

DeVos made the comments in Baltimore while speaking at a conference for education journalists.

Teachers from West Virginia to California have walked out of classrooms in recent months to protest working conditions and call for better benefits. Many have demanded changes including higher pay, smaller class sizes and more classroom funding.

When asked if she supports teachers who have gone on strike, DeVos said she thinks "great teachers need to be well paid," but that issues should be resolved without disrupting school instruction.

"I think it's important that adults have adult disagreements on adult time, and that they not ultimately hurt kids in the process," DeVos said. "I think too often they're doing so by walking out of classrooms and having arguments in the way that they are."

DeVos, who has often been at odds with major teachers unions, took a dig at Randi Weingarten, president of the American Federation of Teachers. That union has been highly critical of DeVos.

"Great teachers perhaps should be making at least half as much as what Randi Weingarten does at a half million dollars a year," DeVos said.

Weingarten responded quickly, saying she would be "delighted if Betsy wants to get all teachers close to $200,000 - they deserve that - and so much more." The union leader said, "We could do this if Betsy worked with us to revoke tax cuts for rich people. She won't even have to give up the summer homes and the yachts."

Educators in Oregon could be the latest to go on strike, with tens of thousands expected to walk out Wednesday in protest of class sizes and education funding. It would follow a string of recent strikes in Los Angeles, Denver and Oakland, California, along with statewide walkouts in West Virginia and Oklahoma.

DeVos' speech was her first appearance at the annual Education Writers Association national seminar, a regular stopover for her predecessors. In prepared remarks, she discussed her aversion to the public spotlight and said she prefers to keep the focus on students.

"The simple truth is I never imagined I'd be a focus of your coverage. I don't enjoy the publicity that comes with my position. I don't love being up on stage nor any kind of platform. I am an introvert," she said. Education, she said, "is not about Betsy DeVos nor about any other individual. It's about students."

She acknowledged that it's a tough task, saying that "change for many people is hard."

"This is something that Congress ultimately has to either embrace or not. I acknowledge that it's a process, not an event."

Facing questions from journalists, DeVos defended her department's efforts to revoke Obama-era rules guiding schools on a range of topics, including protections for transgender students and rules meant to help students who are defrauded by for-profit colleges.

DeVos said the Obama-era rules were an overreach and offered protection only "on paper."

When asked whether she would stay in her post if President Donald Trump is reelected in 2020, DeVos answered with a quip.

"I'm not sure my husband would be OK with that," she said.