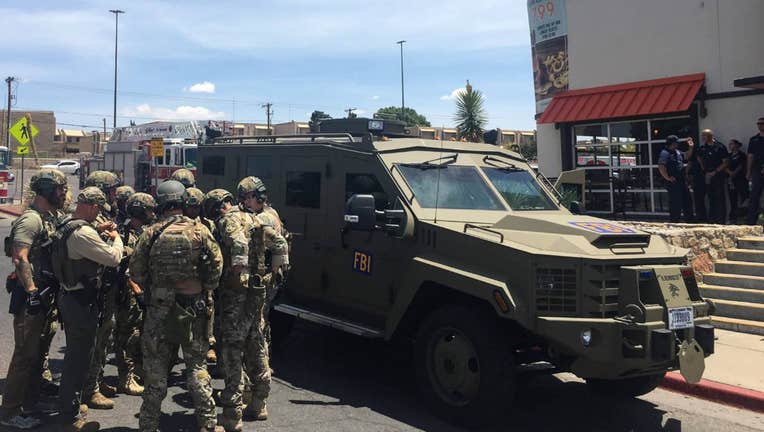 Armed Policemen gather next to an FBI armored vehicle next to the Cielo Vista Mall as an active shooter situation is going inside the Mall in El Paso on August 03, 2019. (Joel Angel Juarez/AFP/Getty Images)

EL PASO, Texas - A gunman killed 22 people and injured 24 others Saturday after he opened fire at a Walmart in El Paso, Texas, state and city officials said.

A Justice Department official says the federal government is treating the El Paso shooting as a "domestic terrorist" case.

U.S. Attorney John Bash said Sunday at a news conference in El Paso that the federal government is also investigating the attack with a view toward bringing federal hate crime charges.

Authorities have been working to confirm whether a racist, anti-immigrant screed posted online shortly before the attack was written by the suspected gunman, 21-year-old Patrick Wood Crusius.

"Texas grieves with the people of El Paso today," said Gov. Greg Abbott at an evening news conference following the deadliest mass shooting in America since a gunman killed 26 people at a church in Sutherland Springs, Texas on Nov. 5, 2017.

"The scene was a horrific one," said El Paso Police Chief Greg Allen, who added that many of the wounded had life-threatening injuries.

The suspected gunman has not been publicly named, but two law enforcement officials identified him to The Associated Press as 21-year-old Patrick Crusius of Allen, Texas. It was unclear what connection the suspect had to El Paso. Texas state lawmaker Jeff Leach said in a tweeted statement that the suspect graduated from Plano Senior High School in 2017.

More than a dozen law enforcement officials were seen Saturday evening surrounding a home in Allen, which is about 26 miles north of Dallas. The group included agents from the FBI, Texas Department of Public Safety and federal Bureau of Alcohol, Tobacco, Firearms and Explosives. A woman answered the door after a group of officers knocked. They appeared to speak with her briefly, and then she closed the door. A short time later, the door reopened and officers entered.

Neighbor Alice Baland, who lives four houses down, told The Associated Press a retired couple lives at the home associated with the suspect. She described them as sweet people who regularly attend church.

Allen said his department received initial reports of the shooting at 10:39 a.m. and first responders arrived six minutes later. Police asked people to stay away from the area and to look for missing family members at a school being used as a reunification area. El Paso Police Sgt. Enrique Carrillo told reporters shortly before 1 p.m. that one person was in custody and there was no longer an "imminent threat" to the area.

At an earlier news conference, El Paso Police Sgt. Robert Gomez said the suspect was taken into custody without incident and no law enforcement officers fired their weapons. The Walmart was near capacity at the time of the shooting, with as many as 3,000 people inside along with 100 employees during the busy back-to-school shopping season.

"This is unprecedented in El Paso," said Gomez.

Ryan Mielke, a spokesman for University Medical Center of El Paso, told Fox News that 13 patients -- one of whom died at the hospital -- were being treated at the facility's Level 1 trauma center. Mielke told the Associated Press that two children, ages 2 and 9, were stabilized at the medical center before being transferred to the neighboring El Paso Children's Hospital.

Del Sol Medical Center told Fox News it had received 11 patients, 9 of whom were critical but stable condition and two who were in stable condition. The patients' ages ranged from 35 to 82, the hospital said.

El Paso police said Monday that an injured victim died at the hospital, bringing the death toll to 21.

Sad to report that the number of fatalities increased by one. Victim passed early this morning at the hospital.

Residents were volunteering to give blood to the injured in response to a police tweet that donations were "needed urgently," while police and military members were trying to help people who were looking for missing loved ones.

"It's chaos right now," said Austin Johnson, an Army medic at nearby Fort Bliss, who volunteered to help at the shopping center and later at the school that was serving as a reunification center.

Terrible shootings in ElPaso, Texas. Reports are very bad, many killed. Working with State and Local authorities, and Law Enforcement. Spoke to Governor to pledge total support of Federal Government. God be with you all!

"Spoke to Governor to pledge total support of Federal Government. God be with you all!" Trump added. White House Deputy Press Secretary Steven Groves said earlier that Trump had been briefed on the shooting "and we continue to monitor the situation." Groves added that Trump had spoken to Texas Gov. Greg Abbott as well as Attorney General William Barr.

Hours later, Groves said the president "continues to receive updates from his national security team on the tragic shootings in El Paso. Federal Government personnel, including the FBI and ATF, are on the ground in El Paso actively assisting local authorities, who are leading the response to the shootings. The President has pledged the full support of the Federal Government to Governor Abbott."

Vanessa Saenz, a witness, told Fox News that she heard several "pops" near the area and saw a man in a black shirt and cargo pants with a weapon shooting outside the building before entering the Walmart.

"He was just pointing at people and just shooting," she added. Another witness told Fox News that his mother died at the scene.

A witness told CBS News that he was about to enter the Walmart when he heard at least 10 gunshots and saw an elderly lady fall to the ground. He said he was not sure if she was shot.

A family of three was among a dozen people waiting outside a bus station. They were trying to return to their car that was in a blocked-off Walmart parking lot.

"I heard the shots but I thought they were hits, like roof construction," Adriana Quezada, 39, who was in the women's clothing section of Walmart with her two children, told The Associated Press.

Videos showed some injured people being brought to a nearby Sam's Club.

Abbott said the shooting was "a heinous and senseless act of violence."

"Our hearts go out to the victims of this horrific shooting and to the entire community in this time of loss," he said.

Texas Attorney General Ken Paxton said his office was "ready to give full support to all federal, state, and local law enforcement who are on the scene now and to those who will be conducting the ongoing investigation."

Democratic presidential candidate Beto O'Rourke, who used to represent El Paso in the House of Representatives, tweeted that the shooting was truly heartbreaking."

O'Rourke appeared shaken as he appeared at a candidate forum in Las Vegas on Saturday shortly after news of the shooting was reported. He said he had called his wife before taking the stage and said the shooting shatters "any illusion that we have that progress is inevitable" on tackling gun violence.

"We have to find some reason for optimism and hope or else we consign ourselves to a future where nearly 40,000 people are year will lose their lives to gun violence and I cannot accept that," O'Rourke said.

O'Rourke's campaign later said the candidate had canceled planned campaign events in Nevada and California. O'Rourke told reporters he was going back to El Paso to "be with my family and to be with my hometown."

The Democrat said he'd heard early reports that the shooter might have had a military-style weapon, saying we need to "keep that s--t on the battlefield and do not bring it into our communities."

Democratic Rep. Veronica Escobar tweeted that she is "utterly heartbroken" by the news of the shooting in El Paso and said she is monitoring the situation.

Utterly heartbroken by the developing news in El Paso. Monitoring the situation and in communication with our law enforcement. Please stay safe.

"Stay safe, El Paso. Please follow all directions of emergency personnel as we continue to get more updates," he tweeted.

My grandmother used to take me to Cielo Vista Mall. Now it's one more mass shooting scene. How many more must grieve before we act? #ElPaso

South Bend, Ind., Mayor and 2020 presidential candidate Pete Buttigieg also weighed, tweeting: "My grandmother used to take me to Cielo Vista Mall. Now it's one more mass shooting scene. How many more must grieve before we act? #ElPaso".

Saturday's shooting comes just days after a gunman opened fire at a Walmart in Northern Mississippi, leaving two dead and a police officer injured. In response to the latest shooting, Walmart tweeted: "We're in shock over the tragic events at Cielo Vista Mall in El Paso ... We're praying for the victims, the community & our associates, as well as the first responders. We're working closely with law enforcement & will update as appropriate.

And last week, a gunman killed three people - including a 6-year-old boy - before turning the gun on himself at a Northern California food festival.

El Paso, which has about 680,000 residents, is in West Texas sits across the border from Juarez, Mexico.

Police in El Paso, Texas say all bodies have been removed from the Walmart.

This is a developing story. Get updates on FOXNews.com.