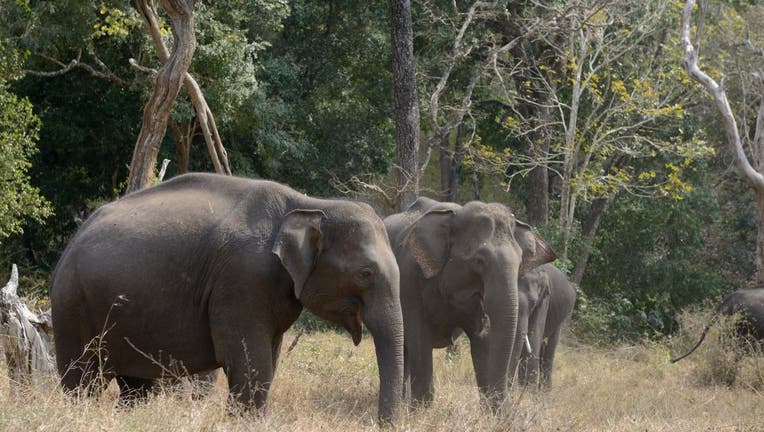 FILE: Forest elephant in Kerala on January 18, 2017 in India. (Photo by Frédéric Soltan/Corbis via Getty Images)

ODISHA, India - Bizarre animal stories are heard often, but none are quite like the latest vicious and deadly elephant attack of a 68-year-old woman in India.

Maya Murmu was collecting water in Raipai village, located in the Mayurbhanj district of Odisha, India, where a herd of elephants came her way. That's when she tried to flee, but one of the elephants rushed toward Murmu and trampled her, The Times of India reported.

She was rushed to the hospital but died from her injuries.

RELATED: A 326-pound Asian elephant calf was born at the Houston Zoo

MORE IN PETS AND ANIMALS

As the ceremony was taking place, The Times of India reported that a herd of elephants appeared from the forest, sending villagers running. They left Murmu's body behind.

One of the elephants then reportedly attacked the woman’s corpse by picking up the body and throwing it in the air.

In a video of the alleged incident published by The Times, a herd of elephants can be seen at the edge of the forest, with one chasing a villager as mourners yell toward the herd.

The herd then destroyed Murmu's home, with three other houses being damaged because of the attack.

No one else in the village was reported to be harmed.

A villager told The Times of India, "We were terrified after witnessing the elephant herd on Thursday evening. We have never had such a ferocious elephant bunch earlier."

Murmu's family was able to continue with the ceremony once the herd of elephants left the area.

According to The Print, the elephant in question had strayed from the Dalma Wildlife Sanctuary, which is more than 100 miles away from Odisha.

The level of violence from a usually peaceful creature has many wondering what could’ve caused such behavior.

One person tweeted, "Whatever that woman did to that elephant is the biggest mystery of the decade."

While there is no confirmation on the elephant’s motive, many users online speculate the woman was a part of a poacher group that killed the elephant’s baby.